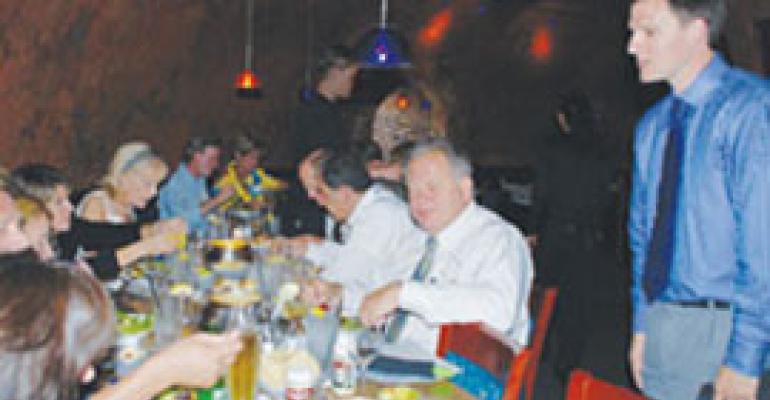 High gas prices and slumping confidence in the economy aren’t keeping all consumers from splurging to celebrate life’s special events, and that’s causing many independent and chain operators to focus their marketing efforts on private parties, banquets and catering.

Even as consumers embattled by the economic slowdown cut back on everyday dining out, many refuse to halt expenditures for special occasions, such as birthdays, anniversaries and graduations. And businesses, such as pharmaceutical companies, still rely on meals to seal deals, helping operators weather the downturn.

“If it wasn’t for private parties and business dinner meetings, I don’t think we’d be here,” said Gabriel Viti, chef-owner of 15-year-old Gabriel’s, a fine-dining restaurant in the affluent Chicago suburb of Highwood, Ill. “We would not be able to exist.”

Revenue growth at Gabriel’s has been uneven for the last quarter, Viti said. In April, revenues were up 28 percent year-over-year, but both May and June were flat, he said.

Thankfully, he said, pharmaceutical sales meetings, business groups and financial professionals based in the area continue to use his two private banquet rooms.

“Sunday through Thursday night it’s pretty soft [á la carte],” Viti said. “But those private dining rooms have saved us through the week, and from a cost-of-labor standpoint, you can use your same staff and don’t have to add anyone to the kitchen or the service staff.”

Another plus, Viti added, is that private parties are a high-margin business, especially if the host opts for an open bar. But the competition for business clients is heating up, Viti said, noting that such rivals as Morton’s Steakhouse and Brinker International’s Maggiano’s Little Italy also appear to be doing more private business dinners and lunches, and that both have installed Wi-Fi and teleconferencing monitors in their private dining rooms.

Twenty-four miles south of Highwood in downtown Chicago, Kelly Lohan, the senior catering manager for the recently renovated Palmer House Hilton, is charging about $75 a head to cater events in the 12-seat private banquet room in the hotel’s signature restaurant, the Lockwood Restaurant and Bar.

Opened last December, Lockwood has a private banquet room that is designed to resemble a modern wine room. The room is booked about 15 days a month, and that number is growing, Lohan said. Glowing reviews have triggered a wave of reservations for business meetings, wedding rehearsal dinners and other special events, she said.

At Winghouse, a 20-unit casual-dining chain based in Largo, Fla., local-store marketing of private parties is helping the company live up to its mantra: “We will not participate in any economic downturn,” said Tom Dunn, vice president of marketing.

Winghouse recently expanded the reach of its private-party business by unveiling a mobile catering vehicle that can deliver the chain’s signature menu items to picnics, family reunions, sporting events and other special occasions—indoors or outdoors—for several hundred people at a time.

Still in test in the Jacksonville, Fla., market, which is also home of the chain’s largest unit at 10,000 square feet, the mobile catering vehicle should enjoy strong demand during the coming football season, especially among college football fans, Dunn said.

John McDonald, a Marin County, Calif., franchisee of the 130-unit Melting Pot fondue chain, noted that although his customers tend to be affluent, they too are feeling the effects of the slowed economy. One way the Tampa, Fla.-based chain keeps private parties coming in is through Club Fondue, a program in which Melting Pot operators capture personal data about customers, such as birthdays, and then offer incentives to increase frequency.

Housed in a century-plus-old building originally constructed for a factory, McDonald’s Melting Pot is a lure in itself, remodeled with cave-like private dining environments for small groups. It seats about 176 people in total and boasts a well-stocked wine cellar.

Part of what makes dining at the Melting Pot special is that a few fondue courses are cooked at the table, adding an entertainment element to meals that are two to three hours long, McDonald said. The average check is $45.

Nino Catuogno, owner of Bricco Italian Ristorante in midtown Manhattan, estimated that his private-party business is up about 27 percent for the year. He attributed part of that growth to a local bridal magazine that featured Bricco as one of the best places in the city for wedding receptions or rehearsal dinners.

Otherwise, Catuogno said, he does little to promote the heavily reserved room except depend on word-of-mouth. He said several companies already have booked the room for their end-of-the-year holiday gatherings and that the first three weeks of December are already booked solid.

Catuogno estimated that the party room is booked 150 to 160 days a year and that after October, it’s heavily booked many nights until the New Year.

Catuogno said during the restaurant’s 12-year run he has developed about 10,000 regular guests, many of whom like the food and service enough to schedule their special events at Bricco.

“This has been a pretty good summer for us so far when it comes to the private parties,” Catuogno said. “Surprise birthday parties, wedding rehearsal dinners, business luncheons, wedding receptions made for a good May and June,” he said. “I know there is a lot on people’s minds with the economy and the high cost of everything, but I just love the way our guests depend on us for these private events.”

Salad Creations, a 50-unit salad chain based in Margate, Fla., is looking to private parties and catering events to boost overall revenues.

“We think we have tremendous growth ahead of us in private catering,” said John King, vice president of marketing for Salad Creations. “We think catering will be 20 [percent] to 30 percent of our business in time.”

Whether on-premise or catered off-site, King said demand for the company’s salads and soups is particularly strong in the medical profession, where sales pitches for new drugs or equipment often are given over lunch or dinner.