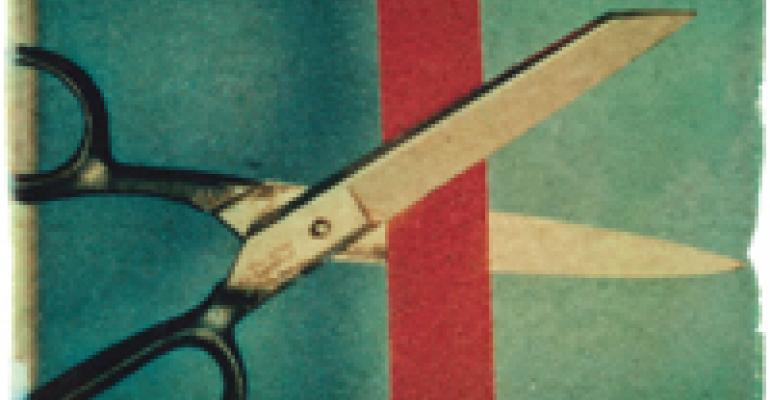 Operators’ hands are tied when bound by red tape

After investing about $1 million to renovate a prime, new location in Troy, Mich., Hooters of America Inc. officials planned to transfer a liquor license from one of their older locations nearby, which was scheduled to close.

Events, however, did not go as planned. What began as a relatively simple relocation has become a rancorous legal dispute mired in red tape.

After an unsuccessful attempt at a settlement, Hooters sued the city in state and federal courts, alleging arbitrary and unfair treatment and seeking $1 million in damages.

It’s not the first time public officials have attempted to block the way of a new Hooters restaurant, and it won’t be the last, says Mike McNeil, the chain’s vice president of marketing. For Hooters—and other operators nationwide—the process of dealing with red tape has become standard operating procedure.

From the multiple hoops that must be jumped through to begin building a new restaurant to the seemingly arbitrary ordinances that can tangle businesses in a legal web, operators say they are constantly anxious about that next rule-obsessed inspector, bureaucratic obstacle or paperwork mountain around the bend.

“It is harder and harder, and more and more expensive to get a restaurant developed today,” McNeil says. “You can be sure Ray Kroc didn’t face these kinds of challenges” when he was growing McDonald’s.

The amount of red tape a restaurateur may face depends largely on the jurisdiction and project in question. Where one city, county or state may seemingly pave the way for a new business, the next may make the opening of a restaurant a Sisyphean challenge.

When W.W. “Biff” Naylor bought the three-unit Du-Par’s restaurant chain in Los Angeles in 2004, he expected renovations of the landmark unit at the city’s historic farmers market to take about nine months.

Two years and 17 sets of drawings later, the family restaurant finally reopened to hungry throngs who cheered the return of Du-Par’s beloved French toast. The new and improved Du-Par’s now has an outside patio and a restored 1930s decor.

Naylor, a foodservice veteran whose father founded the now-extinct Tiny Naylor’s drive-in and coffeeshop chain, says he hadn’t anticipated the amount of work that was required to bring the building, which was built in 1938, up to code, or the number of inspectors needed to sign off on the project.

“In the old days, we had one guy that did it all,” Naylor says. “But the building was old. If we could have torn the building down and built it from scratch, it would have gone faster. But that was never on the table.”

Adding to that challenge was Naylor’s determination to recreate the original look of the nearly 70-year-old concept. In addition, the location was on a former oil-drilling site just a few blocks from the La Brea Tar Pits, an archeological landmark, requiring the approval of various state and federal officials for certain plans.

“They had our plans for over a month,” he says. “We didn’t unearth any mastodons, and we don’t plan to do any drilling, but we still had to go through it.”

Before the end of the year, Naylor plans to begin construction on an expansion and renovation of the Du-Par’s in nearby Studio City, Calif. “I don’t think that’ll be as tough,” he says. “We’ve gotten to know everybody involved, and they’ve gotten to know us.”

New operators who don’t know the ropes, however, often have a particularly hard time with red tape.

First-time restaurateurs Marcus and Kolea Marquez say they had hoped to open their $1.3 million L Wine Lounge in Sacramento, Calif., by last November. Things were moving along on schedule, until the couple learned that the air conditioning unit required for the 3,100-square-foot restaurant would not fit on the roof of the new mixed-use building.

“It took a lot of calculations to find a unit that would work with city codes without ripping up the roof,” Marcus Marquez says. Now the restaurant is scheduled to open in March, but he estimates the delay has added about $100,000 to opening costs.

Still, Kristi Daggett, the designer on the project who previously has worked on restaurants in Southern California, says she was amazed at how much easier it was to work with Sacramento officials than with those in Los Angeles, where “there’s so much going on, they’re just not that helpful.”

Daggett says the processes can vary dramatically from one municipality to another. In Los Angeles, for example, officials are less concerned about a restaurant’s façade than officials in cities like Santa Barbara, Calif., where buildings might have to have a Spanish red-tiled roof, even if it’s not included in the plans.

Operators sometimes can seek variances if their plans conflict with city codes. But doing so is a guaranteed red-tape delay, Daggett notes. “It’s a longer process, but at least you’re choosing that route,” she says.

Understanding the laws and procedures that apply to specific locations is key to navigating the perilous waters of red tape, says Dean McSherry, owner of Preferred Restaurant Services, or PRS, based in Dallas.

PRS offers management and other services, and McSherry has opened restaurants in 25 states. The company operates a Dick Clark’s American Bandstand Grill in Overland Park, Kan., for example, as well as the Swan Court restaurant in Dallas and six HMS Host airport concepts.

When asked to go into a new location, McSherry says he often starts with the local restaurant association. He also turns to seasoned restaurant veterans in the area for advice. “You want to find someone who knows the shortest way around,” he says.

One common red-tape stumbling block is obtaining a liquor license.

“People think they can just apply and it will show up in the mail,” he says. “It’s often not something that happens on your timeline. And if you open and that’s not ready, either you’re giving away liquor or not serving it.”

In New Jersey there are areas where no new liquor licenses are available, so operators either must wait for another restaurant to close or buy a liquor license from another operator that is willing to give it up.

Nonetheless, there are loopholes, McSherry says. Operators can borrow off a third party’s license, but that third party will likely charge fees that will seriously cut into profits.

In cities like Chicago, red tape trip-ups can result from not following the proper protocol with community leaders. There, city aldermen work with individual neighborhood advisory boards and typically have more control over building plan approvals.

Dan Heuertz, a PRS consultant in Chicago, advises operators to go to the alderman who represents their desired location first.

“If you have everyone else on board and not them first, it’s known they might not take kindly to that,” he says. “But if you play nice and get them on the same page from the start, you’ll have a better chance of approval.”

Each state has its nuances, McSherry says. In California, strict labor laws are a constant red-tape concern. In Florida, where hurricanes are a regular occurrence, the tricky issue is insurance, he says.

Want to open in an airport? In a post-9/11 world, get ready for headaches, from meeting strict security requirements for hiring employees to a “shift-by-shift knife check,” says Brian Colton, president of PRS Management, the company’s management arm.

“There is so much political and government red tape involved in airports,” Colton says. “To do one or two units is almost impossible to make it work. Only doing a good number of units will make it worthwhile.”

Many operators say another guaranteed red-tape nightmare is opening a restaurant in a historic district.

Getting the plans for the River Walk unit approved by city officials and the historical commission took eight to nine months, whereas other units typically completed the approval process in two to three months, he says. The historic commission was “part of the design team,” Norton says. “We’d have to submit certain forms even just to paint.”

Once construction was allowed to begin, delays were common because the tourist area did not have a place for vendors to pull up their trucks to deliver materials.

“They kept getting tickets,” Norton says. “We used to joke that we’d have to get everything air lifted in.”

When it came time to get a certificate of occupancy, the project stalled again because the person in charge had changed jobs. Norton tracked the woman down and camped out at her new office, politely but stubbornly insisting that she get the job done. He left with the necessary certificate.

Once the restaurant opened, the red tape didn’t stop. An ordinance was passed that made it a misdemeanor to stand on the sidewalk—a move aimed at stopping a late-night bar from allowing rowdy patrons to line up outside to get in.

One day a tourist who didn’t speak English was standing outside the restaurant. A policeman asked if he was a County Line patron. Not understanding the question, the tourist said, “Yes,” and the restaurant was charged with a misdemeanor for violating the queuing ordinance.

As a result, County Line officials had to go to court, though Norton says the judge “had some sense and threw the case out.”

Though going to court over red tape disputes may seem like adding fuel to the fire, Hooters officials say it can have its upsides.

The liquor license dispute in Troy has gotten plenty of press coverage, which helped pack the restaurant when the new location opened in January—without its liquor license.

Officials at the 430-unit Atlanta-based chain also have decided to keep the older restaurant open as well, even though it’s less than two miles away, much to the chagrin of the opposing residents known as the Troy Concerned Citizens Group.

As a result of the City Council’s action, says Hooters chief executive Coby Brooks, Troy is now “the city with the closest pair of Hooters anywhere in the world.”