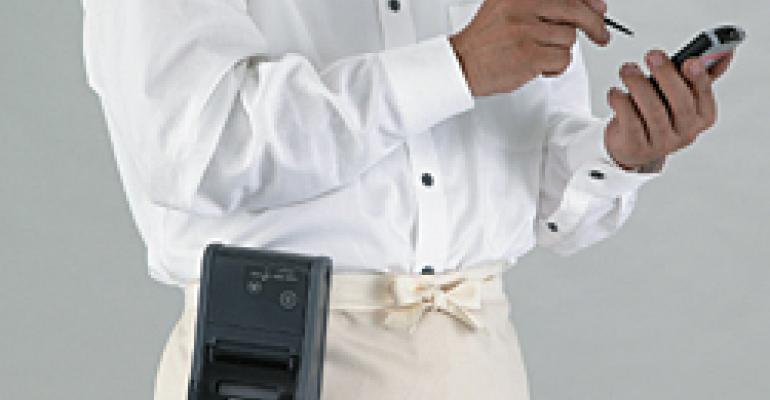 Considered commodity technology by some, printers nevertheless are being given new features by their makers and bigger roles in service, efficiency and marketing initiatives by many hospitality users.

Some establishments, such as independent quick-service barbecue restaurant operator Dixie Bones in Woodbridge, Va., are deploying more sophisticated belt-mounted lightweight wireless receipt printers. Others, such as the 59-unit Monical's Pizza chain of Bradley, Ill., are gravitating toward units that can print a variety of graphics directly onto receipts and whose design heads off damage from spills and food particles.

While portable wireless receipt printers have been around for several years, the newest models tout multiple connectivity options as well as other bells and whistles. For example, Long Beach, Calif.-based Epson America Inc. has configured the high-speed thermal units in its Mobilink series, whose list price officials pegged at around $999, to support both 802.11b and Bluetooth protocols. According to the vendor, the printers have a battery life of up to 10 hours using 802.11b connectivity and up to 20 hours if Bluetoooth is used.

Dixie Bones owner, founder and chairman Nelson Head decided to install wireless printers as a means of more rapidly moving patrons through the serving line. The restaurant has 14 tables that turn an average of 15 times per day and does a brisk takeout business; the latter accounts for almost one-third of all sales.

"During lunch hour, especially, the line would back up so much that we'd need to station a manager at the counter to keep things moving," Head noted. He said he evaluated offerings from several vendors but chose Epson's Mobilink line primarily because of the superior battery run time, compared with the other makes he investigated.

Dixie Bones uses the printers in tandem with Symbol MC50 hand-held enterprise digital assistants, or EDAs, running Digital Dining software. Servers enter customers' orders into the EDAs as diners wait in line and immediately initiate the printing of receipts via an 802.11b connection. No server has ever had to stop to change a battery, Head reported.

While he declined to specify his investment in the technology and was unable to put his fingers on an exact ROI, Head said the wireless printers definitely permit customers to be served in a more efficient manner and to "get out faster," resulting in "substantially increased sales" and "bigger tips for wait staff."

Club Red, a nightclub in Jonesboro, Ark., is seeing similar benefits from a combination of the Mobilink printers, Symbol Technologies EDAs and Digital Dining software, according to co-owner Jerry Skelton. The club hosts 1,100 to 1,200 people on any given weekend and does 92 percent of its business between 11 p.m. and 2 a.m.

"We operate in a college town, so we have high employee turnover, and with the short window of time for capturing most sales, we needed servers to operate more efficiently," Skelton explained.

Apart from helping to build sales, Skelton said the mobile POS and printer setup has generated an 18-percent to 22-percent return on investment via labor savings by permitting servers to take more orders in less time. That enhanced efficiency made possible a thinning of the wait staff ranks, the operator indicated.

Skelton said he, too, appreciates the flexibility afforded by the Epson printer's support for multiple connectivity protocols.

Meanwhile, a desire to simultaneously do a better job of marketing to customers and minimize equipment breakdowns led executives of Monical's to replace the five to eight thermal printers used in each of its stores with inkjet printers.

The thermal printers previously used by Monical's caused problems because the thermal paper they required often turned black, resulting in illegible tickets, according to information systems coordinator Doug Davis. Also an issue with the previous printers, he said, was how the horizontally oriented paper-holding component would "catch everything — from dough, to sauce, to paper clips," and the inability of those devices to generate receipts that contained coupons, multiple colors and other means of attracting customers' attention.

By contrast, Davis explained, the chain's Ithaca POSjet 1000 inkjet kitchen printers, from TransAct Technologies of Hamden, Conn., allow it to crank out two-color graphics, logos and coupons in any combination of red, black, green and blue, rather than in set pairings. "We are capturing customers' attention better through this feature, surely," Davis said of the printers, which cost approximately $300 apiece.

He added that because units have vertically positioned paper chutes and are bottomless, foreign particles fall through to the counter rather than getting caught, thereby eliminating big maintenance bills.

Star Micronics' latest entrant into the thermal paper output marketplace is the TSP100 futurePRNT series of receipt printers, starting at $600. Printers in the new line come with a number of software utilities, including an image import tool that allows an unlimited number of monochromatic or color jpeg, gif and bmp files to be accessed through the control panel, saved by name and prepared for output without being pre-sized or pre-saved.