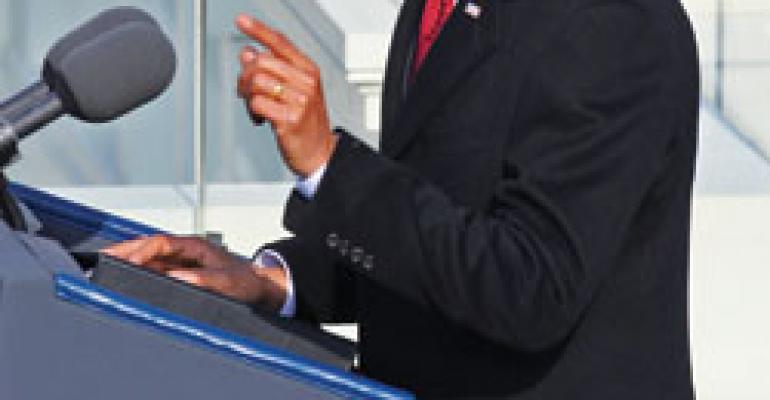 In his inaugural address as the 44th president of the United States, Barack Obama chose to focus on restaurants as a way of illustrating the monumental changes that have shaped this nation over the recent decades.

Speaking to millions of people around the world, Obama underscored the magnitude of the occasion when he declared, “… a man whose father less than 60 years ago might not have been served at a local restaurant can now stand before you to take a most sacred oath.”

The president’s speech recalled America’s painful civil rights struggles and the fact that some restaurants were not always the welcoming places they are today. At the same time, it served to remind listeners of how far the country has progressed by embracing inclusion and by working together to overcome challenges, a major theme of Obama’s inauguration and a sentiment that restaurant industry members hope is in earnest as the administration tackles the pressing issues ahead.

Acknowledging that the United States is in the midst of a crisis and the economy is “badly weakened,” Obama urged Americans “to embrace a new era of responsibility—a recognition, on the part of every American, that we have duties to ourselves, our nation, and the world, duties that we do not grudgingly accept but rather seize gladly, firm in the knowledge that there is nothing so satisfying to the spirit, so defining of our character, than giving our all to a difficult task.”

As the restaurant community struggles to adjust to the uncertain economic future unfolding in the new year, many operators, in fact, are hoping that the industry will have a role in shaping the future and working with the Obama White House to guide the economy and the nation out of the current danger zone.

By the same token, many are genuinely concerned that the new administration and the 111th Congress might pursue a series of legislative initiatives they feel would ultimately be damaging to their businesses, such as union card check, paid sick leave, menu-labeling and health care mandates for businesses.

But while those concerns are indeed top of mind, restaurant officials nevertheless are expressing a sense of optimism that the new president is not planning to operate in a vacuum or unilaterally drive legislation that might harm elements of an economy already under intense pressure.

“They’ve reached out to us, and we responded to them,” Gay says. “We talked to members of the transition team on three different occasions about business issues and immigration. They’ve been very receptive to our input so far.”

One association member who was involved in those meetings was Daniel Halpern, chief executive and president of Atlanta-based Jackmont Hospitality Inc., the operator of 10 T.G.I. Friday’s franchised locations and an on-site foodservice division. During the presidential campaign, Halpern served as a member of Obama’s national finance committee and later as a trustee of the inaugural.

“We’ve had the opportunity to have dialogues with the transition team, and the door is open,” Halpern says. “They want to work together. They were very inclined to listen to us. There are times when we agree and times when we don’t agree. But [Obama] sees the big picture. He sees the challenges and knows we will only get there if he has everybody’s help.

“At the end of the day, I think it’s critically important to be engaged, to be at the table as public policy is discussed. We need to let [the administration] know that as an industry we want to be part of the process.”

Even some operators who supported Sen. John McCain, R-Ariz., in the presidential election, express hope about the new president.

“I voted Republican,” says Ted Balestreri, chief executive of The Sardine Factory in Monterey, Calif., “and I hope he’s the greatest president that ever lived. He struggled to get where he is, so I feel he will have a sensitivity to the hospitality industry. I think he’ll be sensitive to rank and file because it’s mostly small businesses, and that’s where I think his compassion will be.”

“He doesn’t make a quick decision,” he says, “and that’s good because no news coming out of Washington is good news.”

While associations and members of the restaurant community are hoping to work with the Obama administration on issues affecting the industry, none doubt that the first issue on his plate will be the troubled economy.

“Labor employment issues, nutrition labeling, food prices are all going to be issues we would like to see addressed,” says Scott Vinson, vice president of the National Council of Chain Restaurants. “But as important as those issues are to our industry, the administration is dealing with larger issues right now and will be for several months to come. Getting the economy going again will be job No. 1 for this administration.”

One of Obama’s first challenges is getting Congress to free up the remaining $350 billion in funding from the $700 billion Troubled Asset Relief Program passed last fall to help the ailing banking industry. David French, vice president of government relations for the International Franchise Association, says the second infusion of funds into the nation’s troubled banking system could help to strengthen the hobbled credit markets, freeing up financing for businesses.

“There’s not a lot of credit on the streets,” he says, “and that’s made it challenging for businesses to expand or even simply to get loans that will allow them to continue to operate. If you don’t already have money in the banks to begin with, they are not very enthusiastic about lending.”

“Credit is a big, big issue for the industry,” Gay says. “But the question is, how do you get the spigot turned back on?”

Beyond that, many in the foodservice industry are hoping that Congress enacts Obama’s $819 billion economic-stimulus package rapidly, although some federal lawmakers already have voiced concern about different portions of the plan. At press time the House of Representatives had approved the package in a 244-188 vote. No Republicans had supported the proposal. The Senate was expected to take up the measure in coming days.

One popular element of the package, called the American Recovery and Reinvestment Act, is tax relief for individuals, which would offer each person a $500 tax credit or $1,000 for a working family.

“That would be the kind of thing that would help with disposable income,” Gay says.

Many also feel that Obama’s plan to put millions of Americans to work to help rebuild elements of the nation’s infrastructure, a spending program on a scale not seen since the days of President Franklin Delano Roosevelt, could also help stimulate spending.

In addition, the plan also calls for the creation of 499,000 jobs in the leisure and hospitality industry by the fourth quarter of 2010.

Obama’s stimulus package also would extend expired tax breaks from the 2008 stimulus package signed by President Bush, which includes a “bonus depreciation” break enabling businesses to write off more of their purchases more quickly and an increase in small-business expensing limits. Businesses also could apply current losses to taxes paid back as far as five years ago instead of two, yielding an immediate cash windfall. At the same time, businesses would receive a $3,000 tax credit for every job they create.

Michelle Reinke, the NRA’s director of legislative affairs, says all of those fixes would be short-term solutions, lasting only a couple of years, rather than permanent changes to the tax code, “but they would be a stimulus to get things going again.”

However, while association officials and operators are hopeful their message will be heard in the White House, they remain concerned about certain pending legislation. Card check union organizing remains one of the industry’s legislative hot buttons in the 111th Congress. On the campaign trail Obama had voiced support of the measure, which is backed strongly by organized labor.

The bill, which is called the Employee Free Choice Act, seeks to alter the process by which a business decides whether it wants to unionize or not. The bill would remove employees’ right to private-ballot elections and replace it with a card check system in which they would sign a card in favor of union representation. In 2007 it was passed in the House of Representatives but failed to get the 60 votes needed in the Senate, although Obama voted for it.

More recently, though, many observers believe the Obama administration has begun to backpedal in its support of the bill, which unions are lobbying heavily. Following a meeting with the president, The Washington Post recently reported: “The president-elect also gave his support for legislation that would make it easier for workers to unionize, but he said there may be other ways to achieve the same goal without angering businesses.

“And while many Democrats on Capitol Hill are eager to see a quick vote on that bill, he indicated no desire to rush into the contentious issue. ‘If we’re losing half a million jobs a month, then there are no jobs to unionize, so my focus first is on those key economic priority items I just mentioned,’ he said.”

At the same time, Hilda Solis, the newly confirmed labor secretary, steered clear of any discussion on the issue during her Senate confirmation hearing recently.

Gay expects the measure to come up for debate early this year in the House and later in the Senate.

“But we think that we and others in the business community have made it clear that this is a dogfight of an issue, and that if the Obama administration pushed it, that would sour the well early on,” he says.

However, the foodservice industry also is following several other pressing labor-related initiatives in Congress that could present problems. Paid sick leave legislation, which Obama supported during the campaign, is an issue the industry has been tracking. A measure has been proposed that would provide workers with seven days of paid sick leave a year for those who work 30 or more hours a week. The benefit would be prorated for part-time workers.

Another bill the IFA’s French cites as a potential problem is the Re-Empowerment of Skilled and Professional Employees and Construction Tradeworkers Act. The measure would change the status of frontline supervisors in some establishments, classifying them as nonsupervisors. It potentially could enable unions to collect more money in compulsory dues from supervisors, who currently don’t pay union dues; allow for more litigation; and make it easier to unionize.

“Taken together with card check, this could be a perfect storm,” French says.

Another labor-related measure that was being monitored by the industry is the Lilly Ledbetter Fair Pay Act, which was drafted to counteract a Supreme Court ruling that limits how long workers can wait before suing for pay discrimination. In late January both the House and Senate passed the act, which Obama subsequently signed into law Jan. 29.

Health care reform is another hot-button issue for the industry. Obama’s selection of former Senate majority leader Thomas Daschle to serve as secretary of the Department of Health and Human Services is an indication the president means business on the health care reform front, experts say. Gay adds that Sen. Ted Kennedy, D-Mass., also is motivated to address the health care issue, although no single bill has been crafted yet.

“It’s such a big issue,” Gay says. “I don’t want to predict it will have a resolution this year. But there will certainly be a lot of activity on it.”

Food safety is another issue of concern, particularly in the light of the recent salmonella outbreak linked to peanut butter. The NRA recently called on members of Congress to implement food safety reform, urging such actions as requiring food manufacturers to conduct evaluation of food safety risks.

“Food safety is still an issue that we have to deal with,” says John Farquharson, current president of the NRA’s International Food Safety Council and the retired president of Aramark Food Service. “I hope the new president thinks about it and addresses it.”