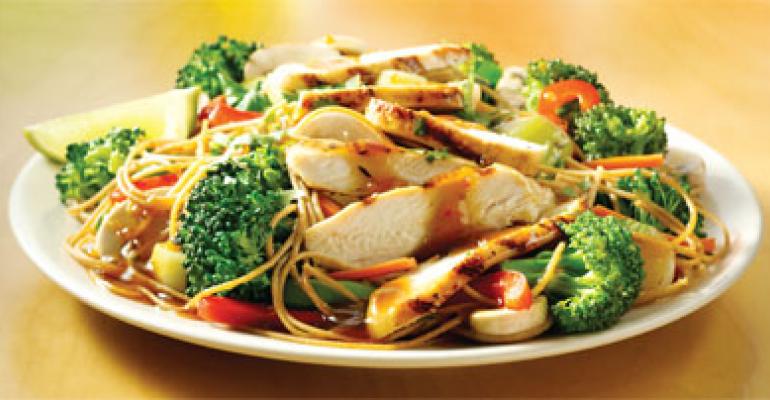 When the “barbell” concept first entered the restaurant industry’s consciousness, it was focused on price. Operators who said they were implementing a barbell strategy meant that they were offering items at both low price points and high ones.

In the years since, the barbell strategy has grown beyond price to include any instance in which contradictory offerings balance each other — and right now the barbell strategy’s muscle is most often directed at nutrition, with healthful items and indulgent ones inhabiting the same menus.

No restaurant operator can avoid talk of healthful foods — not even at Heart Attack Grill, where they are mere punch line fodder. But despite a steady increase in the number of calorie-conscious offerings, customers have yet to buy them consistently, which is where the barbell comes in.

For instance, Denny’s boasts that its Chicken Deluxe Salad has 15 grams of fat or less when ordered with grilled chicken, fat-free dressing and no bread. Customers looking for something more decadent, however, can find it in Denny’s Fried Cheese Melt, featuring four fried mozzarella sticks and melted American cheese served on sourdough bread with a side of fries.

According to menu analysts who view healthful foods as long-term business builders, while most customers still use restaurant meals as treats, more are seeking “better for you” items alongside the indulgent.

Leslie Kerr, president of Boston-based Intellaprice, said operators will have to be more skilled than ever at balancing the barbell of indulgent choices with beneficial ones.

“Some customers listen to the devil on their shoulder, while others pay attention to the angel,” she said. “And if you have something on the menu to satisfy both, you’ve made incremental sales off one while avoiding losing out on the other.”

Kerr credited casual- and fine-dining players as leaders in providing healthful offerings, and pointed to Applebee’s “Under 550 Calories” menu selection. Even further evolved is Seasons 52’s menu, which includes nothing over 475 calories. Quick-service and fast-casual concepts, she predicts, will need to follow suit sooner rather than later.

“QSR is going to have to work to make room to get these items on the menu,” she said. “Sure, you can get a salad and go light on the dressing or get a burger without the bun at those places, but what I expect to happen is these restaurants will move closer toward making decadent products better for you.”

That should draw customers in, said Eric Giandelone, director of foodservice research at Chicago-based Mintel.

“They tell themselves they’ll be good this time and get the fish, but they end up getting fried chicken instead,” Giandelone said.

Still, QSR operators have found success with their price-oriented barbell strategies. McDonald’s in October 2010 reported a 10-percent increase in third-quarter profit, driven in large part by its barbell strategy of promoting both its Dollar Menu on one end and its higher-margin frappés and smoothies on the other.

Observers expect health-oriented barbell strategies will pay off in the long run, too.
While healthful items tend to be relegated to the back of many menus for now, that will change as customers age and gravitate increasingly toward diet-friendly options, said Darren Tristano, executive vice president at Chicago-based Technomic.

“That gives restaurants a great opportunity to build loyalty with current and new customers,” he said, in support of a health-oriented barbell strategy. “That choice gives them what they want, when they want it.”