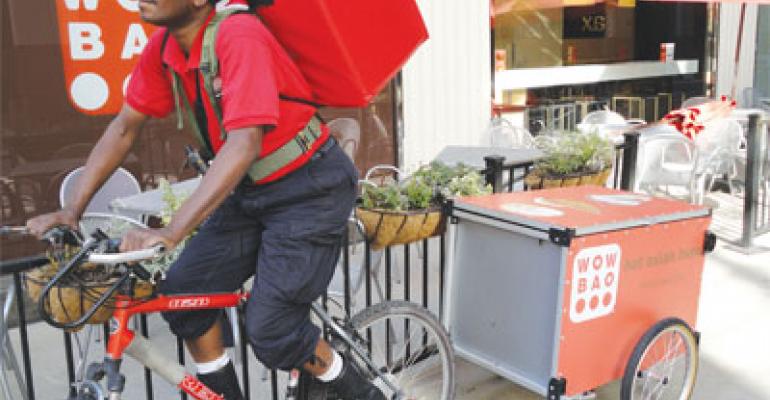 NRN 50: Have menu, will travel

The potential to boost sales and profits through such flexible-service programs as off-premise catering, delivery and expanded takeout is not being ignored by restaurant operators with products well suited to travel.

Packaged Facts, a Rockville, Md.-based research firm, said its forecast of growth in domestic catering sales of 9.1 percent in 2011 and 6.5 percent in 2012 will be “driven primarily by aggressive expansion into the catering space by limited-service establishments, the return of business event-driven spending [and] higher wedding spending.”

Restaurateurs are likely to steal share from “vulnerable” freestanding caterers along the way, it said. The report estimated that the domestic catering industry generated $14.2 billion in sales in 2010.

Hien Tran, proprietor of Abby’s Cafe & Bakery, a kettle-boiled bagel shop in a north Houston strip center, is among the limited-service operators with an interest in catering. He said catering represents about 30 percent of his total sales and generates average order sizes of $200 to $300, compared with his in-restaurant check average of $7 to $9.

“We have to pay fixed operating costs anyway, so [catering] is add-on business that lowers the cost of sales,” Tran said. He added it also has a beneficial impact on profits, even after paying Vmeals.com, an online marketing, order aggregation and payment processing services firm.

He said he shares 25 percent of all transactions processed by Vmeals, which amounts to about 35 percent of his catering sales.

“It would be too much of a headache” to manage in-house the business affiliated with the more than 200 catering clients that use Vmeals, particularly at current staffing levels, Tran said, and it wouldn’t be worth it to hire another employee for that task.
Geoff Alexander, managing partner of four-unit Wow Bao of Chicago, a “hot Asian buns” concept, also is willing to put up with lower margins for the opportunity of reaping greater profits through catering and delivery operations. He said the much larger average size of delivery and catering orders compared with in-restaurant transactions means that he typically makes more than three times the profit on delivery orders, even after paying bicycle delivery riders to transport food to customers.

Panera Bread Co., which for the third quarter ended Sept. 28 operated 605 company bakery-cafe restaurants and franchised 816 to others, values catering business.
Chief executive Bill Moreton in late October said Panera catering sales, year to date, had climbed 23 percent, and added, “We believe catering can add a half of a percent to comp-store sales for the foreseeable future.” He said 2011 will see more online ordering support for catering and improvements in packaging.

Independent and chain restaurateurs increasingly are turning to desktop or Web-based catering production or sales-management software to help them with that aspect of their business, as well as to third-party order aggregating services.
Many pizza and some sub chains, including Jimmy John’s Gourmet Sandwiches of Champaign, Ill., have long offered delivery. But a number of other concepts in recent months began testing or offering delivery, including the operators of more than 300 franchised Subway restaurants in the Washington, D.C., area that are part of the multi-state 888-SUB-TO-GO network, the Los Angeles-based Pinkberry frozen yogurt chain, and a San Francisco franchisee of the Johnny Rockets burgers-and-shakes chain of Lake Forest, Calif.

Some restaurant chains — including Burgerville, Qdoba, Sizzler, Dairy Queen and Gold Star Chili — are riding the gourmet food truck trend to a more distinctive catering presence by using branded rolling kitchens for one-time affairs in the field.
Full-service concepts looking to maximize production capabilities and guest relationships long have sought additional on-premise catering or private party opportunities, but many have stretched in recent years to capture off-premise sales. Among them are BJ’s Restaurants Inc., which offers delivery service from many of its 102 restaurants, and Bob Evans Farms Inc., where executives hope a push for carryout sales at the company’s namesake chain will help reverse sliding sales.

Chief executive Steve Davis and other executives said, at five Ohio Bob Evans stores equipped with a “Taste of the Farm” grab-and-go area to push carryout, off-premise sales are outpacing the rest of the 569-unit system. Carryout sales now represent 11 percent of total sales at Bob Evans, and the family chain could grow that number through advertising initiatives, among others, executives said.