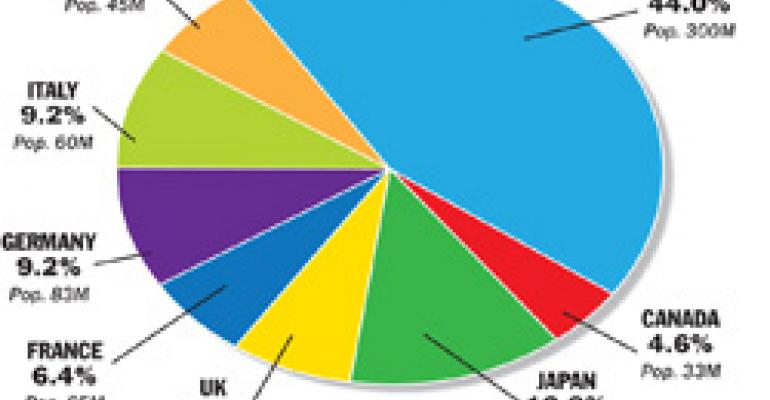 Despite the global economic melt-down, there are still opportunities to grow business abroad. But to tap those opportunities, operators need to find just the right value proposition, according to new data from The NPD Group.

While deals and promotions helped drive the small traffic growth at U.S. restaurants in 2008, such value-oriented practices are largely unfamiliar in other countries, the Port Washington, N.Y.-based market research found. Instead, product variety plays a larger role internationally.

“The global foodservice market is weak, but like any market there are pockets of strength,” said Bob O’Brien, NPD senior vice president of foodservice. “There’s an opportunity to grow, but it requires understanding.”

Only U.S. operators last year boosted the number of deals they offered in the face of weak demand. Deals and promotions at domestic restaurants increased 6 percent in 2008, while nonpromotional transactions declined 1 percent, NPD found. Such dealing was responsible for all of the traffic growth at U.S. restaurants last year.

By contrast, in Canada, France, Germany, Italy, Japan, Spain and the United Kingdom, there was no increase in the use of deals and promotions, NPD found.

“[Deals and promotions are] still new across Europe,” O’Brien said. “They’re much more aggressive with variety.”

O’Brien noted, however, that many international markets did not fare well in 2008.

“[Dealing] could have helped them more,” he said.

One reason for the lower usage of deals abroad may be that international consumers are not feeling the impact of the recession in the same way Americans are, observers say.

“The whole world is affected by this recession, but in different ways,” said Philip F. Zeidman, a partner at DLA Piper, a Washington, D.C.-based law firm specializing in franchising. “The general malaise that has gripped this country is not one that has reached other countries yet.”

Nonetheless, much of the world has grown cost-conscious, said Michelle Greenwald, a marketing professor at New York University and Columbia University business schools who specializes in the nexus between foodservice and culture.

“Everybody is trying to save money; everybody is cost-conscious,” she said. “[In Europe] people are eating at home more.”

Still, the appetites of the dining public here and abroad are worth pursuing, NPD found.

“There were few spots where there was any excitement or growth,” O’Brien said. “[In 2008, Canada was] the only country around the world that had measurable, noticeable growth in traffic and sales.”

While the types of restaurants consumers visited varied by country, the popularity of some categories was widespread, NPD found. Looking across all categories, only quick-service hamburger grew in all eight countries. Two other categories, coffee specialty and quick-service sandwich/bakery, grew in five of the eight countries. Full-service East Asian cuisines and quick-service traditional cuisines grew in half of the markets. Varied-menu categories, which are generally made up of independent concepts, were weak in nearly every country. Other categories that were broadly weak were full-service fish concepts, frozen sweets outlets and retail.

No matter where they dined, consumers in the majority of countries visited restaurants most for their main meal. While the morning meal and snack dayparts were responsible for the modest traffic growth in the U.S. and Canada last year, main meals generated the most widespread growth in 2008. Dinner traffic was up in Canada, Japan, the United Kingdom, France and Italy. Morning meals were down everywhere except in the United States and Canada, and evening snacks were down everywhere except the United States, Canada and France.

Many industry experts believe that offering deals is the answer to getting consumers to visit restaurants more often—no matter where those restaurants are located.

“In this economy, many businesses are deal-driven,” said Bill Guilfoyle, a marketing instructor at The Culinary Institute of America in Hyde Park, N.Y. “Unless you offer, they won’t have the motivation to come to your restaurant.”

While the recession has left many major chains struggling to keep their heads above water, there is one quick-service chain that seems to know exactly what consumers around the globe want. For the last six years Oak Brook, Ill.-based McDonald’s has posted positive comparable sales in Europe, where it has a total of more than 4,200 units in France, Germany, Italy, Spain and the United Kingdom. European comparable sales were up more than 3 percent in the first quarter of 2009.

While the chain attributes its European growth, at least in part, to a multitiered pricing strategy, it says deals alone aren’t the only drivers of traffic or sales.

“Each market has an everyday-affordability platform consistent with our commitment to value,” said McDonald’s spokeswoman Heidi Barker. “We offer promotions and couponing and dealing where it makes sense. But value overall is what drives our business.”

Part of the tiered strategy is to offer smaller-portioned, mid-priced options. For example, in France McDonald’s offers the P’Tit Plaisirs, or “small pleasures”, menu, which includes items such as wraps and small burgers and chicken sandwiches. The fast feeder also offers tweaked versions of its popular Dollar Menu abroad, including the Euro Saver in Europe and the Pound Saver in the United Kingdom.