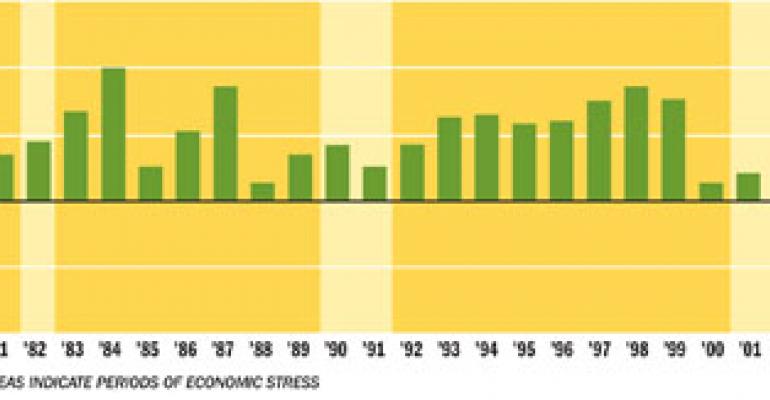 Changing consumer behavior will make this economic slowdown like none the restaurant industry has seen before, according to a new report from The NPD Group.

Even as restaurants feel the pinch of slowed spending by skittish consumers, other trends—like the shift from meals to snacking, more ready-to-eat meal options and fewer women entering the workforce—are exacerbating the situation, the Port Washington, N.Y.-based research firm found.

“While the economic situation is having an impact on consumer confidence and behavior, this particular slowdown goes beyond just plain economics,” said Bonnie Riggs, an NPD analyst. “We are seeing a shift in consumer behavior as it relates to consumer purchase behavior.”

In fact, according to NPD, a bad economy does not always translate into slowed restaurant traffic. Although the restaurant industry has experienced five economic downturns in the last three decades, four of which were recessions, not all these periods of economic stress resulted in traffic declines.

“Each recession had unique characteristics…different things that caused the recession,” Riggs said. “Today’s slowing economy is having its impact on the restaurant industry, and there is a lot that can be learned from the past.”

In 1982, and again in 1990 and 1991, the country experienced not just economic downturns, but recessions. A recession is defined as two or more consecutive quarters of negative gross domestic product. Despite the recessions, however, restaurant industry traffic did not decline during those periods and the industry was virtually unscathed. According to NPD’s data, in 1982 traffic was up almost 2 percent over the previous year. In 1990, traffic increased 2 percent over the prior year, and it inched up another 1 percent in 1991.

“Operators learned some things [from the previous downturn],” Riggs said, explaining why traffic did not decline during these periods. “They cannot pass on all high food costs to consumers.”

But the steps operators took to drive traffic in the early 1980s and 1990s weren’t enough to combat the many forces—from corporate scandals to Sept. 11 to the war in Afghanistan—that were working against the industry in 2001, 2002 and 2003. Although traffic didn’t dip nearly as much earlier this decade as it did in the late 1970s, NPD found the slowdown from 2001 to 2003 to be one of the longest periods of sluggishness for the industry. According to the data, traffic declined 1 percent in 2002, after only a modest 1-percent gain the prior year. Traffic continued to decline in 2003, dipping another half percent.

Today, customers once again are reining in their eating out. Total customer traffic was up barely 1 percent in 2007, according to NPD.

In February, NPD asked consumers who had visited a restaurant in the past 30 days how rising food costs were affecting their eating-out behavior. More than one-third of respondents said they were visiting restaurants less often, while nearly a third said they were cooking more at home. A significant portion of respondents also noted that when they did eat out they still were looking for ways to save money. For instance, they said they were more likely to have tap water as a beverage, look for restaurants offering specials, order from value menus and order less expensive entrées.

The shift in consumer purchase behavior can be seen in daypart performance as well, NPD found.

“We’re not seeing that this time around,” Riggs said. “[Supper] is taking a hard hit.”

According to NPD, there’s been little growth in supper traffic since 2000. In the year ended November 2007, supper traffic declined nearly 2 percent, after posting no growth the year earlier.

Typically, lunch is most affected by recessions led by high unemployment, such as in 1982, NPD found. Despite what experts say is a fully employed economy, the data reveal that lunch traffic has been slowing, and at times has trended down, for the last few years. In the year ended November 2007, lunch traffic was flat, after slowing 1 percent the year earlier.

Over the years, the morning meal has fared well during stressful economic periods and continues to perform well in the current downturn. Morning meal traffic has been on the rise since 2002. In the year ended November 2007, morning traffic was up more than 5 percent, after growing more than 4 percent in the prior year.

While snacks, considered the most discretionary meal, are usually among the first to go during tough times, there has been strong growth for the meal occasion in recent years. In the year ended November 2007, snack traffic was up nearly 4 percent, after growing 4 percent the year earlier.

During the current downturn, consumers also are straying from their historic tendency to eat more meals off-premise, NPD found.

In the past, convenience needs, largely driven by the growing number of women entering the work-force, supported the off-premise side of the business, Riggs noted. However, with the growth of women entering the workforce stalled since the early 2000s, that support has diminished. In addition, time-pressed consumers have more off-premise meal options than ever before.

“Even though inflation at supermarkets is the highest it’s been in 17 years, there are more fast, inexpensive options available to consumers at grocery stores that didn’t exist years ago,” Riggs said. “The ready-to-eat meals, frozen meals, etc., have multiplied over the years, giving consumers more options and putting downward additional pressure on the restaurant industry.”

The housing crisis and the weak U.S. dollar also make this downturn unlike any other, Riggs noted.

Despite the challenges ahead, Riggs said there are steps operators can take to help themselves.

For the operators who thrive during difficult economic times, the secret is not about offering something new and trendy, but doing what they already do even better.

Glendale, Calif.-based IHOP ,which celebrates its 50th anniversary this year, attributes its survival, at least in part, to continuous improvement. Although IHOP has had its ups and downs over the last half-century, the 1,344-unit chain has reported 20 consecutive quarters of positive same-store sales.

“You have to evolve but give people what they expect,” said IHOP spokesman Patrick Lenow. “We’re not going to let a tough economy get us off our game.”

Since its inception in 1983, Burlington, Vt.-based Bruegger’s Bagels has survived through everything from challenging economic times to a change in ownership to the Atkins Diet craze. Currently, the 275-unit fast-casual bakery chain is on its 15th consecutive quarter of same-store sales growth. One key reason it has been able to maintain and grow customer visits, particularly at lunchtime, in the current economy is its commitment to customer service, officials said.

“We have focused extensively over the last three years on guest service,” said Chris Cheek, vice president of franchise development for Bruegger’s. “What that translates into is [we’ve] become the neighborhood bakery of choice.”