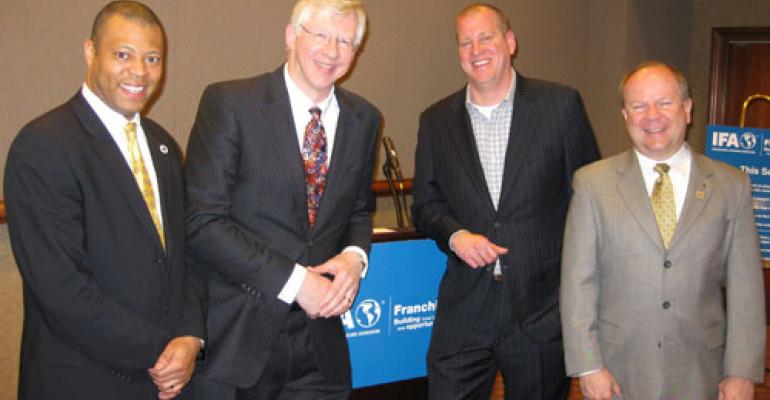 At the IFA show, experts discussed how to help franchise owners secure capital

A larger number of franchisors are acting as bankers for their franchisees as the industry emerges from the recession and liquidity remains tight.

A panel discussion at the International Franchise Association convention this week focused on how restaurant companies and other franchisors have developed programs over the years to help franchisees secure growth capital. It's a situation that may be the "new normal" for franchise systems.

“As funding became more difficult over the past few years, many franchisors have become very creative in helping to provide some form of financing to their franchisees,” said Kevin P. Hein, partner at Faegre & Benson LLP in Denver and moderator of the panel discussion.

Panelist Reginald Heard, president and chief executive of Bankers One Capital, said franchisors could help their franchisees in a variety of ways, such as providing financing themselves, helping operators work with banks to obtain credit, or seeking out smaller lenders like credit unions.

“I don’t see anytime in the foreseeable future where franchisors will find one or two national lenders that will be your one-stop-shop for doing every deal,” he said.

Panelist Kenneth Switzer, vice president and chief financial officer for the 225-unit Marco’s Pizza of Toledo, Ohio, said the chain has several programs aimed at helping franchisees open new stores, including ones that provide them financing or guarantee their loans with banks.

“There’s a tremendous need for capital,” he said, noting that “half our growth over the past few years has been a result, in way or another, of our finance programs.”

In 2007, before the recession, Marco’s created a captive-leasing company, Marco’s Franchise Services Leasing Co., to help franchisees obtain equipment with about $2.5 million of leases in place, Switzer said.

As the recession tightened its grip in September 2008, Marco’s created a private-equity fund through an affiliate to help finance franchisee growth. Later, the chain formed a loan-loss entity, called Marco’s Assurance, which provides $50,000 loan guarantees to banks on typical $200,000 loans.

While Marco’s has not yet had to honor any of those guarantees, Switzer said, “It tells the bank we make a strong commitment to support our franchisees.”

“The problem with letting franchisees go out there completely on their own, and not only present the deal but represent your brand, is a mistake,” he said. “You really have to be proactive. It’s competition for capital. Banks are looking at deals that have strong sponsorship.”

Outside the restaurant industry, panelist Scott D. Frith, vice president of marketing and franchise development for Lawn Doctor Inc., said his company offers $40,000 loans at 12 percent interest to franchisees, a program the company has offered for more than 15 years.

“It takes a lot of anxiety off the table,” he said. “I come across a lot of franchisees who are engaged in the process and can’t get the financing. If that issue is off the table, it keeps the deal in play and takes them to the next level of executing the franchise agreement.”

Marco’s Switzer also offered details about the costs associated with the company’s franchisee assistance programs. For the captive-leasing company, he said costs totaled about $15,000 to set up documents and a warehouse line of credit, plus about 120 hours of staff labor. To set up the private-equity fund, he explained, “it was a far more complex effort,” involving a private placement and document drafting, and was “in the range of $40,000.”

In addition, Switzer said he hired two employees and invested time to deal with legal issues such as disclosure documents, state and local sales tax permits for leasing payments, and working with franchise councils to deal with other issues.

As the recession eases, Switzer said he foresees the company’s financing options would be attractive to potential franchisees and would help non-traditional candidates, such as area supervisors, become franchise owners.

“The time is coming very soon for us to be a little more proactive in using the financing arm as a development tool,” Switzer said.