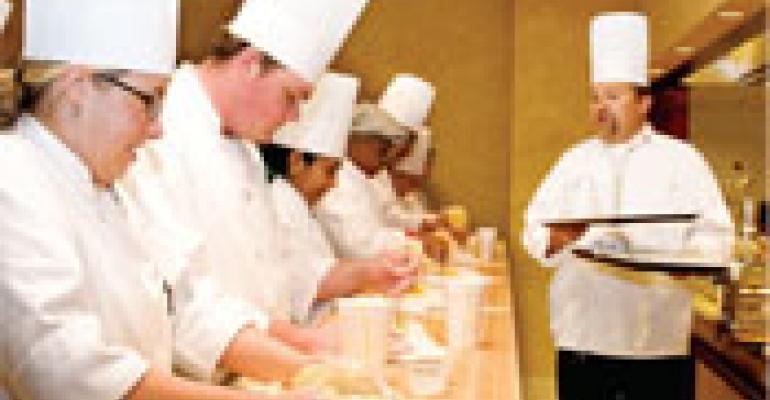 While culinary schools and programs continue to sprout like mushrooms, fertilized by the popularity of celebrity chefs and TV food shows, apprenticeships as a route to a professional culinary career also are gaining new momentum.

Though apprenticeships to reach chef status have long been tradition in European kitchens and Japanese sushi restaurants, they have been growing in demand in the United States for the past 10 years, according to the American Culinary Federation.

The ACF said it has seen a greater interest in its apprentice program, not just from community colleges or post-secondary schools, but also from the food and beverage departments of hotels and resorts.

Nearly 2,000 apprentices are studying in approximately 80 ACF-sponsored programs, including 10 that are run by employers, the St. Augustine, Fla.-based organization of professional chefs said.

Running a two-to-three-year apprenticeship program for employees is a way to improve recruitment and retention and build an experienced team of cooks, say chefs who oversee the educations of dozens of employees every year.

“I have a waiting list of people wanting to get a job here so they can apply for the apprenticeship program,” said Dean Thomas, executive chef at the Barona Valley Ranch Resort & Casino in Lakeside, Calif., near San Diego.

A former chef instructor at the New England Culinary Institute in Montpelier, Vt., Thomas joined Barona Valley in 2004 and was given the charge to improve educational opportunities for employees. Thomas manages a culinary staff of 320 that serves 8,000 to 10,000 meals a day.

As part of staff training and development, the resort added a demonstration kitchen and adjacent private dining room and established its Barona Culinary Institute for employees. The institute includes training for hourly staff and leadership classes for management, but it also has a two-year apprenticeship program limited to about two-dozen employees. The first class will graduate at the end of this month.

The apprentices are full-time employees and their education is fully sponsored by the resort, which pays for books, tests and fees.

Other apprenticeship programs require employees to pay for their tuition, although it is usually much less than the cost of going to a culinary school.

At the Broadmoor, a five-star, five-diamond resort hotel in Colorado Springs, Colo., apprentices are hired full time, but must pay $2,400 tuition for a three-year, 6,000-hour program. When they complete it, they earn a certification from the U.S. Department of Labor and from the ACF.

The 6,000-hour curriculum is longer than those at culinary schools, whose programs may be 12 to 18 months long. But at the end of the Broadmoor’s program, graduating cooks can handle being on the cooking line on a night when there are 200 covers, said Siegfried “Sigi” Eisenberger, who launched the apprenticeships after he came to the Broadmoor as its executive chef in 1992.

The program gets about 60 applicants a year, but usually only takes about 15 students. This year there are 22 apprentices.

“They have to make a commitment to the program,” Eisenberger said. “We tell them in the interview they will be working nights and weekends, coming in early.”

The larger hotels and resorts are able to offer apprentices extensive hands-on experience, from washing dishes and managing pantries to garde manger, butchering and pastry. Instruction is either handled on-site or in conjunction with a local community college, said Mary Zappone, who chairs the ACF’s Foundation Apprenticeship Committee and is a professor in the culinary program at Westmoreland County Community College in Youngwood, Pa., which is 30 miles from Pittsburgh.

“We have a lot of employers who want that apprentice graduate because they know the demands of the industry,” Zappone said. “They’ve experienced it firsthand.”

Although Ashley Kvederis had attended a culinary school in San Diego, she wanted to do an apprenticeship at the Barona Valley Ranch resort. She will complete her training this month.

“I’m getting a lot more hands-on [experience] than when I was in [culinary] school,” she said. “I’m working with a lot of different chefs, and it’s giving me more background and knowledge.”