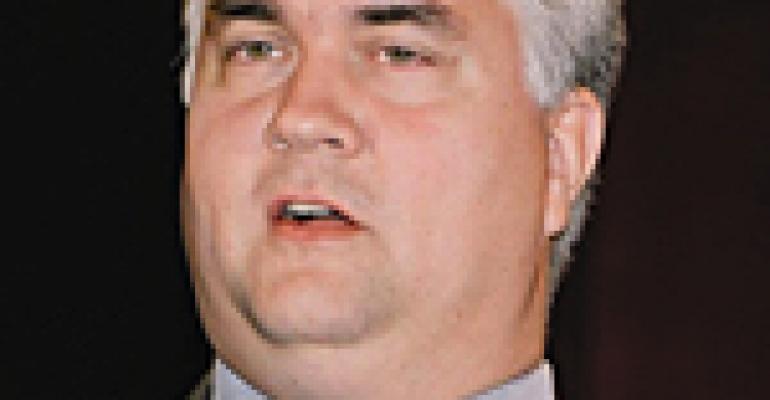 Career: joined MPC in 1996 after serving more than a year as the company's contract systems developer; previously worked as a programmer and in sales and dispute resolution

Reports to: vice president of finance

Improving labor efficiency by using technology to simplify operations is one of the primary missions of Douglas S. Davis, information systems coordinator for Bradley, Ill.-based Monical Pizza Corp., according to Davis.

MPC is the parent of 57-unit Monical's Pizza, a chain offering salads, sandwiches, pastas and pizzas via delivery, take-out and table service.

Davis says his four-person team oversees wiring, programming and repair of computer and telephone equipment in all 30 company restaurants and at 16 of the 27 franchised stores within the system.

The IS department at MPC is part of a minority within foodservice that develops most key business applications in-house and uses Apple technology to boot. It was an early user of touchscreen technology, but has backed away in recent years.

What have been some of your recent, larger information systems projects?

[Introducing] the use of a frame relay for communications, updating to the newest Macintosh computers, implementation of a gift card system (replacing our old certificates), [and] replacing old ink-jet printers with laser [printers].

How about pending projects?

Iam working on time management and scheduling to be done within our POS [system].

In 2007, what is the greatest challenge to Monical's Pizza operators?

One of the biggest challenges we face this year and moving forward is the increase in minimum wage. There is no way we can pass on the cost increase to our guests, so it means fewer people actually doing the work.

How can technology ease or eliminate this problem?

The key for technology is to enable employees to more easily fulfill their job functions. "User Friendly" was the buzzword of the 1980s and '90s, but it is the reality of today.

Can you cite examples of how MPC is making operations tools more user friendly?

[The move to] gift cards. We just switched to them a year ago. [Until then, the paper certificates] were still being processed [manually, with] counting by hand, etc. Now the point-of-sale [system] can track and count them. This cuts down on errors both in double entry and in forgetting to enter them. The cards can't be copied and give you a lot more options including the ability to refill.

How about plans to simplify other aspects of the operation?

We plan this year to move to internal credit card handling via our in-house POS [system]. This will require the addition of swipe units for our keyboards [while eliminating standalone card reader terminals].

Why does your company use Apple computers?

'Cause Windows don't sound edible, and we are a restaurant business! All kidding aside, in the early 1990s the mouse was still rather new and touchscreens were only available on Macs. Windows hadn't taken over for DOS, and to build a system that was easy to administer, we went with the Mac. We still use the same [4D Server] database – though a much newer and faster version – today to drive our point-of-sale [system], as well as numerous databases throughout our corporate support facility.

Do all the franchised and company stores use Apple systems?

Currently all corporate stores and 12 franchise locations use Macintosh computers running our in-house-developed point-of-sale [application]. Another eight franchise stores use a derivative of our POS, which they modified for their own needs and which runs on the Windows operating system. The 4D Server software [used for development purposes] is flexible and can run on any operating system.

Does your POS system feature touchscreens?

It used to feature touchscreens, but we have moved to a mouse and keyboard. Young people have grown up with the iPod, the mouse and [keyboards and] the ability to handle them, so they no longer need touchscreens to remove their fear of computers.

What are some of the challenges you face in your role?

Balancing time is one of the biggest challenges. Everyone has a timeline by which they want things done and finding out what items are priorities is sometimes tough. We may have items that we want to focus on, but [other factors may] squelch opportunity for new development.

Related to new-development roadblocks, can you cite an example?

For instance, Apple OS-X [the last major Apple operating system update] was a major jump and it took us nearly a full year to make it work right. During that time, development of new processes was on hold. Now, I am in full swing, putting in the things I wish I could have done a year ago. These include additional reporting functions and a fully operative gift-card routine. Until now, [restaurant employees] had to ring up gift cards as gift certificates and could only sell them in $5 increments.

Consolidation of functions [at headquarters]. [For example], marketing wants to control the advertising aspect of the external Web site [and] human resources wants to keep tabs on what is being released on the internal Web portal. But the reality is that information systems [personnel] keep those Web servers up and running. Who should be in charge and oversee the individuals doing the day-to-day [work on] these sites is another hot topic up for discussion.