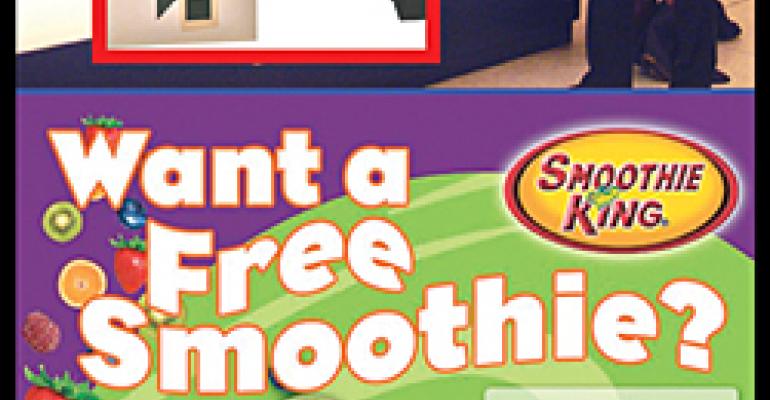 Smoothie King, the Covington, La.-based chain of more than 550 outlets, is among the foodservice brands now leveraging the one-to-one, take-us-with-you link to consumers provided by text-message promotions.

But despite such moves by segment heavyweights, other foodservice operators are weighing alternative mobile-marketing technologies or waiting on the new-media sidelines.

While some chain and independent brands are yet to push the marketing envelope to court mobile-technology-savvy diners, many operators scanning their radar screens for breakthrough methods are seeing such things as cell phone-readable 2-D bar codes and the phone software that decodes them from JPEG snapshots.

Papa John's Pizza of Louisville, Ky., recently began testing that new way to put spending incentives in the hands of consumers on the go by inviting nearly 200,000 to take part.

Also finding their way into the available mobile-marketing repertoire are tools supporting devices with near-field communications, or NFC, chips. Cell phones and PDAs with those chips retrieve information, such as directions to restaurants or coupons, or settle transactions when waved near a special reader terminal or tiny chip embedded in a poster, as customers at some Jack in the Box restaurants recently discovered.

Operators looking for marketing and advertising opportunities on small screens have been trying new technology that pushes content to idle cell phones and their displays. The technology, recently given a six-week whirl by some McDonald's franchisees in the Cleveland area, delivers branding materials along with free popular content, such as weather updates, that consenting consumers receive multiple times daily when their phones are not in use.

Some IT professionals and pundits say higher levels of standardization among mobile-marketing technologies and service providers would help the cause.

"We have dabbled in it, but only at a local or regional level," says David Grooms, vice president of U.S. information technology for Oak Brook, Ill.-based McDonald's Corp. "My position as a technology guy is that [mobile marketing] is still in its early days."

Grooms said the chain's nearly 14,000 U.S. restaurants "haven't settled on a technology that works for us," and indicated that the wait-and-see approach stems from an ongoing process whereby technologies and service providers are "sorting themselves out" and "jockeying for position."

Kim's summary solution is that "U.S. marketers should apply lessons learned from other digital channels to launch effective mobile campaigns."

"Also key," he said, is "targeting the small but influential base of consumers who have already experienced mobile ads."

Leaders of Smoothie King are enthusiastically backing some aspects of mobile-marketing technology today. The chain earlier this year entered into a mobile-marketing support agreement with Fishbowl of Alexandria, Va.

Fishbowl is a permission-based e-mail marketing services firm that boasts a user base of more than 30,000 restaurants. The company recently expanded into mobile channels.

Under the agreement, Smoothie King franchisees receive training and pay a monthly fee to access Fishbowl's Internet-based, text-message-marketing tools. Using Fishbowl's software, accessed via Web browsers, Smoothie King operators manage their list of phone numbers for customers who opted in, create informational snippets or promotional offers of 160 characters or less, and schedule a broadcast of the message to the list or, if desired, subsets, such as students at a nearby high school.

"We now have 20 percent of our system, nationally, using a local text messaging program," said David W. Stidham, director of marketing for Smoothie King Franchises Inc. "I wouldn't be surprised to see 75 percent of the system on this within a year."

Stidham said the software's ease of use means franchisees "can get as creative as they want, with surveys, contests or notes that communicate specials."

"There is a five-times-higher response rate compared to e-mail," he said. "I believe it is the communications [medium] of the future here today."

Smoothie King franchisee Mitch Rizzello, of RC's Healthy Creations of Mansfield, Texas, said he began the "SK Text Club" for his unit in August. By late October, he said, 220 people had taken the bait of a free smoothie and opted in.

Rizzello said 18 percent to 22 percent of the people receiving his text messages take part in the offers, such as "Monday Madness" discounts or "Two-for-Tuesdays." Most offers are limited-time deals to spur consumer action, he indicated, adding that the immediacy of text messaging and high response rate can make the medium a business saver during slow times, such as rainy afternoons.

"Compared to other marketing I've done," Rizzello said, "this is probably the best return [on investment] I've received."

In addition to text message marketing, digital couponing for mobile devices is on the upswing.

Caribou Coffee recently joined a number of other chains, including Wienerschnitzel and Taco Bueno, as well as regional franchisee groups of various brands, in offering coupons for mobile devices redeemable at all 490 of Caribou's locations. The chain is working with Cellfire Inc. of San Jose, Calif., which uses proprietary software to manage coupons on selected models of cell phones and PDAs, while offering mobile coupons to other device users via the CellfireExpress mobile Web page.

Kathy Hollenhorst, who until late last month was Caribou's senior vice president of marketing, said the chain was using Cellfire "to drive store traffic, increase trial of our great coffee and convert new guests into loyal customers." The technology's creators claim it regularly achieves redemption rates of from 5 percent to 15 percent, compared with an average of less than 1 percent for paper.

In a September promotion staged by Papa John's and cellular carrier AT&T, consumers with compatible phones received a direct-mail piece telling them to text "PIZZA" to a number shown. Complying yielded a return text message with a link to download NeoReader software that can decode 2-D bar codes, made by NeoMedia Technologies Inc. of Atlanta.

Participating consumers then used the cameras built into their phones to take a picture of the boxy 2-D bar code on the mail piece distributed by the chain of 2,785 U.S. pizza restaurants. The codes get their "2-D" moniker because they present information vertically, as well as in the horizontal format used by conventional bar codes. Snapping the picture triggered a series of automated steps that directed the shutterbugs' phones to Papa John's mobile-device ordering website, where ultimately the users were rewarded with a free pizza.

"The addition of a 2-D bar code promotion continues our tradition of industry firsts and creates a new way for customers to engage with Papa John's," said Bob Ford, director of online marketing.

Chain restaurants are not alone in testing the appeal of 2-D bar codes, which can quickly convey to mobile-device users relatively large amounts of coded information or effortlessly connect them to websites.

In the San Francisco Bay Area for the past several months, hundreds of restaurants have displayed 2-D bar codes called "EZcodes" by Scanbuy Inc., the New York-based technology service provider supporting the project. Users of camera-equipped mobile devices loaded with the appropriate reader software can point-and-shoot for fast access to reviews and other information about the participating eateries, supplied by online entertainment guide provider Citysearch.

It remains to be seen whether 2-D bar codes will catch on in America as they have in Japan, but to achieve that result NeoMedia has made its NeoReader software available for a number of popular phones sold here. Manufacturer Samsung Electronics Co. Ltd. has begun preloading Scanbuy's ScanLife 2-D bar code reader software on camera phones sold in foreign markets in a deal that could soon see such phones sold in America, Scanbuy said.

In a test earlier this year in the San Francisco area, 230 people were given NFC-chip-equipped Samsung phones with so-called "virtual wallets." The test was conducted by the Bay Area Rapid Transit District, or BART, of San Francisco; electronic payments and commerce specialist First Data Corp. of Greenwood Village, Colo.; and VIVOtech Inc. of Santa Clara, Calif.

The consumers with "virtual wallets" could pay for BART rides and meals at Jack in the Box restaurants by waving the phones near contactless reader terminals. They also could transfer money from their regular BART accounts to the phones and purchase Jack Cash gift card credits and transfer them to the phones — all over the air, or OTA.

Demonstrating the potential service and marketing capabilities supported by the NFC technology provided for the test by VIVOtech, participants were able to use so-called "smart" posters with embedded chips. When participants placed their phones near designated points on the posters, the NFC chips and software in their phones initiated wireless requests for directions to the nearest Jack in the Box. The directions were returned to the phone OTA from remote computer servers.

Astatement about test results by organizers said that "during the [four-month] trial, participants tapped their phones several hundred times on smart posters."

Jack in the Box declined to divulge more specifics about smart-poster usage or detail the number of purchases or average tickets during the trial. Kathleen Anthony, a spokeswoman for San Diego-based Jack in the Box Inc., operator or franchisor of more than 2,100 namesake quick-service restaurants, said the company's IT department played only a small role in the BART phone test but was "happy" with the results.

"If the [NFC chip] technology advances and becomes readily available, we're in a position to accept those transactions, as we have contactless readers in all of our company restaurants and 95 percent of the franchised locations," Anthony said.

Mobile Posse's technology is intended to connect businesses with the majority of mobile callers who do not have Internet data service plans. It requires consumers to install proprietary software on their phones. That software manages the in-phone storage and display of pushed content, including ads, redeemable promotional offers and the free information specifically sought by consumers who opted in, such as sports scores.

McDonald's officials did not disclose results of the chain's new-tech promotion of Dollar Value Meal deals at breakfast, lunch and snack time. But Danya Proud, McDonald's Corp.'s senior manager of U.S. media relations, commented on the chain's motivation for such trials.

"We realize we have to be more creative in how we reach our customers," she said. "We know that today's customers, particularly young adults, like to discover brands, and what brands have to offer, for themselves."

Proud added: "We are looking at how we can reach these customers where they live, work and play. Messages on their cell phones, PDAs, BlackBerries and other handheld devices that they carry with them all day [are] something we are exploring."