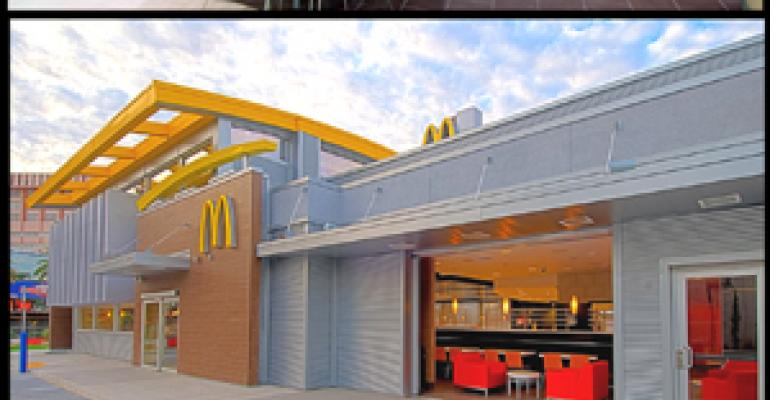 Inside, a 12-screen “media ring” and three other flat-screen displays share with the outdoor displays video content from the new McDonald’s Channel, as well as retail product clips. Among other things, the McDonald’s Channel features three- to five-minute vignettes of audience-appropriate content from partnering educational programming sources, including cable TV’s The Discovery Channel and Animal Planet.

Oak Brook, Ill.-based McDonald’s Corp. is the parent of the McDonald’s quick-service sandwich chain, with about 13,700 U.S. and 16,000 overseas locations. Its new 184-seat Las Vegas restaurant offers wireless Internet access for customers and its sound system can deliver different content to different zones within the space, according to Brian Unger, senior vice president of McDonald’s Western division.

Viva McDonald’s is next to the Circus Circus hotel and casino and replaces a nearby 25-year-old unit, which closed just hours before the new location went live. Unger said McDonald’s worked with neighbor Boyd Gaming Corp. to relocate the new restaurant compared to the original unit so that Boyd could better execute its Echelon Place project.

Citing the difficult economic climate and strained capital markets, Boyd Gaming earlier this year said it would delay construction of Echelon, which is designed to include 5,000 lodging rooms and suites along with retail and entertainment facilities.

The Eastern U.S. division for McDonald’s has the 6-year-old, 1,000-seat Smithsonian National Air and Space Museum McDonald’s and the chain’s central territory, the 3-year-old, 300-seat 50th Anniversary McDonald’s in downtown Chicago that replaced the popular Rock ’n’ Roll McDonald’s. “We designed Viva McDonald’s to be the showcase of the Western division,” Unger explained.

Unger said the restaurant is intended to tap into the high-level of consumer traffic in Las Vegas and demonstrate his company’s ongoing 25-year commitment to the city and its visitors. While it features some firsts, such as the McDonald’s Channel component, its overall look and feel is reminiscent of the chain’s current “forever young arcade” design concept, “blown out to Las Vegas size,” he said.

The restaurant’s name was inspired, in part, by “Viva Las Vegas,” the movie staring the late “King” of rock, Elvis Presley, who also garnered a pop hit by that title from the soundtrack.

Among employee amenities at the new restaurant is a “McDonald’s Connect” digital education and training system station. Unger said the bilingual system is the “wave of the future” and pointed out that, among other things, training content can be downloaded, eliminating the need for mailing documents or distributing CDs.

The restaurant also is using the chain’s latest Windows-based, touchscreen point-of-sale system with a user interface incorporating “pictures instead of script,” Unger noted.

Viva McDonald’s is open 24 hours and, at 8,600 square feet, is the brand’s largest restaurant in Nevada. It uses five counter registers, versus the standard three, and has two all-electric kitchens using low-oil volume fryers for reduced operating costs and three-platen grills. Unger said having two kitchens lets the Las Vegas unit serve breakfast until 11 a.m. without hindering preparations for the lunch rush.

“Being all electric allows us to introduce low-oil volume fryers and three-platen grills, which give us 50 percent more [cooking] capacity while being energy efficient,” he said.

The restaurant also uses a reverse osmosis system to purify water for all beverages.

Viva McDonald’s offers the McCafe line of espresso and iced coffee drinks. To meet the demand for those upscale drinks and other future McCafe offerings, such as smoothies, the Las Vegas restaurant has an employee called a “beverage specialist,” Unger said. That employee serves the counter and the drive-thru.

The beverage specialist manages McCafe drink orders using a POS system display monitor with a bump bar. Order information is printed to so-called “sticky” slips and pressed onto each drink so that customers can tell what their beverages contain without the need for the employee to write on cups.

Among the unique retail products being sold at the restaurant: yard-long, 42-ounce cups.

Unger declined to discuss development costs. He reported that the restaurant “was doing extremely well [in sales] out of the gate.”

McDonald’s officials said the McDonald’s Channel was developed by ChannelPort Communications and incorporates content from providers such as Discovery Communications and technology from Harris Corp. The assorted software, equipment and services provided by Harris, including the InfoCaster digital signage platform, is being used to manage and control the acquisition, preparation, scheduling and display of the McDonald’s Channel in the Las Vegas restaurant, they said.