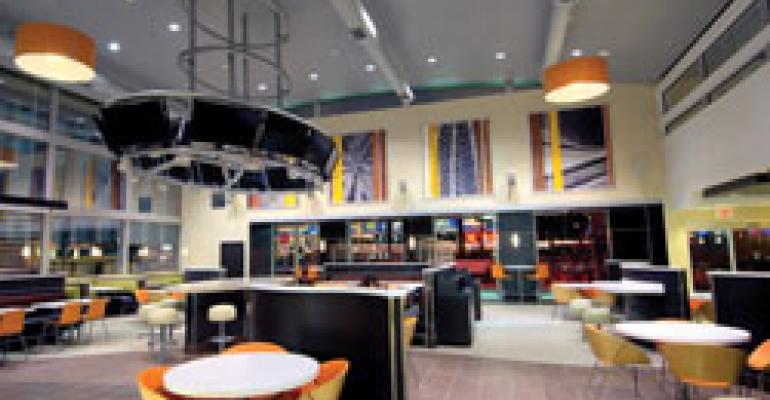 Consumers entering from Las Vegas Boulevard will be greeted by an oversized, neon-lit marquee with video playback capabilities and four jumbo display screens on the exterior of the entrance. Inside, a chain official said, is a 12-screen “media ring” and three other flat-panel displays sharing educational television content and retail product clips. Employees have access to the “McDonald’s Connect” digital education and training system, she added.

The restaurant owned by McDonald’s Corp. of Oak Brook, Ill., is next to the Circus Circus hotel and casino and replaces an adjacent 25-year-old unit, which will be closed just hours before the new location goes live on Thursday. Las Vegas Mayor Oscar Goodman and McDonald’s mascot Ronald McDonald will be among the dignitaries taking part in opening activities at the restaurant with a name inspired, in part, by “Viva Las Vegas,” the movie starring the late Elvis Presley, who also garnered a pop hit by that title from the soundtrack.

The McDonald's spokeswoman said the new restaurant will be open 24 hours and is the brand’s largest in Nevada at 8,600 square feet. She said the restaurant uses five counter registers, versus the standard three, has two kitchens and uses three-platen grills.

On the equipment front, the representative said, Viva McDonald’s uses a reverse osmosis system to purify water for all beverages; features an all-electric kitchen; and incorporates a Euro-style “bagging station” for fresher, hotter fries.

Among the distinctive products planned for the new restaurant: 42-ounce soft drinks sold in yard-long cups.

McDonald’s Corp. officials were not available at press time for comment on development costs.