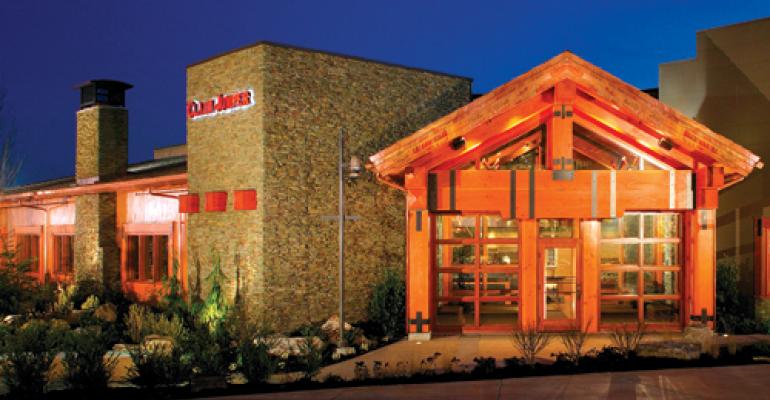 Landry’s Restaurants Inc. has asked the bankruptcy court in the Claim Jumper reorganization to stop the chain's plans to sell its assets to an investor, arguing that it has a better offer.

Also filing an objection in the casual-dining chain’s Chapter 11 reorganization was Claim Jumper founder Craig Nickoloff, a shareholder and previously spurned bidder for the chain, who said he is concerned about the lack of transparency in the sale agreement announced earlier this month.

The objections come a few weeks after Irvine, Calif.-based Claim Jumper Restaurants filed for Chapter 11 reorganization and said it planned to sell most of its assets to an affiliate of investment firm Canyon Capital Advisors LLC.

The proposed buyer is named as Private Capital Partners, a current investor, who pledged to keep the chain’s 45 restaurants open during the transition.

When it announced its reorganization Sept. 10, Claim Jumper said it would it would consider competing offers from other bidders and retained Piper Jaffray & Co. as a financial adviser.

Anita-Marie Laurie of Sitrick and Co., serving as a spokeswoman for the Claim Jumper restructuring process, said Monday that the chain’s management had not yet been contacted by Landry’s but that they “are looking forward to gaining further understanding of their interest.”

A court hearing is scheduled for Wednesday during which the objections to the Claim Jumper sale are expected to be addressed.

Landry’s Restaurants Inc. — which is in the midst of a going-private deal with its founder, chairman, chief executive and president, Tilman J. Fertitta — is the operator of about 174 restaurants including the Rainforest Café, Saltgrass Steak House and Landry’s Seafood House chains. The company also owns two Golden Nugget Hotels and Casinos in Nevada. In April, Landry’s Restaurants bought the Oceanaire Seafood Room chain out of bankruptcy.

According to the court filing by Landry’s, the current sale agreement by Private Capital Partners totals $52.8 million, which includes a cash price of $24.5 million and the assumption of certain liabilities.

Landry’s contends that its offer is better: $55.3 million, including a cash purchase price of $27 million, and the elimination of a potential $1 million administrative liability to the current bidder.

Noting its earnings before interest, taxes, depreciation and amoritization of $207.9 million in 2009 and $162.9 million in 2008, Landry’s said in the court filing that it “has the wherewithal to acquire and successfully operate the debtors’ restaurants.”

“The value of any release of causes of action against Black Canyon, one of the debtors’ most significant pre-petition creditors, remains undisclosed by the debtors, unknown to the court and other parties in interest, and untested by any party, including the official committee of unsecured creditors,” Landry’s said in the filing

The filing asks the court to deny the bid by Private Capital Partners and to designate Landry’s Restaurants as the stalking horse bidder.

Landry’s filing raises questions about the existing sale agreement, arguing that “heightened scrutiny” is necessary in light of the Claim Jumper’s relationship with Black Canyon as a debt holder.

Nickoloff also raised questions about the integrity of the process, given Black Canyon’s relationship with Claim Jumper prior to the sale.

In a separate objection also filed Friday, Nickoloff said he has made two bids for the chain since 2009, but the company twice selected bids by Black Canyon. Previous negotiations with Black Canyon did not result in a sale.

Nickoloff asked the court to allow more time for the bid procedures to allow the company to provide more information about the relationship, if any, between company officers, board members and Black Canyon and its affiliates.

Claim Jumper's chief financial officer, William Taves, said in court filings that the casual-dining chain was hit hard by the economic downturn at a time when the company had deepened its debt with rapid expansion, adding 13 locations between 2006 and 2008.

Taves blamed the challenging economic climate in California, in particular, where most Claim Jumper restaurants are located. Same-store sales for the chain have declined every year since 2006, down 14.2 percent in 2009 alone.

Taves said the debtor were hoping for a quick sale so that the buyer could benefit from the upcoming holiday season. Delays would likely depress the final purchase price, the filing said.