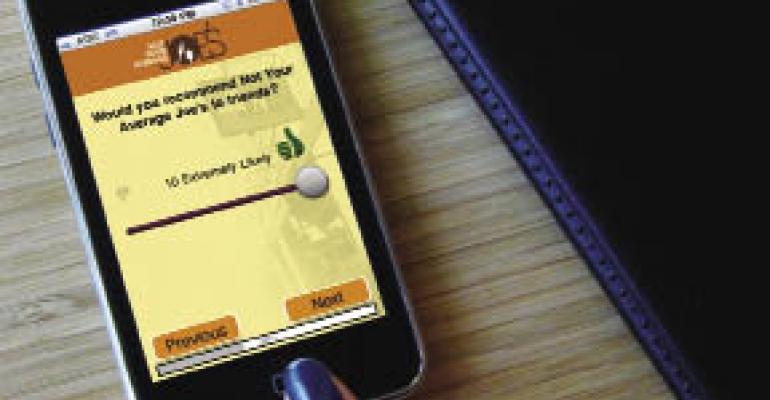 Some people may find it rude to see restaurant customers’ heads buried in their smart phones or MP3 players as everyone finishes a meal. But Not Your Average Joe’s chief executive Steve Silverstein loves when that happens.

In each of his 15-unit chain’s casual-dining restaurants, guests are given the opportunity to complete a mobile survey on an iPod touch, and the convenience and cool factor get hundreds of people to fill out the questionnaire — without any costly incentive.

Mobile-survey applications, which allow customers to use their Web-enabled phones to file kudos or complaints that go straight to an owner or manager, are an increasingly popular method of customer relationship management.

In addition to their ease of use for smart-phone-savvy guests, such systems deliver feedback on operations and marketing strategies faster than traditional comment cards. They also collect and analyze data, offering operators quick insight into consumer satisfaction, and a chance to respond before a dissatisfied customer leaves the premises and has the opportunity to speak negatively of the experience in person or through social media.

Middleboro, Mass.-based Not Your Average Joe’s began testing its mobile-survey application, Survey on the Spot, in one unit about nine months ago. The chain rolled the program out systemwide in January. In a recent seven-day run, the brand received more than 4,200 surveys and — as an additional benefit — more than 1,100 respondents joined the restaurant’s e-mail loyalty club.

Silverstein said he partnered with the mobile-survey purveyor because he wanted a more robust report than one mystery shopper’s observation for one meal could offer. He said he remains “stunned” by the number of surveys coming in, nearly 300 per week per restaurant.

“About a third of them are joining our e-mail club, which is our only way of talking to people directly,” he said. “Because they’re joining electronically, it’s instant. They get their welcome gift — 20 percent off your party’s next visit — immediately, and we get redemptions immediately.”

That immediacy motivates servers and managers, too. While he couldn’t tie the use of the mobile-survey application to a specific increase in sales, Silverstein does attribute a heightened awareness in the stores to the system.

“The servers know the feedback is instantaneous,” he said. “It’s on an iPod touch, and because it’s cool, guests’ participation is high; every table is a possible grade.”

One of Silverstein’s favorite features of the mobile-survey system is that customers don’t need a coupon or other incentive to fill out the questionnaire.

And comparing the mobile-survey system’s cost to that of Not Your Average Joe’s former method of mystery shopper visits, the company is saving a lot of money. Silverstein said it cost about $125 per month to conduct one mystery shopper survey in one restaurant, compared with a $60 monthly fee per location to run as many mobile surveys as the restaurants can get.

In the past, postage-paid comment cards may have compiled a few data points from thousands of customers in a year, but somebody had to enter all that data manually — while Silverstein said the new system collects, enters and analyzes the numbers in a fraction of the time.

“The way I look at it, it’s the evolution of the mystery shop,” he said. “We’re taking that from a manual process to a much richer, deeper set of data.”

Ninety Nine Restaurants, a 107-unit casual-dining chain based in Woburn, Mass., and owned by O’Charley’s Inc., uses Survey on the Spot’s mobile-survey application to expedite the collection of information regarding the testing of new menu items, said vice president of marketing Brad Schiff. Ninety Nine has been able to cut down on costs associated with research and development by using the iPod touch to compile surveys from the culinary team about internal menu tests or from guests during focus groups.

“We’ve been able to save money, but the real key is getting better information and getting it quicker than ever before,” Schiff said. “Saving money is just a side benefit.”

“There’s no need for hand tabulation, which can get lengthy,” he said. “There’s no trying to read people’s handwriting, and comments made in the verbatims get tabulated into a word cloud, so we know what stands out.”

Two California restaurants, Valen Dolcé cafe in Santa Monica and 5A5 Steak Lounge in San Francisco, are testing a new mobile-survey application called Skweal, said the system’s founder, Tyler Crowley. That application sends customer complaints directly to an analytics dashboard controlled by the restaurant’s owner or manager, allowing the guests’ voices to be heard without angry tweets or online reviews.

Immediacy really is one of the key benefits of mobile-survey applications, allowing guests to give feedback on their own phones or those provided by the restaurant while they are still on-site and their experience is vivid, according to Ken Kimmel, president of Survey on the Spot and a former chief marketing officer at Dunkin’ Donuts in Canton, Mass.

“When I was … at Dunkin’ Donuts, I thought if I could get a picture of the doughnut case at 3:30, I would know everything I needed to know [about what was selling],” Kimmel said. “If you can complete a survey in the restaurant, it allows the opportunity to get [that same] great information. People are more likely to take them, as opposed to remembering their receipts and going to a website later.”

“With younger guests, comment cards are a thing of the past,” he said. “This service tracks younger, especially for the guest segments for whom smart phones are just a normal way of life.”