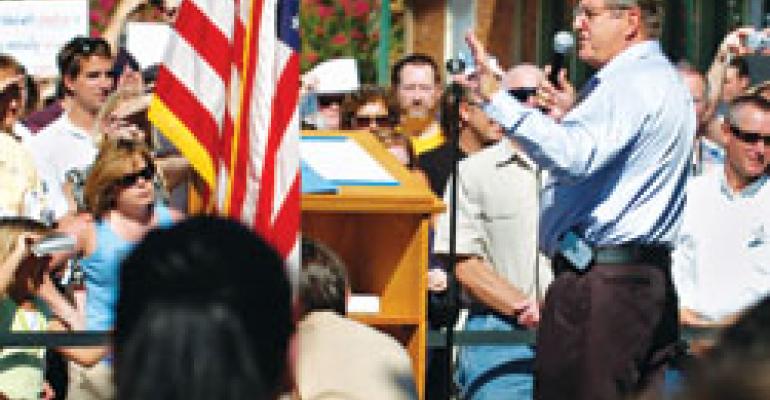 Ken Willis says the town hall meeting he attended in Denton, Texas, was not marked by the rancor and deep division that has dominated some other recent gatherings across the nation. But that doesn’t mean participants did not harbor fears about the impact national health care reform might have on their businesses.

Willis took the opportunity to address his congressman, Rep. Michael Burgess, R-Lewisville, and other business professionals when he was invited to participate in a panel discussion at the meeting earlier this month.

“I voiced concerns about the effect health care reform might have on our margins,” said Willis, owner of Ruby’s Diner on the Square and two Beth Marie’s Old Fashioned Ice Cream and Soda Fountains in Denton. “Most restaurants are run on very slim profit margins these days, and the costs [associated with mandated health care] could definitely hurt us.”

Willis, like many other operators, acknowledges there are serious problems with this country’s existing health care system, not the least of which are the ever-escalating costs. But they also worry that the potential costs associated with overhauling the system could critically damage their businesses, which already are buffeted by the recession.

In particular, some operators are troubled that the program’s 10-year, $900-billion price tag could be financed in part by the business community through mandated coverage fees and new taxes.

“There’s not a restaurateur out there who doesn’t believe that everybody should have the right to health care,” said Harry Rose, chief executive of The Rose Group, a Newton, Pa.-based company that franchises 59 Applebee’s and four Corner Bakery Cafes. “The question is: How is it going to be funded? Washington wants a mandatory program as opposed to reducing the cost of health care and making it more affordable. I’m opposed to mandatory health care.”

“We can certainly see the need for health care reform,” said Beth Johnson, executive vice president of public affairs for the National Restaurant Association. “But what is troubling are the costs and how they’re managed. The big question is how do you expand coverage but contain costs.”

Matthew Shay, president and chief executive of the International Franchise Association, said, “Now is not the time to add financial burdens to small businesses when they continue to struggle with an economy in recession and cost pressures that produce narrow profitability.”

Johnson also expressed unease that lawmakers might not fully comprehend the intricacies of the foodservice industry, particularly its reliance on part-time workers and other employees who already might have health care coverage elsewhere.

Willis agreed, saying that he employs a number of workers who hold two full-time jobs. “So do both employers have to pay?” he wondered.

To be sure, no dominant bill has yet emerged on Capitol Hill, where there are six different drafts at present in the House and Senate, and the final shape health care reform takes remains uncertain. Nevertheless, certain elements appear likely to be included in some finished version, experts say.

For instance, “pay-or-play” mandates—which require that employers either subsidize workers’ health benefits or pay a tax or fee to the federal government to help finance a fund for the uninsured—have shown up in several bills. According to CBS’s , these mandates could raise up to $163 billion over 10 years.

One House bill, “America’s Affordable Health Choices Act,” or H.R. 3200, has drawn fire from several associations already. The bill states that businesses must pay for 72.5 percent of individual coverage and 65 percent of family coverage, or else pay a percentage of their payroll tax to the government to help fund benefits for the uninsured. The tax is calculated on annual sales, ranging from 0 percent for companies making less than $250,000 to a high of 8 percent for businesses making $400,001 or more.

Neil Trautwein, vice president of the National Retail Federation called the bill “a very punitive approach and potentially could be a great deterrent to hiring.”

Trautwein noted that the Senate’s Health, Education, Labor and Pensions committee bill takes a similar tack. Under the HELP bill, employers must provide coverage and pay 60 percent of the cost for full- and part-time employees. Those businesses that don’t provide for employee health care benefits would be required to pay a tax of up to $750 per full-time employee and $375 for a part-time employee. Operators with 25 or fewer workers would be exempt.

Trautwein also criticized the “tyranny of those exemptions.”

“You may escape [paying] today,” he said, “but don’t even think about growing your business, because you may get penalized tomorrow. The fundamental problem with bills in the House and Senate is that they will increase costs and make it more difficult to maintain the level of the workforce, which is quite the opposite of what we asked for.”

In place of mandated employee health care benefits, Rose said, he favors creating some form of multistate insurance pools that would allow employees to get coverage at a reasonable cost.

Peter Christie, president and chief executive of the Massachusetts Restaurant Association, said his state’s mandated health care program—which contains a pay-or-play provision—has successfully insured everyone in Massachusetts. Nevertheless, it has ended up costing more than was earlier projected and has not contributed to a decrease in health care costs.

“Nothing has been done to contain costs on the provider side,” he said. “Insurance has still gone up double-digit, and as costs rise, the government turns to small business for the funding to make it work.”

Daniel Halpern, president and chief executive of Atlanta-based Jackmont Hospitality Inc., which operates 10 T.G.I. Friday’s outlets, also is against mandated health care. However, he said he would like to see the industry move the conversation away from its opposition to mandated health care and toward being in favor of more affordable solutions.

“I want to be able to insure more of my people and not incur more cost,” he said. “The problem is there are no products out there that seem to be focused on labor-intensive business models. We need as an industry to engage in public discussion…about how we can create affordable health care and not run ourselves out of business. But we should be for something, not just against it.”

Pay-or-play mandates are not the only aspects of proposed health care reform that worry foodservice operators. In the government’s quest to find sources of funding for the reform measure, many fear it will impose or raise “sin” taxes.

“There have been a number of studies tying obesity to the health care crisis,” said John Gay, a Washington, D.C.-based consultant who previously headed government affairs for the NRA and the IFA. “The more the government is paying for health care, the more it will feel it has a fiscal obligation to taxpayers to make people healthier.”

In addition to raising money to fund health care, the rationale for such taxes would be that people would change their consumption habits if they became too expensive. The Senate Finance Committee currently is mulling taxes on sweetened drinks and certain alcoholic beverages that could raise an estimated $113 billion over 10 years, according to CBS’ .

At the same time, Gay poses a scenario where fast food is taxed.

“It’s not that far-fetched,” he said.

Nor, he continued, would be taking the current business meal deduction from 50 percent down to zero.

“If the government is rooting around for money, it might look at that,” he said. “The industry is going to have to be very watchful.”— [email protected]