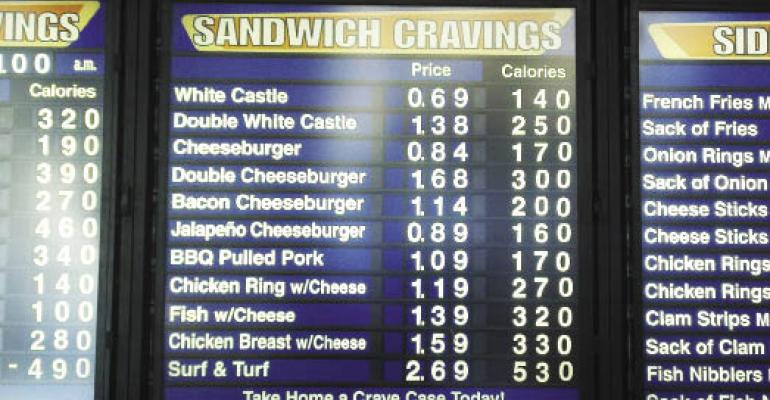 As the deadline approaches for the U.S. Food and Drug Administration to issue its proposed menu-labeling regulations, restaurant operators and trade associations are urging regulators to weigh the complexities of the industry before finalizing the rules.

The FDA is expected to publish the proposed regulations no later than March 23, one year after President Barack Obama signed the provision, Section 4205, into law as part of the sweeping Patient Protection and Affordable Care Act of 2010.

And while the industry generally supports passage of federal menu-labeling standards that would preempt a patchwork of state and local laws, members also have voiced concern that a “one size fits all” approach could be unworkable, given the wide  diversity of the foodservice business.

“This issue sounds very simple on the face of it, but when you start thinking about it, it becomes extremely complicated,” said Scott Vinson, vice president of the National Council of Chain Restaurants, whose members had initially opposed the initiative because it targeted chains with 20 or more units, while excluding smaller operations. “How do you label items that have different methods of preparation or variations? One pizza company, for example, said there are millions of different ways to order a pizza.

“Do you offer a range of calories?” he continued. “If so, what is that range? Can it be as high as 2,000 calories? Is that useful to the consumer, and does it meet the intent of the law to provide consumers with actionable information? We don’t think so.”

Jason Straczewski, senior  director of government relations for the International Franchise Association, agreed, saying, “We need some flexibility. We want [the FDA] to take into consideration the vast differences between restaurants out there.”

While FDA officials prepare to issue rules later this month, industry members and stakeholders will have time to respond  afterward.

“[On] March 23 everyone will see the proposed rules, then there will be a normal comment period for three to six months,” said Scott DeFife, executive vice president of policy and government affairs for the National Restaurant Association. “Then [the FDA] will try to wrap things up by the end of the year, with enforcement expected to start sometime in the summer of 2012.”

Some in the industry are pushing for a longer period before the enforcement phase kicks in. Vinson said when Washington passed the menu-labeling law for the packaged-foods industry in the 1990s, companies were given 17 months to implement it.

“We’re going to ask for a year,” he said. “It would be best if the implementation window were long enough so it would naturally fall within menu and menu board lifecycles.”

For the most part, association officials are not anticipating any major surprises when the regulations are released.

“There’s been a decent dialogue with the FDA,” DeFife said. “They’ve been engaging us as a part of the rulemaking and information-gathering process. And while a lot of pieces haven’t been figured out yet, they have an idea where they want to go.”

The FDA did take the industry by surprise late last summer, however, when it published a preliminary draft guidance on menu labeling that critics said would have established a piecemeal approach to the law that not only would have been confusing to operators and customers alike, but also would have run up the cost of implementation.

“Normally guidance isn’t binding, but in this circumstance it would have been,” Vinson said. “And effectively it would have required chains to label twice under possibly two different sets of standards within two years. Restaurateurs were up in arms. The estimated cost would have been well over $100 million just for chain restaurants.”

The FDA, however, withdrew the guidelines in January after meeting with concerned stakeholders, opting instead to complete a notice and rulemaking process.

Meanwhile, as the FDA approaches its deadline many chain operators with 20 or more outlets nationwide already have been taking steps in advance of the anticipated rules. Ed Frechette, senior vice president of marketing for Boston-based ABP Corp., said the fast-casual Au Bon Pain chain has posted calorie counts at all 250 company and franchised restaurants nationwide — conforming to the standards established in New York City, which are expected to be similar to the as-yet unreleased federal rules. Frechette said the implementation at ABP was “a pretty big undertaking,” even though the chain already had all nutrition data available at its kiosks. Calorie counts are posted in the same font and size as the price.

Customer feedback has been largely positive, he said, noting the addition of calorie counts has not prompted a dramatic change in customers’ ordering habits.

“We saw that people didn’t shift from one category to another — from sandwich to soup, for example,” he said. “What we saw was a shift within categories [toward more healthful selections]. Maybe someone is going to order a turkey club with bacon but  instead trades down on calories.”

He also said there has been no change in the check average.

At the 400-plus-unit White Castle Management Co. based in Columbus, Ohio, calorie counts have been posted at 41 locations — including New York City — on menu boards located both inside and at the drive-thru windows, according to Jamie Richardson, vice president of government and shareholder relations.

Richardson said the interior menu boards did not present as much of a challenge as the drive-thru boards.

“Space constraints at the drive-thru are a bigger problem,” he said.

White Castle employs two adjacent menu boards at the drive-thru. And while Richardson declined to divulge costs, he said: “It can be an investment. It’s not just putting up a new transparency; you have to create the hardware to house it.”

Although some operators have worried about slowing down the service line, he said the new calorie-enhanced menu boards have not reduced the pace of traffic at the counter or in the drive-thru lanes. Meanwhile, he said White Castle is “prepared to put the [menu-labeling] plan into motion as soon as we get a degree of certainty as to what will be required.”

The 300-unit Bruegger’s Bagels chain posted calorie counts in markets where menu labeling is required — like New York City and California — and has it in test in other markets, like its home base of Burlington, Vt., and upstate New York. Jim Greco, chief executive of Bruegger’s  Enterprises Inc., said the brand hasn’t found it difficult to add the information to the menu boards in a way that is readable and not cluttered. “We’re happy with the way it looks,” he noted.

Greco said the process is not particularly expensive for Bruegger’s, which presents its menu on banners hung from rods above the counter.

“It’s a little more work in terms of layout, but not particularly complicated,” he said.

But even with the calories posted, Greco said he doesn’t believe the majority of Bruegger’s customers have changed their ordering habits.

“Some don’t even notice it,” he said.