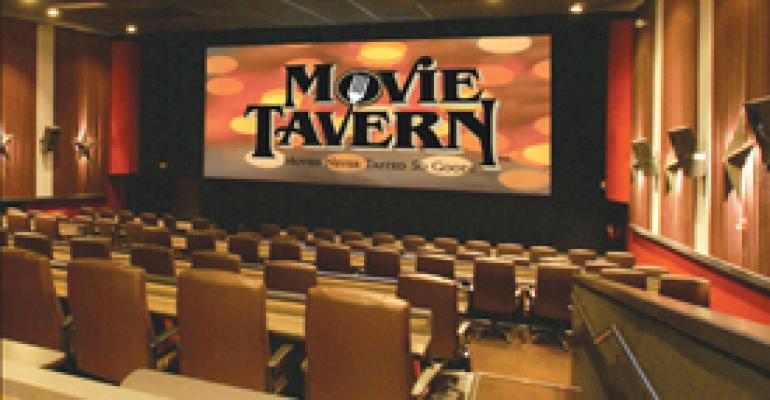 While recruiting more chain restaurant executives into their operations, high-profile cineplexes are taking a larger slice of the dinner-and-a-movie entertainment dollar by offering first-run films and casual-dining amenities that include in-seat meal service.

Several new cinema-eatery openings in the past year, and plans for more to come, signify what could be a sizable shift in diners’ habits for spending entertainment dollars on first-run movies accompanied by everything from burgers and pizzas to steaks and cocktails.

“We think it’s the future of the movie business,” said Jeffrey P. Benson, president and chief executive of the nine-unit Movie Tavern Partners LP, based in Dallas. “For as long as there have been movies, people have talked about dinner and a movie.” But until now, he pointed out, “you’ve never been able to do it in one place.”

Movie Tavern, which opened its first dine-in theater complex in November 2001 in Fort Worth, Texas, plans to nearly double the chain’s size next year by opening eight more locations, followed by a dozen more in 2009, Benson said. The opening of Movie Tavern’s Denver cineplex in mid-June gave the company a total of 80 screens in nine units.

Cobb Theatres of Birmingham, Ala., and Taubman Centers Inc. have partnered to create the theater chain’s first “boutique” dining-theater venue, at the Dolphin Mall in Miami. Scheduled to open next spring, the 20,000-square-foot cineplex will have five digital screens and offer assigned luxury seating as well as a tapas-style in-theater menu, with wine and cocktails, for dining before or after screenings. Each of the five theaters will have 75 to 125 seats instead of the typical 200 to 300, and will be restricted to patrons over age 21. The leather seats, each with a handmade wood table-armrest that folds up for “sofa-like” comfort, are to be arranged stadium style but will offer six feet between rows rather than the traditional 48 inches.

The new development, near Cobb’s existing 19-screen cineplex in the mall, also will have its own restaurant with a 30-seat patio.

National Amusements Inc. of Dedham, Mass., which has more than 1,500 movie screens worldwide, has been recruiting for a vice president of food and beverage for its Cinema de Lux locations, which include VIP seating and expanded foodservice, including the attached Chatters Bar & Grill restaurant concept.

While a scattered number of theaters have offered few-frills meal service in the past, the newer versions of cinema-eateries provide broader menus and enhanced service.

Brian Schultz, founder, co-owner and president of Studio Movie Grill, which has four units in the Dallas area and one in Houston, said food quality has improved at such theaters.

“In the past it was frozen food, draft beer and chips,” Schultz said. “It was low-end, low-quality. Now we’ll serve 1,500 made-to-order fresh meals in a one-and-a-half-hour period.”

The Movie Tavern chain has as its director of operations Chris Gainey, who formerly worked with Brinker International’s Romano’s Macaroni Grill concept.

Several factors have led to the recent boom in cinema-eateries.

“In the late ’90s, movie studios started going with these ultrawide releases,” Benson explained. “From a studio perspective, it’s about selling tickets and putting butts in seats. That’s how they make their money. A cinema grill has about half the seats of a typical movie theater, so we were not that popular with the studios.”

But with movie fans’ growing appetite for theater-restaurant hybrids, such operations are getting first-run movies, which has spurred the market for more such developments.

Shopping-center developers are seeking the cinema-eateries because of their older audience demographic and the theaters’ ability to fit into smaller spaces with fewer seats per square foot, which affects the amount of parking slots needed in such developments.

“A lot of these lifestyle centers are redevelopments, and they don’t have the parking spaces,” Benson said. “They want the entertainment component that a Movie Tavern brings, but they don’t want all the parking that a traditional movie theater requires.”

“It has intricacies well beyond a regular theater,” Benson said. “You are serving 1,000 to 1,500 in the dark. Everybody shows up at once. Theater chains don’t know how to run restaurants. They recognize the fact that they are good at serving popcorn and soda pop, but [not] at serving food.”

On top of those hurdles, there’s the challenge of “serving alcohol in a dark theater and that liability,” he added.

Nearly all Movie Tavern locations offer full beer, wine and liquor menus, and their percentage of alcohol sales range from 10 percent to 20 percent of total foodservice revenue, Benson said, noting that the average is nearly 15 percent.

Technology and service systems have been honed over the past three years, including three-minute turnaround on responding to patrons’ service calls.

“I have a call button between every two chairs in the theater,” Benson said. “Anyone can hit the call button and take care of problems and orders. It’s like paging a flight attendant on an airplane. The technology is helping us to be able to service all these patrons in the dark on a Friday night.”

Servers place all orders through hand-held devices that include credit card swipers.

“It’s very much a casual-dining-type menu,” Benson said. “There are 63 items plus desserts, including steaks, pasta, egg rolls and pizzas. It’s a very much a down-the middle, casual-dining menu.”

Top sellers are chicken fingers, burgers and pizzas, he said.

However, “your labor costs are extremely high,” Benson added, explaining that conventional snack bars in theaters typically have per-transaction labor costs of only 75 cents.

Though he declined to divulge labor percentage costs for cinema-eateries, they presumably would be higher than those of standard restaurants.

“You do make it up on the food side,” Benson said, indicating that Movie Taverns’ meal tabs generally run about $10 to $15 per person.

Customers wanting to save time are driving much of the popularity of the cinema-eateries, he explained.

“‘Pirates of the Caribbean’ is two hours and 45 minutes long,” Benson said. “If you wait at a restaurant, eat and then race to a theater, you could easily spend six hours.”