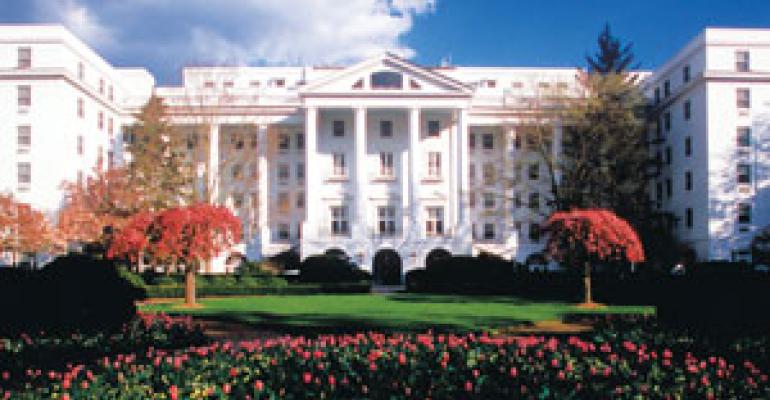 The federal government took steps to ensure The Greenbrier would survive a nuclear attack, but inertia almost proved a more lethal threat to the 232-year-old resort and its restaurant, The Main Dining Room.

“Our new owner likened it to a glider that’d been losing a few feet of altitude each year,” said vice president of food and beverage Casey Lavin, half of the young foodservice duo that was brought in last summer by a local entrepreneur to reset the resort’s clock. “Before you realize you have to do something, you could be crashing to the ground.”

Lavin and The Greenbrier’s new executive chef, 34-year-old Rich Rosendale, could all but hear the fuselage scraping as they arrived. The Greenbrier had been the height of American elegance while they were making names for themselves in fine dining, a place where women in pearls and designer dresses might extend a white-gloved hand to be kissed beneath glittering chandeliers.

The resort was as old as the nation itself, first drawing health seekers in 1778, when George Washington might’ve taken a treatment at the property’s sulfur springs if he weren’t leading the Continental Army. Indeed, he would vacation there as president.

Trouble was, the property felt as old to some present-day travelers as George’s tri-cornered hat. Generations that might have come to The Greenbrier every year with parents and grandparents now wanted sushi or a pizza, not a refresher on how Escoffier had cooked. Seared scallops or braised short ribs are hard to perfect during a dinner service for 800 or 1,000 people, as the Dining Room routinely seated. And that’s after serving a similar-sized crowd at breakfast.

With a freefall in room rentals and group business, the resort struggled to offset losses estimated at more than $30 million a year.

The Greenbrier’s owner, the railroad conglomerate CSX, sought bankruptcy protection for the property in March 2009. Marriott International inked a deal with CSX to buy the hotel and its foodservice operations, eager to take on such a prize.

But that didn’t sit well with a local businessman who knew many of the resort’s employees. “Half of them would have probably lost their jobs,” said Jim Justice. Besides, “my parents had instilled in me that The Greenbrier was like the Emerald City. It was a treasure for West Virginia.”

Justice swooped up the resort for a reported $20.1 million, cut a deal to avert any legal tussles with Marriott, and guaranteed all of the property’s debt repayments, freeing it from bankruptcy.

Infused with a reported $800 million from the sale of some coalmines, Justice set about reinvigorating the property and its food and beverage business, recruiting Lavin from The Sanctuary at Kiawah Island Golf Resort in South Carolina and Rosendale from Columbus, Ohio, where he’d closed a well-regarded namesake restaurant.


The strategy, said Rosendale, is not to nudge the clock forward but to spin it back. “We want to restore and elevate the luster of The Main Dining Room,” he said. “Because of its history, the menu will continue to focus on European dishes and classic cooking methods, using local and seasonally sourced products” for some regional flair.

“We’re not going to change dishes like the Hollandaise salmon or the traditional short ribs, except to make them better,” explained Lavin, adding that a typical check should still fall around the current average of $60, excluding wine. “Those things are sacred.”

The tableside prep that might’ve dazzled Gatsby Era swells will be restored to earlier levels of showmanship, and uniforms will similarly be given a retro makeover.

“We’ll still have a dress code, we’ll still have violin and piano music at dinner — those things are never going away,” he said. “We have to be very, very careful not to disrupt our traditions, because that’s why some of the people come here.”

More contemporary and casual tastes will be accommodated by new restaurants, including an Asian concept and sushi bar in the 80,000-square-foot casino that opens this spring. “We’re adding five outlets in the next year,” Lavin said.

A pastiche of the old and new was evident — and appreciated — by Patti Nickell, a freelance travel writer in Lexington, Ky., who recently visited The Greenbrier for a story. Her research included eating in The Main Dining Room.

“I was mesmerized,” said Nickell, who gives her age as fortysomething. “What is so lacking in the United States is the sense of history, of grandeur, of luxury. We don’t dress up for dinner. We don’t want to get out of our flip-flops.”

At the restaurant, “I was escorted to my seat by a maitre d' who’s been there for 35 years, escorting people to their seats,” she said. “It was timeless. I felt as if I was in the dining room of the QE II. It’s the sort of thing you’d find at the Savoy in Britain, or maybe the Ritz in Paris.”

Nickell noted that the property is stressing its impressive historical features as it moves into new amenities like casinos. Included is The Bunker, a refuge secretly built during the 1950s to house leaders of the U.S. government in the event of a nuclear war. Its presence was a classified secret until the cover was blown by a newspaper in 1992. Now, decommissioned, it’s the focus of a tour.

The efforts to revive the resort by broadening its appeal are already showing results, said Lavin. “We’ve already doubled what we did last year in our advanced bookings for 2010,” he explained.

Because The Main Dining Room draws almost exclusively from the 721 guest rooms, the leap in occupancy should enable the restaurant to hit 2010 sales of $8 million, compared with a 2009 intake of $5 million, Lavin said. His department is expected to generate $34 million in revenues overall, compared with $20 million last year.

Justice points out that he’s not some coal-mining bumpkin, long on dollars but short on sense, as some reports have suggested. “My MBA is in marketing and advertising, and I’ve run 47 businesses, some service-oriented, some more industrial,” he said. “And I really, truly know how to take care of people.

“Someone had to put a little more energy into an elegant and traditional place that carries a lot of history,” he said. “I’m going to do it.”