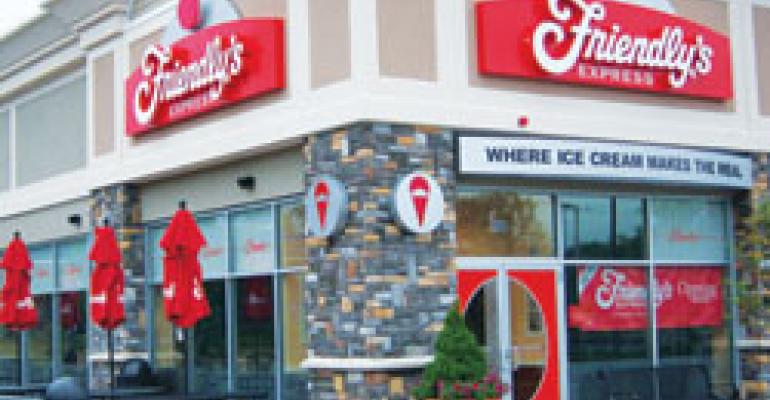 Cost cutting is not the only reason full-service restaurant brands are racing to roll out express units.

Friendly’s and Black-eyed Pea, two chains trying to turn their fortunes around after years of struggling, are the latest to debut express offshoots of their full-service brands. Friendly’s, a 505-unit family-dining chain, opened its express test unit Aug. 5 in Mansfield, Mass., and Black-eyed Pea, a 32-unit casual-dining chain, debuted its store June 25 in Austin, Texas. Other chains that are testing express concepts include IHOP, Denny’s Corp. and Baskin-Robbins.

“For us, this really evolved out of the recognition that even though our customer had a desire for Black-eyed Pea’s great food, they wanted it provided in a different environment,” said Bob Langford, chief executive of the Houston-based chain. “There was high demand for vegetables and homestyle food, but our customers, who are basically third-generation users, wanted it in a fast-casual setting. They want great-quality food, but they want it served in a faster fashion. So, to become relevant, we aligned [the concept] into an experience everyone would appreciate.”

More chain operators are experimenting with the express model because their Millennial customers are letting them know the full-service model is not their preferred dining experience, said Dennis Lombardi, vice president of WD Partners, a Columbus, Ohio-based foodservice consulting firm.

“Full service is experimenting with the modified, limited-service model because their consumers find the format much more acceptable,” he said. “Not only do they like the fact that they control the amount of time they spend, they also like saving the 18 percent to 20 percent tip in this down economy.”

Jim Sullivan, vice president of franchise development for Wilbraham, Mass.-based Friendly’s Ice Cream Corp., said that with the express model, the company is targeting its core full-service consumer—families with kids—but is making a push to attract younger females as well.

The 2,200-square-foot store features a streamlined version of the chain’s menu, including its signature Supermelt sandwiches, burgers, salads and ice-cream desserts, and all of the meals are priced under $10.

Sullivan also said service times at the unit average between six and eight minutes, making the average visit last 25 minutes, versus 45 minutes at a traditional store.

“We’re targeting our core consumer, but what works for us is they can use us in a different, more convenient fashion,” he said. “Folks who may not want to use us, for example, in the lunch daypart may use us based on speed and portability of our offerings. This concept allows our customers to enjoy great food in a short time period that fits their busy lifestyles.”

Black-eyed Pea’s Langford, in trying to put that chain’s express model into context, noted that the Austin prototype also has a smaller footprint, approximately 3,500 square feet, compared with the full-service, big-box model that is typically around 5,500 square feet to 6,200 square feet in size. While he said some items have been removed from the menu, it has mainly remained intact. The check average is in line with Friendly’s; it too hovers around $10 per person.

He said that in addition to drawing in the younger customer base, the other big driver is the decrease in capital expenditures needed to build out the express model.

“I do think it is a combination of trying to respond to the fastpaced society we have and a reflection of the economic burden that has been put on development,” Langford said. “Frankly, it doesn’t require as much money to go into an in-line location as it does a freestanding unit. It’s the perfect crosshair between what the customer wants and what the developer can afford. When they meet at that intersection, that’s where you start getting fast casual.”

He said that startup costs for Black-eyed Pea’s express model were between $400,000 and $600,000 lower “just in terms of the square footage and dollars per foot” for real estate involved.

Sullivan said the price tag for a Friendly’s Express unit also was about half the amount it would cost to build a big-box store.

“Development and capital investment costs run between $550,000 and $600,000 for the express unit and between $1.2 million and $1.3 million for a fullstanding restaurant,” Sullivan said. “It’s much easier to go into an existing space, a strip center, and just fit it out.”

Lombardi said another reason operators are embracing the express format is its reduced labor requirement. In express units, food servers are substituted with food runners so fewer employees are needed to run the operation.

“This may not now be a motivator, but it may become more important when you think of the increasing costs associated with labor, especially when you think of [having to provide] health care or mandated health care,” he said. “Looking at models that use less labor has some limited benefits.”

Sullivan said the company expects to realize labor-related savings of 2 percent to 3 percent as a result of the express store.

Express models also offer operators the opportunity to pursue nontraditional locations, such as airports, colleges and hospitals. Friendly’s says it intends to take advantage of that business stream within the next year or two.

“What this does for us is it gives us a brand extension, gets us into markets we couldn’t enter before based on real-estate barriers,” Sullivan said.

But don’t think that signals the end of the full-service store; it is here to stay, Lombardi said.

“The traditional model is not going away; that clearly is not what I see on the radar screen,” he said. “It is much like developing an alternative development strategy that supplements the brand. It’s not going to replace existing units in any wholesale fashion.”— [email protected]