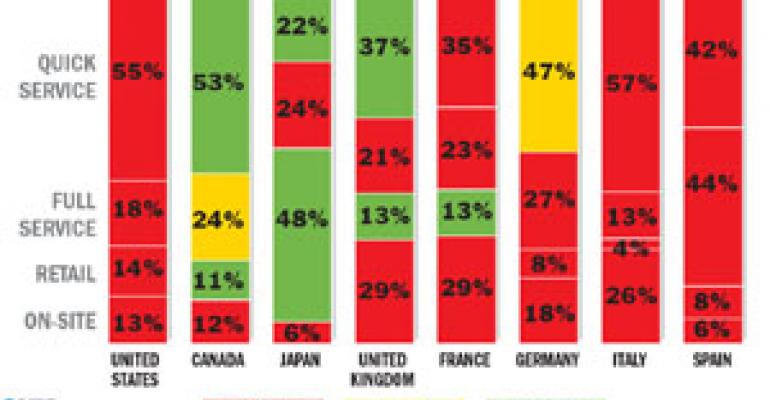 With consumers cutting back on visits and spending in response to the ongoing economic downturn, the global foodservice industry has been under the weather for some time.

But the industry’s health, at least in some countries, began to show some signs of improvement in the second quarter of this year, say officials at market research firm The NPD Group.

According to the Port Washington, N.Y.-based firm’s annual examination of the state of the global restaurant industry, while broad weaknesses remain in consumer spending and traffic in nearly all of eight countries examined, there was growth in the retail and quick-service segments in several of those countries.

“Globally, it’s broad decline but pockets of growth,” said Bob O’Brien, NPD senior vice president of foodservice. “[Growth in quick-service and retail] are the first sort of signs of health.”

Although some countries experienced expanding gross domestic product or improving consumer confidence, brightening economics did not inspire consumers to make more restaurant visits, NPD found. In the second quarter of this year traffic was down in every country. Only Canadian consumers visited restaurants more than they did a year ago.

The industry, however, did see traffic hikes in some segments during the quarter ended in June, NPD found. Retail was the most broadly strong segment, with growth in Canada, Japan, the United Kingdom and France. Quick-service outlets, which generally make up a larger part of the industry, showed growth in Canada, Japan and the United Kingdom and were flat in Germany. Spain, Italy and the United States were the only countries that were unable to pull off even flat traffic counts in any segment this quarter. The growth in quick service and retail is particularly notable, said O’Brien, considering there was no growth at all last year except in Canada.

Overall Canada remained the strongest market, as it was in the first quarter and throughout 2008. In the quarter ended in June, the country that comprises most of North America showed growth or was flat in all segments except for on-site, which was down in all eight countries.

“The United States is one of the weakest restaurant industries in the world,” O’Brien said. “It’s so universally bad in the U.S. right now, certainly in this last quarter. And yet just across the border in Canada, where the economy is not as bad, the industry was strong.”

When demand is weak, prices typically drop or at least don’t grow as much. And yet, Japan and Spain were the only countries able to drive down what consumers spent per meal, NPD found. In the second quarter the average price of a meal in Japan was down more than 4 percent. In Spain it was down 2.4 percent. Check averages remained flat in Canada, Germany, Italy and the United Kingdom. Only in the United States did check averages rise. The average cost per meal here increased 3 percent.

In the quarter ended in June versus the same period a year ago, overall consumer spending at foodservice outlets declined in every country except for Canada. The biggest declines occurred in Spain and Japan, where spending dropped 6 percent and 4.5 percent, respectively. The smallest decreases occurred in the United States, Germany and the United Kingdom, all of which had declines of less than 1 percent.

“The [U.S.] foodservice market is not reflecting the cutback in check you might expect in a weak market,” O’Brien said, “indicating there’s still something restaurant operators could do to increase traffic.”

For example, O’Brien said that during the recession of the early 1990s, prices did not grow at this rate. However, the United States has a history of food-away-from-home price increases despite the state of the economy. According to the Bureau of Labor Statistics, there has not been a 12-month period where prices for food-away-from-home declined since the Department began tracking it back in 1954.

While U.S. operators might be behaving nontraditionally, industry experts agree that no other country has been hit by this recession in quite the same way as the United States. In addition, some countries, including Canada already have declared the recession to be officially over.

“I don’t think it’s the fault of U.S. restaurant operators,” Jane Graham, president of Canadian food-service at NPD, said of the ailing U.S. foodservice industry. “Because the downturn was shallower than expected [in Canada], [consumers] did not need to change habits.”

But consumers across the globe did show some common behaviors in the most recent quarter. According to the data, consumers are exhibiting a growing taste for small indulgences such as snacks, ice cream and alcoholic beverages. “Consumers [are] using restaurants as low-cost options to indulge themselves,” O’Brien said.

For example, afternoon snack traffic is booming in France, NPD found. The upswing is likely a result of the French using the day-part to have a break or treat the kids with foods such as ice cream, croissants or desserts for a less money than then they would spend having dinner out. Much of the increased consumer spending in Canada is coming from afternoon snacks and lunch, and in Germany, snack business has bounced back in the second quarter after taking a hit earlier in the year.

While Canada is the only country with increases in traffic and spending, industry experts there say it’s not all wine and roses.

“There are certain pockets within the foodservice industry in Canada that are doing well and others that are not,” said Geoff Wilson, president of fs Strategy, a Mississauga, Ontario-based food-service consulting firm.

For example, Wilson said food-service outlets located in areas of the country that are dependent on the ailing manufacturing or tourism industries are not performing well, while eateries in provinces such as Saskatchewan, which is more dependent on the country’s growing agribusiness, are thriving.

Garth Whyte, president of the Canadian Restaurant and Food-services Association, acknowledged that Canadian foodservice is performing better than most overall, but he added there are still many things working against operators.

“Our hurt in terms of the recession is not as bad or as deep as it is in the U.S.,” Whyte said. “Still other issues are cutting into profitability.”

Among the issues he noted were recent sales tax hikes that apply to food purchased at restaurants and incremental minimum wage increases that could push wages up to more than $10 an hour by 2010.

“[But there is] more optimism,” Whyte said. “As a result people are opening up their pocketbooks a bit more.”