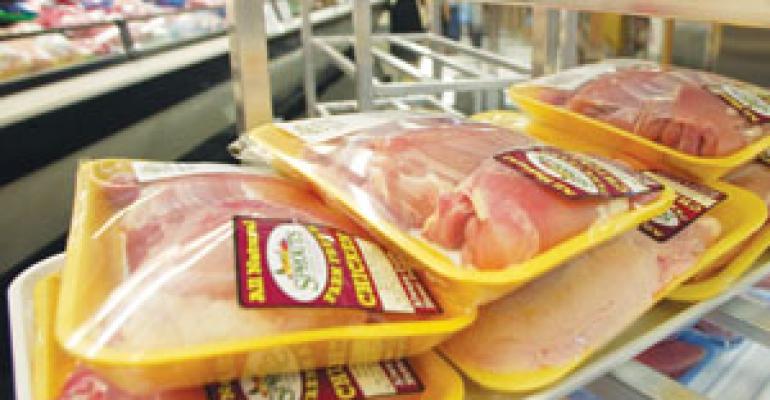 Financial turmoil has helped depress commodity prices across the board. The Dow Jones-AIG index of 19 commodity prices fell a record-setting 21.3 percent in the month of October, hitting a five-year low by the end of the month. But a number of factors is hinting of a market bottom. Last week, the U.S. Department of Agriculture issued an unexpected, mid-month reduction of grain acreage that was bullish for prices. Also, the Federal Reserve’s interest rate reductions will likely take some of the steam out of a strengthening dollar.

The dollar and crude oil prices have been the two biggest influences on agricultural commodity prices in 2008. But even with these two driving forces on the sidelines lately, there still doesn’t seem to be much upside potential for commodity prices. Large investment funds with liquidity and redemption issues continue to unload commodities in a big way. In addition, most economists say that a global recession will sharply cut commodity demand.

Beef – October’s USDA report showed the number of cattle on feedlots down 5 percent from a year ago, which was less than expected. Cattle feeders are adapting to higher feed costs and credit issues by keeping calves on pasture to heavier weights, and this year’s hurricane-based rain helped many grazing areas recover from drought conditions of previous years. August and September placements were skewed toward the heaviest weight categories and point to beef output recovering to near year-ago levels from December 2008 through March 2009.

Financial uncertainty will continue to affect consumers, who already were pulling back in response to high beef prices and less disposable income. Look for “trade-down” strength in lower-priced ground beef, chuck and rounds, along with weakness in choice middle meats. Rib eye, tenders, strips and short loins typically bounce higher in the fall on buying and booking for year-end holiday parties. However, given the financial turmoil, it may not be a big year for celebrating.

Coffee – Usage typically holds up during economic downturns, but the look and taste of our average caffeine fix may change. Consumers are likely to trade down and/or brew more coffee at home. There will be far fewer exotic lattes served, but overall consumption should hold. On the supply side, tree flowering in Brazil has gone well amidst favorable weather. Coffee futures prices are 35 cents per pound below highs hit before Hurricane Gustav just a few months ago. Coffee prices seem to have found a bottom, but there is also not much fundamentally that should push them higher anytime soon.

Dairy – Cheese prices have plummeted by 30 cents per pound since late October. Year-over-year cheese demand has been flat while year-to-date production is up a little over 1 percent. In September, cheese output was up 2.3 percent from a year ago. Lackluster demand will continue as consumers get tighter with discretionary spending. In addition, nonfat dry milk is now below $1, down from over $2 a year ago, removing some of the cheese processing premiums of the past year. Look for block cheese markets to trend downward, possibly touching lows in the $1.50 range in early 2009.

Butter prices remained seasonally high through early November. Retailers and commercial bakeries are concerned that supplies could be tight for the upcoming fall holidays. Butter prices are projected to average nearly $1.47 in 2008 and continue in the mid $1.40s, on average, in 2009.

Grain – October’s USDA Supply and Demand report was initially bearish for grain prices, with higher corn production, bigger ending stocks and lower ethanol usage. But USDA then issued an unexpected “revised” report, cutting a million U.S. corn acres and reducing output. Even given the bullish news, lower crude oil prices have dragged corn prices lower. Corn futures, which were still $5.60 in late September, bottomed at $3.72 per bushel Oct. 27, and since have rebounded to just above $4.

Fundamental news for wheat has been generally neutral, but wheat prices have moved up and down with other commodities. Dry areas of Australia and Argentina got much needed rain, although more is still needed, and most other major winter-wheat countries are in good shape. However, global supplies of higher-grade milling wheat remain tight. Chicago wheat futures, which were still $7.80 in late September before bottoming at $5.47 per bushel Oct. 27, have since rebounded to just above $6.

Oil – The USDA’s aforementioned “correction” lowered 2008 soybean area by 1.1 million acres and output by 45 million bushels. Up until recently, soy oil had moved almost in lockstep with crude-oil prices. But bullish export sales, particularly to China, and the USDA news have helped soy oil futures recover from a low of above 31 cents in late October to the mid-30-cent range in November.

Bumper rapeseed and sunflower crops in Canada, Australia, Russia and Ukraine may put downward pressure on global vegetable oil prices over the next few months. With Russia and Ukraine at a geographic and logistic advantage to get the lion’s share of the European Union business, Canadian canola or rapeseed will be in oversupply and likely will find its way into the United States.

Pork – The USDA’s Hogs and Pigs report showed a smaller breeding herd, down 3 percent, and lower fall and winter farrowing intentions, down about 0.5 percent and 2.9 percent, respectively. As a result, pork output in 2009 is projected to be 1.6 percent lower than this year. For the first eight months of 2008, exports were 69 percent above year-ago levels. But global recession, higher prices and a stronger dollar are expected to erode export sales in 2009. Prices for lean hogs in 2009 are expected to average $52.50, 7 percent above 2008.

Poultry – The overriding force in chicken has been the consistent and sharp pullback by producers. During the eight weeks from Sept. 1 through Oct. 25, egg sets in the USDA’s 19-state report have averaged 6.3 percent below a year ago, while chicks placed for grow-out have been 5.1 percent lower. With an average seven-week grow-out time, those lower placements quickly convert to lower broiler output. August output was 3.2 percent below last year, and lower year-over-year production numbers are expected to continue through the first quarter of 2009.

Year-to-date turkey production through August was running 6.1 percent above a year ago. Those larger supplies are sending turkey prices counter-seasonally lower just weeks before their traditional Thanksgiving peak. The 16-to-22-pound frozen toms, which had been in the 98-cent to $1 range from late August through mid-October, dropped to the low-90-cent range in early November. The USDA’s 2009 forecast is nearly 93 cents, up from a projected average of just under 90 cents for 2008.