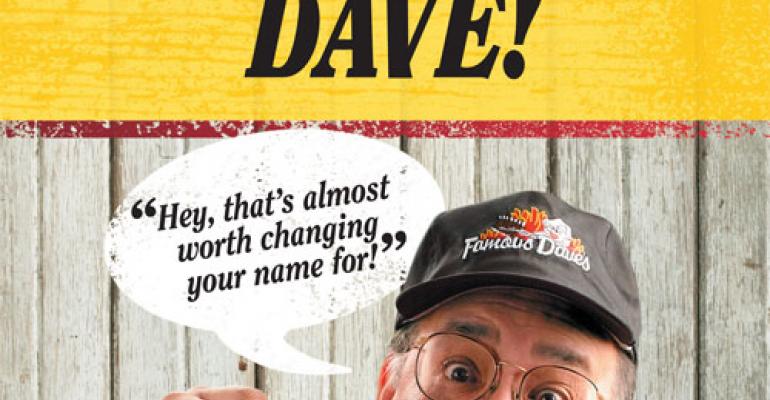 The casual-dining barbecue chain is looking to continue to drive sales in the current quarter as it brings back last year's successful "Dave's Day" promotion on Sunday.

For the second quarter ended July 4, the Minnetonka, Minn.-based company said net income rose 7.1 percent to $2.5 million, or 29 cents per share, compared with $2.4 million, or 26 cents a share, a year earlier. Expenses related to the extinguishment of debt or interest expense decreased from $875,000 in the year-ago period to $262,000 in the latest quarter, it said.

Revenue increased 12.2 percent to $40.7 million for the quarter, reflecting a same-store sales increase of 0.6 percent at corporate stores, compared to a 9.4-percent drop in 2009’s second quarter. A weighted average price increase of around 1.0 percent contributed to that same-store sales improvement, Famous Dave's said. The company's revenue also got a boost from seven franchised restaurants in New York and New Jersey that were acquired by the company in March.

Second-quarter franchise royalties decreased by 5 percent to $4.2 million as a result of the loss of royalties from the acquired restaurants and one shuttered site. Same-store sales at franchised units declined 0.7 percent, compared with a 10.9-percent dip a year earlier, the company said.

The Famous Dave’s chain ended the quarter with 177 restaurants - 52 franchisor-operated and 125 run by franchisees – compared with 176 at the end of the same 2009 period.

Christopher O’Donnell, president and chief executive of Famous Dave’s, noted that “consumers continue to be cautious in their spending behaviors” and attributed the company’s second-quarter performance to “the focused discipline of our organization and our passion to take care of our guests.”

Looking forward, Famous Dave's is getting ready for its second annual "Dave's Day" promotion on Sunday, which offers a free entrée up to $15 for anyone named Dave, David or Davy. People whose middle name is Dave, David or Davy can have one entrée for half off, up to a $7.50 value, as well.

Famous Dave’s had 12,000 customers named Dave or David take it up on the offer last year, said Aric Nissen, the chain's vice president of marketing and research and development. He characterized the last Dave’s Day as the second-busiest day of the year after Father’s Day. After factoring in all the discounts, systemwide sales still increased 50 percent over a normal Sunday in the summer.

“Obviously it’s risky, because the offer is so good and the food cost is so high,” Nissen said. “But we sell an experience, and our promos should reflect the brand personality and the experience we’re creating for people. We didn’t want to restrict this or make it a BOGO. We thought, let’s create good will, and then good will would come back to us. Let’s let it go viral and just go with it.”

As a result, last year the offer brought in Daves visiting for the first time, Daves who had just turned 21 and spent more on alcohol than the chain gave away on the food, and even two parents enjoying an entrée after presenting the birth certificate of their newborn baby, Dave.

Since birth certificates, driver’s licenses and other state-issued forms of ID come from the guest — and don’t need to be created, printed and distributed by Famous Dave’s — the costs to execute the promotion are limited.

Famous Dave’s will approach the coming promotion much as it did during the first Dave’s Day last year, which is to treat it like a holiday on par with Father’s Day, when the restaurant needs its staff and product ready for the highest volume all year.

“What we did last year was we staffed for our biggest day ever, and we got that,” Nissen said. “Restaurants are meant to be busy. When it’s busy, there’s an energy that’s just wonderful.”