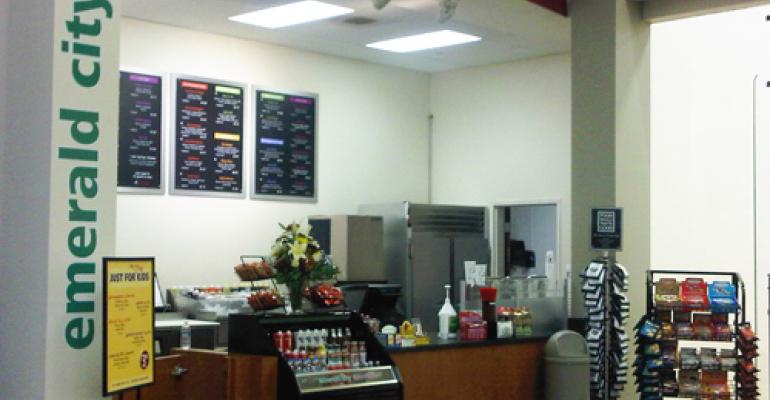 Emerald City Smoothie has developed a kiosk model designed to fit in gyms and other businesses that the chain said cuts the cost of entry roughly in half.

It’s not an exclusive relationship, Schriber noted, but the prototype kiosk developed for the fitness centers fit the roughly 500-square-foot spaces available in such gyms, offering franchisees a new opportunity.

“We facilitate the introduction,” he said. “The pre-designed format or business model makes it a consistent offering.”

The kiosks also work inside other high-volume businesses, said Julie Vance, Emerald City’s vice president of operations. For example, a franchisee in Washington state opened an Emerald City inside a busy Chevron station.

Of the 60-units open within the almost-all-franchised smoothie chain, eight are kiosks, Schriber said.

At a time when funding for franchisees is tough, the goal is to make the cost of entry more accessible with the smaller footprint, Schriber said.

Franchisees also would get the marketing benefit of a co-brand with the host facility, as well as lower overhead and labor costs, Schriber said.

Though the menu board is more condensed, the kiosk locations can offer a full menu of the chain’s hot and cold smoothies.

Though the company at one point had a goal of reaching 1,000 locations by 2017, Schriber said that target may be “too aggressive” in today’s challenging economic times. Currently the chain is opening 10 to 20 locations each year.

“We’re concentrating on controlled growth and quality,” he said.