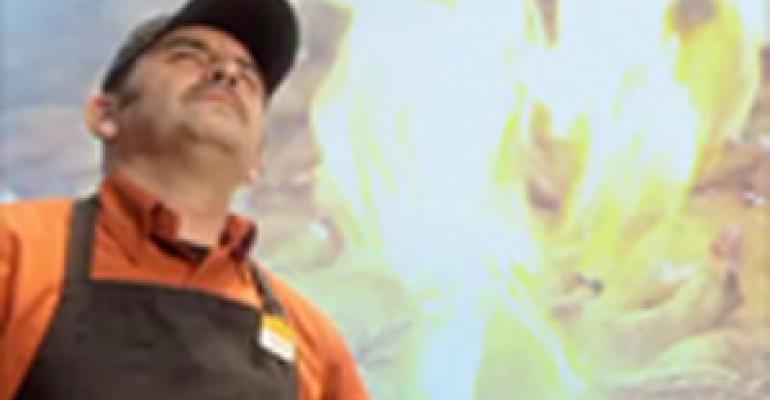 El Pollo Loco unveiled Monday a new multimedia campaign focusing on the chain’s “made by hand” menu in an ongoing push to reinvigorate sales.

The “Feel the Mexcellence!” initiative includes television and radio ads, as well as social media components and in-store signage. The campaign was developed by Los Angeles-based agency goodness Mfg., which was hired in February to develop a new marketing strategy for the 412-unit quick-service chain.

In the past, El Pollo Loco has used two agencies to develop separate campaigns for Spanish- and English-language media. Now the brand is focusing its efforts on one campaign designed to reach both its loyal Hispanic audience and a more general audience and younger demographic.

“We’re one brand and we wanted to reach our market with one voice,” he said.

Though marketing spending for the chain remains about the same as in past years — about 4 percent of sales — Hardison said integrating the English- and Spanish-language campaigns offers efficiencies that provide more bang for the buck.

Among those efficiencies, El Pollo Loco can reach more English-as-a-first-language speakers who are familiar with brands like Chipotle Mexican Grill, Hardison said.

Though frequent fast-food customers tend to be younger than 20 years old, El Pollo Loco is also targeting consumers between ages 25 and 34, while still trying to hold on to faithful older customers.

As a result, the campaign includes a social media component with a “Pass the Flame” game that began Monday, inviting users to visit El Pollo Loco’s Facebook page to create a virtual flame that they can pass to friends to earn a coupon.

The new television ads were developed from a publicity stunt held earlier this year, in which a team of employees attempted to start a fire with a 25-foot bow drill — essentially a giant pole that they moved like a spindle with ropes in a sort of tug of war to create enough friction to start an ember.

Hardison said they were hoping to set a world record for starting a fire with the largest bow drill, but in the end, it didn’t work. The ember shown in the commercial was made with “special effects,” he said.

Still, the commercial focused on what differentiates El Pollo Loco from other quick-service concepts: the fact that most items on the menu are made by hand.

The current ad campaign also highlights El Pollo Loco’s $5 combination meal, which includes a two-piece leg and thigh, two sides and a drink; as well as a $10 whole chicken offer, which comes with eight free tortillas. Both deals are available through the end of July.

El Pollo Loco has struggled in recent years, largely because of high unemployment rates in its core market of Southern California.

Earlier this year, the chain rolled out a new line of premium sides, which Hardison said have been very popular, including a sweet corn cake, chile-lime seasoned grilled corn and sweet potato fries.

Later this month, El Pollo Loco will debut a new line of burritos.

The company is also working on a new prototype design that is likely to be in tests starting in the fourth quarter.