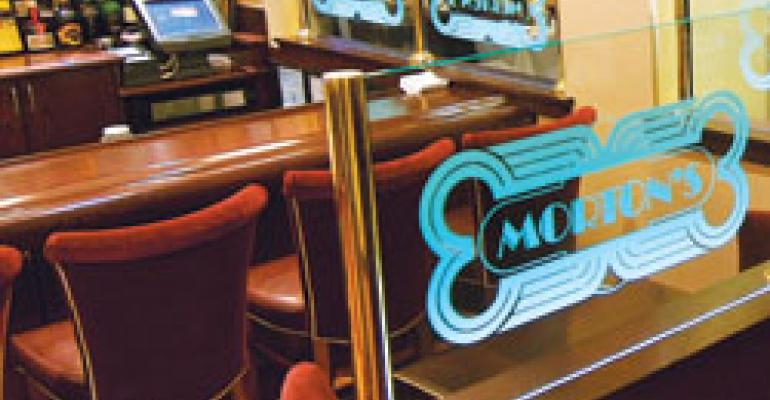 As the economy continues to take a toll on discretionary expenses such as restaurant meals, high-end steakhouse chains hit by reduced business spending are confronting a bigger set of challenges.

With 80-unit Morton’s and 120-unit Ruth’s Chris both reporting profit declines and falloffs in same-store sales in the 7-percent range for their third quarters, they and other upscale steakhouse competitors are revving up strategies to improve business.

The Palm, Shula’s Steak House, Sullivan’s Steakhouse and Del Frisco’s Double Eagle Steak House are among the players pursuing common strategies, such as efforts to make their bars destinations in themselves. Campaigns to attract more social business, upgrade service, promote seasonal and limited-time specials and boost loyalty club membership are other tactics the chains are trying.

Morton’s, while observing its 30th anniversary this year, is focusing “on the things we can control,” said Edie Ames, the Chicago-based chain’s president. With most locations being near convention centers, Morton’s is especially conscious of delivering genuine hospitality, updating its older restaurants and attracting consumers interested in an experience that’s more casual than that of the traditional steakhouse dining room, Ames added.

Restaurant managers and staff are soliciting guest feedback even more than usual in attempts to exceed customer expectations, she said. Acting on that feedback, Morton’s has introduced more seafood, a livelier bar with its own lower-priced menu, and a softer ambience with windows and more light.

While corporate occasions historically have been about 80 percent of Morton’s business, there recently has been a shift toward attracting more social diners as convention attendance and business travel have slipped. Some social customers who typically go to Morton’s to celebrate special occasions have started to come in more often for affordable promotions, such as the four-course steak-and-seafood dinner for two for $99, Ames said.

The company also has beefed up the special-occasion experience with a new protocol that recognizes the dining occasion with personalized table cards and a photograph taken of the celebrants during the evening.

After-work gatherings have increased at Morton’s restaurants that have “Bar 12-21” components, as well as at The Palm, which also has been promoting dining in its bars. Both brands are in the process of rolling out new cocktails.

Dining in the bar costs considerably less, compared with the Palm’s dinner check average of $80. To keep up interest in the dining room experience, the chain has begun offering seasonal items that change every three months.

“In general, people are still going out to eat but not as often,” Halici said. “Frequency has dropped a little.”

“The last six weeks have been challenging,” Mednansky said, adding that projected December sales are “a wild card.”

Both of the company’s higher-end steak brands have just added more moderately priced bottled wines, and four Sullivan’s units are testing a new value menu of six entrées priced from $18 to $22, aimed at boosting weeknight business.

Sullivan’s and Del Frisco’s also have begun selling “value packages” during what ordinarily are slow time slots for holiday parties: from 2 p.m. to 6 p.m. on weekdays and on Sundays.

“The number of people booking is similar to last year at this time, but the caviar and Champagne are not flowing,” Mednansky said.

Through the end of the year, Ruth’s Chris is testing a $39.95 Steak and Stuffed Lobster special and a separate $25-off discount offer distributed via direct mail, Michael O’Donnell, president and chief executive of Ruth’s Hospitality Group, said in recent conference call to discuss third-quarter results.

Seasonal specials and increased loyalty club e-mail marketing are some of the strategies that Shula’s is trying. The Miami Lakes, Fla.-based company oversees a total of 29 restaurants, all but one of which are franchised by major hotels.

Promoting all of Shula’s brands as local social-occasion destinations has shielded the company “a little bit” from the downturn in conventions and hotel occupancy, Herman said. Building its loyalty program to 150,000 members also has helped, he said.

Expansion is continuing for Shula’s and other brands, though not for Ruth’s Hospitality, which recently disclosed plans to reduce development. Shula’s is on course to have opened a total of five new restaurants by the end of 2008 and has three deals signed for 2009 with at least two more pending, Herman said.

Morton’s has grown by five steakhouses this year, compared with six in 2007, and has a handful signed for 2009, a couple of which are relocations of older restaurants. Its first Mexican branch is scheduled to open in the first quarter of 2009 in Mexico City.

Mednansky said expansion of Sullivan’s and Del Frisco’s is not slowing, with four new restaurants opened this year, two signed so far for next year and two more likely to be signed soon.

“We are very opportunistic; we think there will be more favorable leases available next year,” he said, adding that he doesn’t expect the economy to improve at least through the first half of 2009.