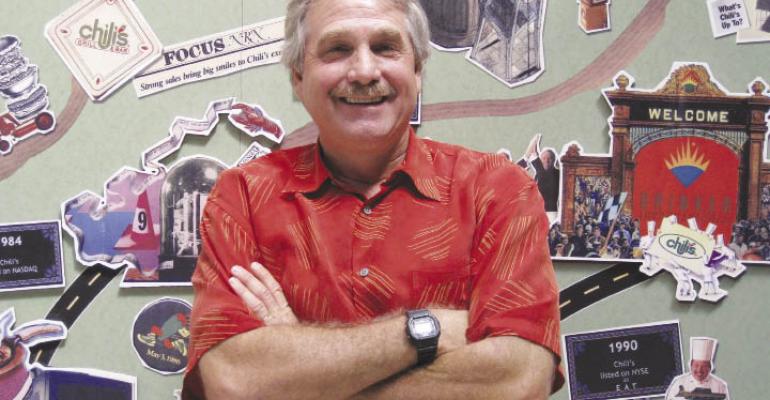 Of all the restaurant executives today, one of the best exemplars of late industry trailblazer Norman Brinker’s leadership and mentoring is Doug Brooks, who for more than 32 years has worked in the company Brinker helped found.

Brooks, the chairman, president and chief executive of Brinker International Inc., is the first recipient of The Norman Award, which recognizes a restaurant executive for extraordinary leadership skills and inspiration of future industry visionaries.

“In terms of inspiring others, the most important thing to me is to be honest. I think you can be a nice guy and hold people accountable,” said Brooks, who has been chairman and chief executive since 2004.

“You always knew that when Norman gave you feedback, he was doing it to help you,” Brooks said. “Trust me, Norman could be a very tough guy in terms of giving you honest feedback. But he also could be the sweetest guy. You didn’t want to let him down.”

The past few years have not been easy for the casual-dining segment. Brooks has met the challenges as Brinker sold off its On The Border Mexican Grill & Cantina and a majority share of its Romano’s Macaroni Grill division and reduced its employee base from 125,000 to 85,000.

“We’re changing the flat tire while the car is moving, but it’s a new world,” Brooks said. “Norman would have embraced it.”

And Brooks said he has tried to emulate Brinker’s approach.

“He was a student of the world,” Brooks recalled. “He said the two most important traits of the greatest leaders he had ever worked with were 1) to be a great listener and 2) to be curious — always wanting to learn.”

Kerry Kramp, president and chief executive of Sizzler USA of Culver City, Calif., said Brooks embodies the characteristics of the people Brinker attracted at his Steak & Ale concept, where Kramp got his industry start.

“There’s a sense of humble servitude,” Kramp said. “Brooks thinks about the people, the food, the ways of relating to the dishwasher on up to the front-line servers and the boardroom. He’s honest and has an unending sense of hospitality and service, which represents the lessons we all got from Norman.”

Toni Brinker said her late husband “believed the restaurant industry provides more than just employment — it creates leaders who then inspire others to believe in themselves and pursue their dreams. Doug embraces that.”

Brooks joined Chili’s in 1978 as a manager at the company’s original location on Greenville Avenue in Dallas. He rose through the ranks at Chili’s and in 1994, he was named president of the brand. In 1999, Brooks was promoted to president and chief operating officer of Brinker International, which now has 1,505 Chili’s Grill & Bar and 45 Maggiano’s Little Italy units.

In describing his leadership style, Brooks said, “Leadership’s job is to make sure the team understands the ‘why’ of what the strategy is and let the team create the ‘how.’”

• “Respect every job and the person who does it.”

• “Don’t ask anyone to do something that I haven’t or wouldn’t do myself.”

• Create a culture of winning and inclusion. Brooks added, “I want to win, and I want everyone to be a part of that.”

Brooks began his restaurant career in 1964 at the age of 13 with a summer job at Youngblood’s Fried Chicken in Dallas. He went on to work for Burger King for three years in high school. He worked in the cafeteria and snack bar while studying hotel and restaurant management at the University of Houston, and landed a post-grad job with the Great Mine Co. steakhouse and then the fledgling Luther’s barbecue in Houston.

His best friend, Ken Dennis, was working at Chili’s and convinced him to join the company, where Brooks now is the longest tenured team member.

In summer 1983, Chili’s founder Larry Lavine sold half the company to Brinker, and Brooks recalls his first encounter with the legendary restaurateur.

“He had a meeting planned for Monday morning — his first day in the office. He had a polo accident that weekend. He had a lot of polo accidents,” Brooks said. “We had the meeting in his room at Presbyterian Hospital.

“So 10 of us sat in his hospital room, and he already had an idea of how to grow the company. He already had a vision and strategy,” he said. “We were afraid of him. We thought he was this coat-and-tie guy who was going to change our company.

“He sure did, but it was for the good,” Brooks continued. “In a couple of minutes, I went from being afraid of him to just being mesmerized by the vision he had. When he talked to you with those big old blue eyes, you just wanted to say ‘Norman, let’s go.’”

Brooks said his philanthropic principles were learned from his mother, Marlene, who died last December. “My mom raised eight children and worked her entire adult life. She taught me about kindness and generosity,” he said. “My mother never had much money, but she still was an incredible philanthropist.”

Brooks has similar traits, especially in his very personal support of the Limbs for Life Foundation of Oklahoma City, which provides prosthetic limbs free to those who cannot afford them.

He was training for the New York City Marathon on the morning of July 22, 1998, when two cars collided on the street where he was running and slammed him through a brick wall. His left leg was amputated. He and his wife, Holly, are members of the Limbs for Life board, and “we will be as long as they let us,” Brooks said.

One of Norman Brinker’s customs that Brooks adheres to is hand-written notes.

“You run into anyone that worked with Norman, they will have a note from him,” he said. “I spend a lot of weekend mornings sending notes to people, because I want other people to feel the same way Norman made me feel.”