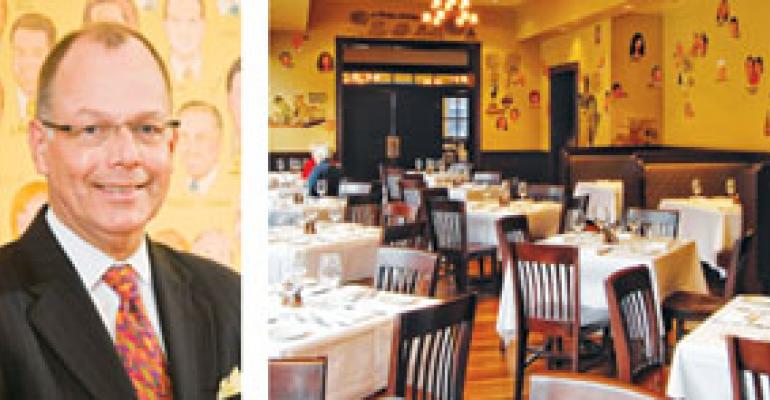 While visiting the Palm restaurant in Orlando, Fla., one Saturday night this year, John Bettin had a flashback to 30 years earlier, to the start of his career.

The president and chief executive of the Palm Restaurant Group, Bettin was doing what he does at least 10 days a month–visiting one of the Palm’s 28 outlets to raise employee morale, trouble-shoot operations and probe customer satisfaction.

But during the predinner service staff meeting when employees were introduced to their “special visitor,” unit managers discovered that two line cooks would be out sick that night.

Bettin’s flashback kicked in when he threw on an apron and manned the sauté station, the very same position he assumed as a trainee when he started 30 years ago at a Houlihan’s restaurant in Kansas City, Mo., as a college dropout looking for work.

Not only would the sauté position become his favorite spot on the line in a career marked by high culinary execution, but the chance hiring would turn out to be the start of a 20-year career with Houlihan’s parent, the now defunct company Gilbert/Robinson.

Bettin is now considered one of the industry’s most successful turnaround artists, whose Midas touch at such brands as Darryl’s, Morton’s of Chicago, Buca di Beppo, Potbelly and now The Palm epitomizes the rare but successful cases of leaders who transitioned from the culinary side of the business into the president’s suite.

Do you miss being in the kitchen?

Yes and no. I don’t miss the physical side of the work. It’s a very, very physical job, and I have a lot of admiration for the men and women on our team who make sure our kitchens work well. Whenever I’m on the road, I make sure I stop by our units and spend time with the kitchen crews.

What do you miss about it?

I miss being in a busy kitchen, especially on a Saturday night.

So that’s why that Orlando visit was so memorable?

Yes. You know, what I miss but got to experience again that night in Orlando is that there is a certain choreography that emerges among crew members on a well-trained cooking line, and despite being down two cooks, we pulled it off. We even had 100 covers more than normal.

Never heard of a kitchen line being compared to a ballet before.

There’s no talking, just smooth execution. It is the most interesting sight and it was great to participate in that again. It was very cool to move behind someone with a hot pan and just tap them on the back to let them know.

“Here’s a guy with no culinary education, no big degrees, yet he has all of these success stories, and I say it’s because he had great mentors and he learned from them. He has a high work ethic, a lot of drive, native intelligence, and I think any career track he would have followed, he would have been successful.”—Phil Hickey, chairman of O’Charley’s and a onetime competitor as the former chairman of Capital Grill steakhouse chain

Chefs have to have good math and accounting skills, but how does that prepare you for corporate finance?

First off, the ability to manage and pay for your inventory, run specials, calculate margins and cost out promotions while managing labor cost as an executive chef is great training. Numbers and statistical analyses always came easy to me, and when I was at Gilbert/ Robinson, Fred Hipp [then chairman] was such a great mentor and coach on the sources and uses of capital.

What made Hipp [now president and chief executive of AMF Bowling Centers Inc.] a good mentor in your career?

Of my 20 years at Gilbert/Robinson, I probably worked closely with Fred for 12 of them. I was very inquisitive, and he never seemed to tire of my questions. He was really more of a coach. So by the time I was promoted vice president of Darryl’s, the first chain I led, I felt I was well-prepared for it.

Who else was a good mentor or friend in the business?

Phil Hickey [chairman of O’Charley’s and former chairman of Rare Hospitality]. We worked together at Houlihan’s and there came a point when, as general managers or area managers, we’d open restaurants together and train the staffs.

Did you ever think 30 years ago you’d be running a restaurant brand one day?

Well, I had an affinity for the restaurant industry. I dreamt about running my own restaurant as an indie. But not a chain. As my career progressed at Gilbert/Robinson, and [as] vice president of Darryl’s [I] turned that brand around, I enjoyed that and thought I could lead a chain.

What’s the part of your job today you like the least?

Well, when you are in the executive office, you don’t have constant interaction with the guest and your employees, and that is why I try to visit our restaurants as often as possible. That’s why I always tell our managers that they have the best jobs in the world because there’s instant gratification. If they have a problem, they have the latitude to solve it instantly. As a CEO, though, I had to learn to let go, to know that you cannot be involved as I used to be. But whether a chef or a CEO, both require a high levels of passion and engagement.