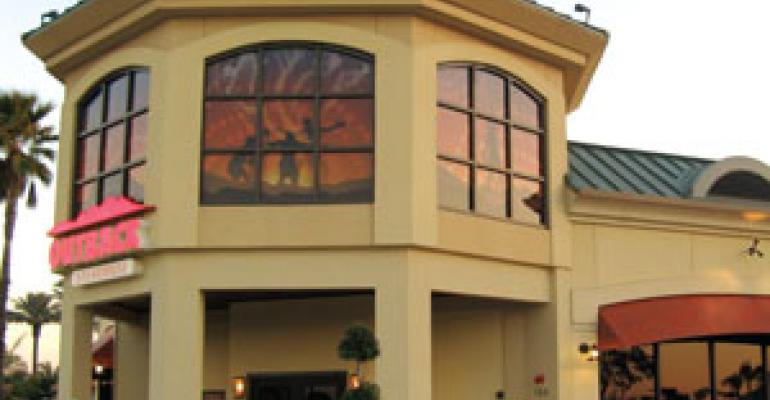 On the cutting edge; Foodies in suits: Tim Gannon

The management teams of the 792 domestic Outback Steakhouse units and the 190 overseas locations in 20 countries will gather for the convention, and Gannon wants the food to be up to his standards.

While the Tampa facility is the R&D home for all of OSI’s concepts, including Carrabba’s Italian Grill, Bonefish Grill, Fleming’s Prime Steakhouse & Wine Bar, Cheeseburger in Paradise, Roy’s, Blue Coral Seafood & Spirits and Lee Roy Selmon’s, the six-member Outback team dwarfs the other teams in size and effort because of the larger size of the flagship chain. In recent months, OSI has announced plans to sell its Roy’s and Cheeseburger in Paradise chains and last fall announced it was selling an 80-percent interest in Lee Roy Selmon’s.

Gannon’s team members, who work long hours and travel often for research, are like family, he says. They vacation together, and Gannon even sheltered Dauterive’s family after it was displaced by Hurricane Katrina.

“It is not the norm for chefs to have an equity position, especially bringing no capital,” he says. “Hats off to Chris and Bob for recognizing the value in the head food person.”

While Gannon was closely involved last year when OSI went private in a $3.2 billion deal, he says he has no trouble straddling the executive and food roles. He avoids much of the corporate minutia and lets his “very able partners” handle most of the nonfood details.

“There are meetings about everything; when they don’t relate to food, I usually exit,” he says. “You have to be careful to stay in what you excel at, because when you stay focused you get to a much higher level than otherwise.”

Gannon could probably now afford to spend all of his days playing polo, a passion, but he says he’d rather keep a hand in the business.

“Doing what you love and keeping the great things about your life alive are what it is all about,” he says. “Once I heard the founder of Wendy’s, Dave Thomas, say he was still flipping burgers. Like Dave, I believe it is important to know the grass roots of who you are. I am always looking for a new and better way, and to do that, I have to be thinking all the time.”

Even when not in the R&D kitchen, Gannon, who calls himself a “from-scratch guy,” always thinks about new menu items.

“No matter where I go, I get inspired,” he says. “We visit restaurants all over the world, not to copy, but for ideas. Just to look at how an Asian restaurant might cook asparagus could inspire me. It never stops, even when my head hits the pillow at night, not in a pressured way but in a creative way. It is a meter you don’t mind running.”

Ellis, the vice president of R&D who has worked closely with Gannon since just after the first Outback opened, says one of Gannon’s many strengths is his palate.

“Tim’s palate is magic,” he says. “He’s the one who taught me how to do ‘from scratch.’ Tim inspires us because he has been there and done that.”

Like many others, Gannon’s career path to restaurants was informal and accidental, albeit fortuitous. Back from a stint studying in Europe and armed with an art history degree in the early 1970s, he recalls a dreary economy and one available art director job with 400-plus applicants. So he moved to the slopes of Aspen, Colo., where he met a French chef who taught him cooking.

Gannon took a trainee job at Steak and Ale, where he met Sullivan and George Beale, who would later found the Houston’s Restaurant chain. Beale transferred Gannon to New Orleans, where he eventually departed the steak chain. Gannon next spent several years honing his skills under mentor Warren Leruth, and also says he learned from Al Copeland and Ella Brennan.

“New Orleans was like a big university, where everyone had something to teach me,” he says.

In 1987 he decided to take a gamble and joined forces with Basham and Sullivan, bringing his culinary expertise to a new casual-dining concept.

The bet paid off, and it didn’t take long for two-hour waits to become the norm at Outback Steakhouse restaurants, as patrons lined up to try Gannon’s signature Bloomin’ Onion and other popular dishes.

To keep that momentum going, especially in a stalling economy, Gannon searches daily to find new flavors to excite, delight and entertain customers.

For Gannon, the hardest part of success is that it is an obstacle to achieving more.

“I never understood that sentiment before, but I now do,” he says. “We have to continue to create milestones to keep that energy way up there, just as if we are opening our first restaurant.”

Roughly 300 to 400 new culinary ideas are tested each year at OSI, although sometimes there are as many as 600 or 700 variations because the R&D team occasionally tries items 10 to 15 different ways.

Ideas come from Outback’s boardroom, corporate and restaurant staffs, and the R&D team. Gannon says he is just a catalyst.

“I just generate a lot of ideas and try to inspire everyone,” he says.

Gannon has the final say before a product goes into a restaurant for testing.

Before reaching that point, Gannon, Ellis and the team test and retest all culinary ideas eight to 10 hours a day.

“We try to stay in the kitchen,” Ellis says. “Not at our desks reading e-mails.”

The test dining room is a simulated Outback Steakhouse dining room, and the founders, presidents and R&D folks all sample menu candidates. Once Gannon approves, the potential item goes into one restaurant for 30 to 60 days in order to “get the operational kinks out,” Gannon says. Next, a five-restaurant test ensues, and then 50 or so restaurants in one geographic market, such as the East Coast, will test the item.

“If it is a really good idea, it can go out all the way, but very few do,” Gannon says. “Sometimes, if we really need an item we may push it a little faster, but the more testing we do, the more success.”

The company recently introduced limited-time offers for the first time in its history, presenting a new set of challenges.

Prior to heavy testing, a potential new product goes through a feasibility study to garner availability, affordability and practicality on a large scale.

Ellis explains that if the process is truly disciplined, it takes a year to roll out.

“We try to be disciplined, so we don’t make big mistakes,” he says. “We have made a couple along the way, but nothing big. Chris [Sullivan] said to us, ‘You are going to break a few glasses along the way,’ and that is true. I believe if we aren’t making mistakes, we aren’t trying hard enough.”

One such mistake was “Brick Chicken,” an item Gannon says was one of the best-tasting offerings ever on the menu. The chicken breasts, seasoned with herbs, had drumettes attached and were cooked with a brick. They required an exact cooking time, however, and if off even a little bit, it showed.

“It worked fine in the test,” Ellis says. “But trying to get it cooked perfectly in the units, well, it was challenging for a fast-paced environment. There are no egos in R&D. If it doesn’t work, let it go.”

Gannon believes the ability to put flavors together is an instinctive and mysterious process that requires a lot of trial and error. His experiments include such things as taking a flavor of something he already likes and then enhancing it with a different protein or seasoning. For instance, once he used the Bloomin’ Onion spice with a broccoli and carrot combination. While it didn’t work, he says, it helped generate other ideas.

He recommends experimenting with spices and herbs in new combinations to see what flavor comes about, and also searching new venues for flavors.

“You have to seek out flavors everywhere, including in holes in the wall and in great fancy places,” he says. “You never know where you are going to find great flavors, that is why it is a wonderful kind of journey.”

He is fascinated by how food changes with temperature.

“An onion, for example, gets sweeter and more delicious with heat,” he says. “Just take a couple pounds of butter and turn on low all day to get that nutty, noisette flavor. You wouldn’t believe it.”

Gannon is proud of everything on the Outback menu, but he is probably most proud of the seared rack of New Zealand Lamb and the Caesar Salad.

“The 16-ounce rack is an upscale, delicious menu item we deliver for great value at about $21.99,” he says. “Our Caesar, which we spent more than a year developing, stands up in flavor. It has Reggiano Parmesan inside the dressing itself. There is nothing similar to that in casual dining.”

Gannon says the best way to menu success, and avoidance of failure, is to repeat testing and proceed slowly. He advises listening to customers and the waitstaff, because they are the people who see things first.

TITLE: co-founder, OSI Restaurant Partners LLC, Tampa, Fla.UNITS: About 1,400 in total, with 792 Outback Steakhouses in the United States, 90 percent of which are company-owned; 190 international units, all of which are franchisedDISHES MOST PROUD OF: New Zealand Lamb, French onion soup and Caesar saladEXECUTIVE’S FLOP: Brick ChickenFOOD CRAVED WHEN RETURNING HOME AFTER TRAVEL: his wife’s cooking and shellfish, especially grilled lobster and shrimp

At the end of the day, he says, you have to “create crave” for your product. “If you do this, you are successful,” he says. “I met Ernest Gallo awhile back when he was 90, yet he still wanted the secret as to why people were willing to wait two hours for our food! He wanted to know our magic, and to me, the key is having a passion about what you do, and always striving for better.”