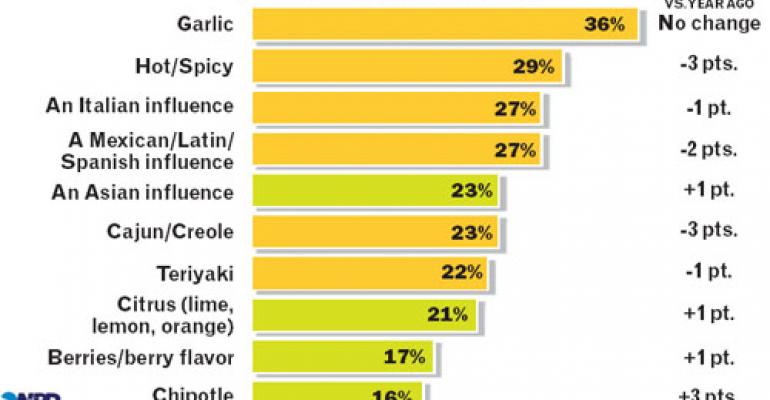 Bold flavors are the key to strengthening weak restaurant sales, according to new data from The NPD Group.

Consumers may be cash-strapped, but operators can prompt spending by appealing to consumers’ desire for stronger flavor profiles and giving them ethnic, spicy and other tastes that are not widely available, the Port Washington, N.Y.-based market research firm found.

“Innovation is key at any time, but [it’s] especially important now,” said NPD analyst Bonnie Riggs. “Operators need to revamp some of their menu to address this new reality. They need to capitalize on some of these trends before they are yesterday’s news.”

In the 12 months ended in June, consumers surveyed by NPD said the top 10 flavors they would like to see more often in restaurant meals were garlic, hot/spicy, Italian, Mexican/Latin/Spanish, Asian, Cajun/Creole, teriyaki, citrus, berries/berry, and chipotle.

Despite consumer interest in all of those flavors, however, only chipotle, citrus, berry and Asian flavors have grown in menu importance in the past five years, NPD found.

“Some things have gone so mainstream … we have an abundance of [them] … now consumers are looking for even more different things,” Riggs said.

The increasing desire for bolder flavors is not limited to a single age group. In the 12 months ended in June, the top-growing flavor among teens, college-aged adults and adults aged 25 to 64 was chipotle, NPD found. Interest from college-aged adults in seeing more of the spicy pepper on restaurant meals was up 6 percent from five years earlier, while interest from teens and adults aged 25 to 64 grew 5 percent and 3 percent, respectively. Chipotle ranked No. 2 among the top flavors with adults 65 and over.

Though diners are notorious for saying they want one thing and then ordering something else altogether, when it comes to bold flavors it appears that they are walking the talk. Many of the flavors consumers said they wanted to see more of are the exact ones they said they’ve recently ordered in restaurants, NPD found. For example, citrus and Asian are among the top flavors consumers said they had in restaurant meals in April, May or June of this year. Other top flavors recently ordered included Mexican/Latin/Spanish, Italian, hot/spicy, garlic, pepper, jalapeño, cilantro and chocolate.

Increased travel, a more ethnically diverse population and the explosion of food media all have contributed to consumers’ growing interest in bolder tastes, industry experts say.

“As a whole, we are finally starting to be more adventurous with our food,” said Julie Snarski, manager of culinary foodservice development at Philadelphia-based David Michael & Co., a flavor development company. “It’s the interest in the different ethnic cuisines. The biggest herb we’ve had for many years was garlic. Suddenly, we’ve got cilantro, adobe [and others].”

“There’s an awareness there driving consumers to push the edge,” he said. “Ethnic is becoming the norm.”

“We have an aging population, so bold flavors could also equate to more flavor,” she said. “[There’s] not enough flavor as we lose our taste buds.”

Still, the bold flavors diners desire aren’t ubiquitous yet. Datassential, a Los Angeles-based menu-tracking firm, which found that even chipotle, Asian, citrus and berry flavors have room to grow on restaurant menus.

Citrus is very popular at fine dining, with just under one-third of restaurants menuing it. Meanwhile, casual-dining restaurants feature citrus about half as often, and quick-service and midscale restaurants have yet to adopt citrus on a large scale. Like citrus, berry flavors are largely the domain of fine dining, making it onto the menus of nearly a quarter of all such restaurants. There is a very low penetration in all other segments.

The incidence of Asian, citrus, berry and chipotle on restaurant menus has grown over the past four years, Datassential found. Asian flavor has seen the most growth since 2005, followed by chipotle. From 2007 to 2009, however, Asian and berry flavors experienced the most growth on menus.

Adding strong flavors to menus may seem like a, well, bold move, especially at a time when consumers are being ultraconservative with their money, but when done right it’s a risk worth taking, experts say.

“[Adding chipotle] is an inexpensive, easy way to deliver an exciting flavor profile,” Rosenfield said. “Adding exotic nuances [can offer] an experience that takes people away from the daily grind.”

The trick for operators, especially those with multiple units, is figuring out what flavors customers want, Snarski said.

“Yes, we are [looking for bold flavors], but what is bold?” she asked. “Does it mean more heat? Stronger flavor? It comes down to operators knowing their [customers].”

Columbus, Ohio-based Charley’s Grilled Subs has proof that adding a little spice to a meal can give business a big kick. The 390-unit quick-service chain specializing in Philly cheese steaks recently introduced a limited-time Spicy Asian BBQ sandwich inspired by traditional Korean spicy-meat sandwiches. Introduced in October as a six-week LTO and then extended for several more weeks, the chain says the popular sandwich has generated more than triple the sales of a typical successful LTO.

“It was a huge gamble for us … to say ‘spicy Asian’ in a cheese steak joint,” said Chung Choe, Charley’s director of research and development. “It was a bold move.”

The success of the Spicy Asian BBQ sandwich, which features steak that is marinated with pears, green onions and an assortment of Korean spices, and served with provolone cheese, comes on the heels of another taste experiment gone right. Earlier in the year, Charley’s rolled out a chipotle chicken LTO with jalapeño pepper-flavored bacon that was so successful it was later reintroduced.

But restaurants can go too far with flavor, Choe said. A few years ago the chain introduced the Firecracker Chicken Sub, a grilled chicken breast topped with a combination of Buffalo sauce, barbeque sauce and giardiniera, a spicy sauce made from hot peppers, and marinated vegetables, which proved to be too hot for customers to handle.

“We always try to stay slightly ahead of the curve,” Choe said. “You cannot go too far out or stay too boring.”