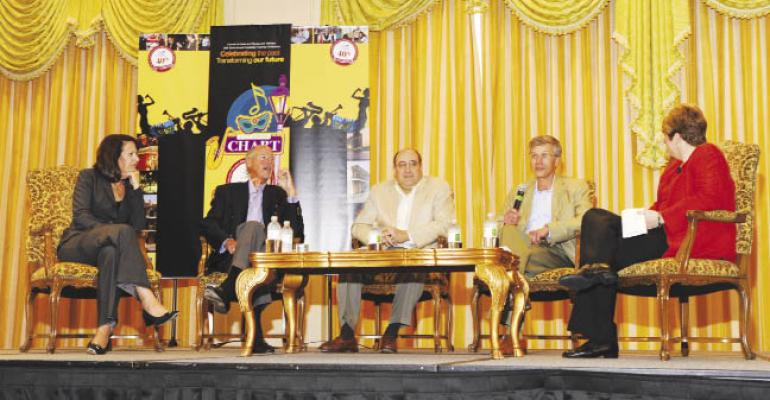 Communication is key to keeping employees happy in tough times

With raises and reward programs still casualties of the economy at many companies, communication is critical for boosting morale and business performance, said a group of restaurant executives at a recent gathering in New Orleans of hotel and restaurant trainers.

“We’ve all had difficult decisions to make, but hopefully we got out in front and communicated the reasons behind them,” said David Lloyd, president of Bertucci’s Corp., the Northborough, Mass.-based parent of the 93-unit casual-dining Italian restaurant chain. “People are smart. They understand, and they want to hear from you. They want you to be honest.”

Lloyd joined a panel discussion of top industry executives at the 40th anniversary celebration of the Council of Hotel and Restaurant Trainers. More than 230 training and human-resources executives met at the end of July for the three-day event at the Ritz-Carlton in New Orleans.

CHART, a nonprofit organization, has more than 450 members from more than 300 multiunit restaurant and hotel companies, representing a workforce of almost 5 million.

CHART holds two conferences a year, and the New Orleans event was its 80th gathering in the last 40 years. Speakers and breakout sessions emphasized ways to improve training and training’s role within an organization. Leaders on the panel maintained that companies committed to training could better weather financial storms.

“If your organization isn’t committed to training and people development from the top level, it’s won’t work,” said Jerome Cataldo, president of Schaumburg, Ill.-based Hostmark Hospitality Group, which manages hundreds of hotel properties around the country. “It’s a hard, constant process. It has to be looked at every single day.”

Companies must be consistent in good times and in bad, and training gives that consistency, said Mark Running, president of Roy’s, the fine-dining chain founded by Honolulu chef Roy Yamaguchi. The 18-unit company is a joint venture with OSI Restaurant Partners Inc., the Orlando, Fla.-based parent of Outback Steakhouse.

“The consistency you had before things got bad needs to have been the same in these past couple of years,” Running said. “Do not compromise. It’s real easy to cut back and not give raises and not acknowledge people. We didn’t do that, and as things get better, they won’t leave.”

Some companies did have to make cuts, said the fourth member of the panel, Edie Ames, who joined Del Frisco’s Restaurant Group as its chief operating officer in May. The restaurant group has eight Del Frisco’s Double Eagle Steakhouses around the country. Prior to that Ames was president of Morton’s The Steakhouse in Chicago, where she had to suspend a long-running employee awards program.

Operators need to keep employees motivated and involved, and that is easier to do if companies don’t make drastic, across-the-board cuts in spending, Cataldo said.

“It’s going to be a challenge going forward as business starts rolling and revenue creeps up,” he said. “Revenue is not going to come back in 20- or 30-percent jumps as it went down.”

Right now it’s important to keep operations and training departments talking to each other, Running advised.

“You need to keep them in the room together,” he said. “Be relentless and not let them come out until they get a consensus. [Training] is always going be an expense, but operators need to see the value in it.”

Running received CHART’s Commitment to People Award at a gala that capped off the conference. The evening included a silent auction that raised $10,000 for student scholarships. In addition, nearly 40 CHART members spent a day before the conference volunteering with Habitat for Humanity in New Orleans.