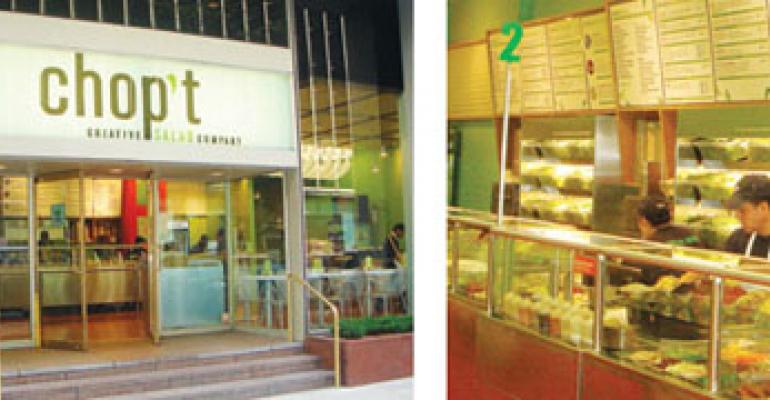 What should be any restaurant owners’ nightmare turned into a surprise marketing strategy for Chop’t founders Tony Shure and Colin McCabe. On the very first day they opened their specialty salad restaurant in Manhattan in January 2001, the computers went down. Instead of shutting the doors, they decided to give away the food for free.

“Then people went back to their offices and said, ‘There’s this new salad place on 17th Street, and they’re giving away food for free.’ And we had a line down the block,” Shure remembers. “We’ve been blessed with long, fast-moving lines from day one.”

Chop’t Creative Salad Company is drawing attention as a hip, more healthful lunch alternative to pizza and burgers. With four units in New York and five in Washington, D.C., Shure says the plan is to continue opening restaurants in great locations and please customers by making the food better every day.

Reviews from commercial newspapers and independent bloggers alike mention the range of ingredients and the incredible demand.

“We get really long lines because of the selection, the amount of ingredients, and the involvement of the customer, but we move very fast,” Shure says.

Technomic’s executive vice president Darren Tristano says he believes Chop’t’s specialty salad concept has the right elements for success. “They’re reminiscent of London-based chains with customized service, healthy positioning and fast-paced energy,” Tristano says. “And because of their location they’re getting some of the lunch business and the high-end business.”

Shure and McCabe, New Yorkers born and raised, had always worked in the restaurant industry, but when they started developing a business plan for their own venture they began thinking about a very focused concept. “We figured that if we concentrated on one thing and kept it simple that we would be the leader in that segment,” Shure says.

According to Tristano, very few limited-service restaurants can be competitive unless they find a way to specialize within the market. But he says that Chop’t has set itself apart from other places that just serve salad along with their burgers or pasta.

“We want to do our best to earn our spot in the new brands that are going to dominate the landscape of the future,” Shure says. “We’re not going to start doing breakfast. We’re in the salad business. We’re totally consumed by it and we love it.”

The Chop’t experience begins with fresh ingredients that have passed muster with a “Lettuce Bouncer” at every location, and all produce, even the lemons in the lemonade, is cleaned with an organic vegetable wash. Next in line come proteins like turkey and beef roasted fresh by Chop’t. The only ingredients you will see come out of a can in the Chop’t kitchens are artichokes and hearts of palm.

“We’re trying to have every single ingredient at our place better than the next guy’s,” Shure says. “Chop’t has a story behind it that we’re proud of.”

Part of this story is the 26 dressings made in house at Chop’t. With flavors like General Tso’s Chipotle, Thai Curry Rocket Fuel and Carrot Ginger, along with classics like Steakhouse Blue Cheese and Balsamic Vinaigrette, Chop’t has seen enough demand to begin bottling dressings for sale in store. The dressings are made fresh every day, but there are currently no plans to market them for distribution.

“We’re careful,” Shure says. “We want to steer this ship in the right direction and at the right speed. We don’t want to grow too fast and sacrifice quality.”

With the average check at about $10, customers can select from chef-designed salads, such as the Beverly Hills Chef with iceberg lettuce, grilled chicken, Italian salami, mozzarella cheese, tomato and chickpeas. Or the more adventurous can take full advantage of Chop’t’s impressive array of ingredients and add up to four ingredients to their lettuce choice. Toppings like grilled asparagus, goat cheese and edamame are available for an additional charge ranging from 50 cents to $1. Different meats and nonmeats, such as egg whites and grilled portobello, are added at price points from $1 for bacon to $3.25 for grilled shrimp.

After the customer selects either one of the chef-designed salads or a concoction of their choosing, the salad is run through a half-moon shaped mezzaluna chopper, incorporating all the ingredients into each bite.

Zach Brooks, from Manhattan lunch-specialty blog , says there’s an element of theater to what they do at Chop’t.

“[Chop’t has] taken that ‘watching your food get made and choosing the ingredients’ concept that have worked at places like Chipotle and Coldstone and done something with it,” he says.

When planning their restaurant endeavor, Shure says that he and McCabe always wanted an “exhibition-style kitchen.”

“A little bit of show is nice, too, because in this day and age of interactivity, people want control over everything,” Shure says. “They’re entitled to it at Chop’t.”

Tristano says that the concept’s healthful positioning should give it an advantage as Shure and McCabe continue to develop the brand and expand units. He says he believes Chop’t “has more legs when it comes to urban settings,” but he thinks they have the potential to be successful across the United States.

Shure wants to use the long lines that build up as a way to brand their restaurant. “We get people saying they don’t understand why the lines are so long. They say it’s just a salad,” Shure says. “We want them to understand that it’s not just a salad. It’s a Chop’t salad.”