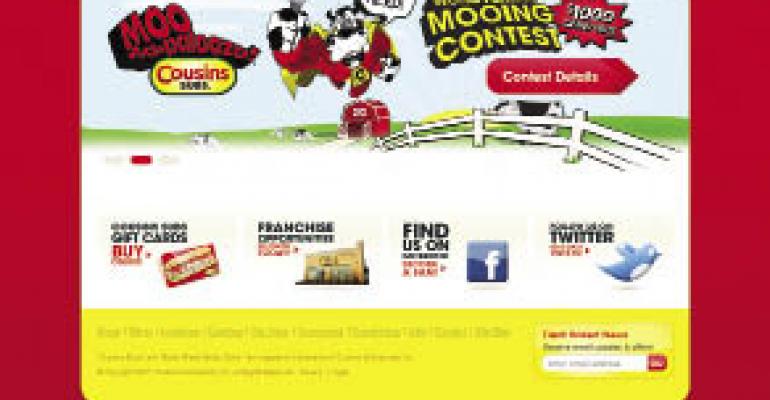 A﻿bout a month after launching a revamped website, Cousins Subs saw a 10-percent increase in  Facebook fans and Twitter followers — and that wasn’t an unintended consequence.

While Cousins and other medium-size brands have reported a bump in social media activity after upgrading their “dotcoms,” some observers say the correlation is not necessarily direct. However, they add that the ways in which traditional websites complement social media can get traction if restaurants use both to actively engage customers.

“If we’re going to use these sites to interact with our customers, we want them to have more prominent placement,” McCoy said. “It lets people see we’re serious about what we’re doing on those sites.”

Menomonee Falls, Wis.-based Cousins’ Facebook presence has grown to more than 3,330 fans. The brand has 147 units in six states.

Cousins will start wielding social media’s promotion power at some point, McCoy added, but for now it’s focused on finding and interacting with its most ardent fans.

“At this point, we’re trying to build a community of brand loyalists,” he said. “We do plan to expand and do some different contests on Facebook and Twitter, but our plan wasn’t to just give out 1,000 free subs to people who wouldn’t interact with us.”

Cousins’ Facebook friends may number only a few thousand, but they’re enthusiastic. The brand often gets messages from fans clamoring for a Cousins unit in their town, which has been useful for winning over potential franchisees, McCoy said.

Così, the Deerfield, Ill.-based operator or franchisor of 144 bakery-cafes in 18 states, recently launched an updated version of its six-year-old website, which had previously been focused on recruiting franchisees and employees.

The upgrade was part of a new overall marketing strategy for Così’s first integrated digital campaign, which included sponsorship of and product placement on NBC New York’s “Talk Stoop” Web series as well as digital outdoor advertising and social media.

“What was necessary was to focus our site around the customer experience,” said Keith Stewart, senior marketing manager. “They were coming in and having a dynamic experience around food and talking about nutrition and local community events, and these were things the website had to address.”

As a result, Così’s menu and nutrition sections are more involved now, he said, and the chain is in the process of deploying individual restaurant pages.

Nick Powills, chief executive of No Limit Media Consulting, doesn’t quite buy the “If you build it, they will come” link between an updated website and more social media followers, pointing out that some restaurant brands that compete with his clients have six-figure follower totals with old and old-looking websites.

“Having a good website is basic 101, but there’s no direct relation to social media success,” Powills said. “A digital marketing umbrella should incorporate the website, social media, PR and advertising, especially if the way we communicate keeps changing.”

While Powills is skeptical of the pitch that updating a website automatically bolsters social media presence, he said the two avenues can complement one another, so cohesiveness matters.

“It can’t hurt to have more social media calls-to-action on your website,” he said. “But consumers still will go to Google and search your brand. If they click on your Facebook page, it needs to have brand similarities. Tabs on your website should also exist on Facebook. Customers should be able to do as much on your fan page as on your dotcom.”

Getting people moving back and forth between traditional dotcoms and social media profiles has value in search engine optimization, or SEO, Powills added. An “old trick” for that is making custom websites, he said, such as Cousins’ moo. cousinssubs.com microsite to advertise Moo-la-palooza, a mooing contest in which guests can win $1,000 and free subs for a year.

“That’s a smart move; that’ll boost SEO, and they’re hosting it on their dotcom, which is cheaper than building an app on Facebook,” he said.

Following Facebook’s terms of service makes for tight restrictions on brands that want to host a contest or other application, and the network requires a minimum amount of advertising in any deal, Powills said.

Così will host a promotion later this fall on its brand website for those reasons, Stewart said, though it still would be important to encourage guests to move between the standard site and the brand’s social media pages.

“We tried to create a loop — from our site onto Facebook, then back to our site — and we want to cross-pollinate all our digital properties,” Stewart said. “If we’re not bringing them back to www.getcosi.com, and they found us on Facebook, what’s the point?”