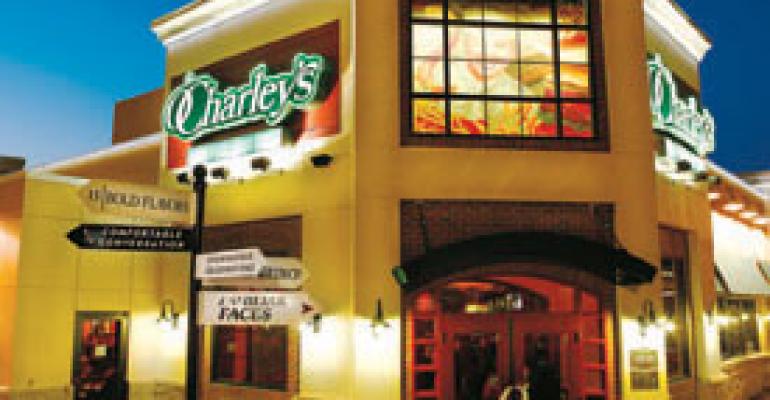 The belief that smaller is better is enjoying a spirited revival among several restaurant chains that have substantially reduced the size of their prototype buildings without diminishing—and in some cases while growing—average-unit volumes.

From 400 square feet squeezed out of the current store model of Rising Roll, an Atlanta-based fast-casual sandwich concept, to as much as 1,500 square feet eliminated from current prototypes of O’Charley’s, the Nashville, Tenn.-based casual-dining chain, brands big and small are investing in so-called “value engineering” to maintain their per-location sales volumes even as they shrink the size of their properties.

In particular, operators are figuring out why loyal guests are loyal and studying customer flow and access. In addition, they are using space-saving and time-saving kitchen equipment, trimming inches off of countertops and tabletops, building with materials that are less expensive but stronger than those used in earlier prototypes, and contracting with third-party design experts who specialize in maximizing commercial sales spaces.

Those and other practices are plugged into the value engineering equation, the goal of which is to produce a smaller footprint capable of doing as much if not more business than larger models, or at least converting so-called “dead space” into sales-generating square footage.

Not to be confused with the miniature units or express outlets many brands have created to fit into food courts at malls, colleges or airports, operators such as El Pollo Loco, O’Charley’s, Così, Rising Roll, Ritter’s Frozen Custard, Maui Wowi, Wingman’s Wings and Heidi’s Brooklyn Deli are unveiling smaller units for their Main Street locations.

Unlike Taco Bell’s bid 20 years ago to improve unit-level profitability through smaller, more high-efficiency kitchen technologies in an initiative dubbed “K-minus” that depended on commissary-prepared foods being rethermalized in less back-of-the-house space and with fewer workers, today’s smaller kitchens and more effectively designed dining rooms are byproducts of value engineering.

Jeff Warne, concept president for 240-unit O’Charley’s, said the company began reducing the size of its restaurants nearly two years ago when it realized it had too many tables for large parties when most transactions involved parties that averaged barely more than two people.

“We did an analysis of the distribution of the party size of our guest checks, and while there were times that we had 100 percent table utilization, only 60 [percent] to 70 percent of the seats were used,” he said. “So from this mismatch in guest configuration to seats occupied, we realized we needed more two-tops and four-tops and fewer tables for six to eight or more.”

Although O’Charley’s uses a mix of round, square and rectangular tables, it nonetheless was able to reduce the number of average unit seats from 271 to 183, reduce dining room space and cut out 1,500 square feet from its previous 6,900-square-foot footprint, to the current model at 5,400 square feet.

Warne said the reduction not only allowed the chain to maintain its average-unit volumes, but that in some cases unit sales grew.

He said the company does not disclose its outlets’ financial performances, but the NRN Top 100 census estimated that O’Charley’s average-unit sales increased 0.45 percent in 2006 to $2.7 million.

Meanwhile, in O’Charley’s kitchens, space savings were achieved by switching out various pieces of cooking equipment for versions that occupied less space but were even more productive. The company installed hi-tech, clamshell broilers to replace grills for cooking the chain’s popular steaks and converted to induction sautéing stations that didn’t require an open flame, Warne said.

“Tightening up the dining room space was how we were able to value engineer our smaller prototype,” says Mike Lassiter, president of the multiconcept company Franchising Concepts, franchisor of the 12-unit Rising Roll chain. Lassiter said that 35 Rising Roll stores are in development.

“We realized that we had a lot of dead space dealing with a long walkway customers used to reach the counter,” he said. “So we were able to knock out 400 square feet from our typical 2,400-square-foot prototype, maintain our average-unit volume and not reduce the throughput of the kitchen.”

Lassiter said that with a recession or a sharp economic downturn widely expected, going forward with a smaller prototype is a good way to keep franchisee growth moving because a smaller footprint may help secure better lease rates and higher-visibility locations.

Ritter’s Frozen Custard, a 51-unit chain based in Indianapolis, has significantly changed its signature motif. When it was founded 16 years ago, Ritter’s went to battle with circular buildings of 1,400 to 1,500 square feet, offering indoor seating and large patios.

The rounded shape—which 39 of the original units still have—was an architectural point of difference the chain used as a marketing statement. Today, the main prototype is, as president Bob Ritter put it, “a walkup and drive-thru kitchen,” coming in at about 900 square feet with no indoor dining.

“It just didn’t make sense to build units as large as we were,” Ritter said. “Some of our patios, you could have landed a helicopter on.”

With the entire building dedicated to a kitchen and no indoor seating, lease rates have dropped, Ritter said.

“Those kinds of unit economics might serve us very well in a recession,” he said.

For a few chains, adding menu items that can stimulate sales within the existing footprint, nonetheless reduces the percent of sales spent on occupancy costs, by turning underutilized space into sales-generating space.

D’Loren explained that even if a recession were not on the horizon, the company was already looking for ways to reduce the ice cream chains’ occupancy costs by diversifying the menu to generate more sales as a way to reduce the percentage of volume allocated to paying rent.

With 400 Marble Slabs and 200 MaggieMoo’s doing on average about $250,000 a year, D’Loren said the chain would use “dead space” near the counters of its typical 1,500- to 2,000-square-foot prototypes to add pretzels, hot and cold beverages, cookies, and muffins that could add as much as $100,000 to average-unit volumes.

“If we increase top-line revenues per unit by another $100,000 on the same footprint by adding these new products, we have just cut our occupancy costs by a third. That could make all the difference, especially with a recession supposedly coming.”

Whether a recession is looming or not, Mark Godward, president of Strategic Restaurant Engineers, a design firm specializing in foodservice environments that maximize sales from better-utilized facilities, said operators need to be thinking about value engineering no matter what the economy is doing.

“They should be thinking about right-sizing their operations even in the best of times,” he said. “It’s been happening for years and it’s really not new.

“But as concepts become older, get more conscientious about their real estate costs and know what makes their guests happy, there has to be an evaluation of the physical plant. Are we doing the best we can with our kitchen, the tables, the parking lot? It’s a healthy reality check by which to run a business.”