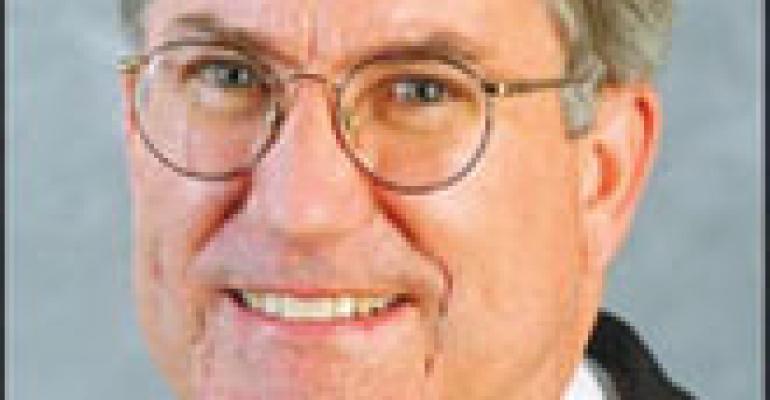 Even as the dreaded “R word”—recession—creeps into economic forecasts on the heels of last month’s negative reports citing declines in U.S. jobs, stifled consumer spending, still-shrinking home values and ever-tighter credit markets, many restaurant players are poised to ride out the predicted storm, say operators and industry watchers.

Through previously established pricing and refranchising strategies or credit facilities that were refinanced before turmoil hit the credit markets, many operators have taken steps to blunt the blow of an economic downturn. Given continued consumer dependence on meals away from home, observers project that industry sales will continue to grow, albeit at a slower pace.

“While economic indicators offer mixed signals, the foodservice industry is seeing continued growth, and it is expected to continue in the near future,” according to the International Foodservice Manufacturers Association and Technomic Inc., whose industry outlook for the year ahead was released Sept. 20.

As the industry’s first peek at predictions for 2008, the IFMA/Technomic Forecast & Outlook predicts that total foodservice sales will grow at an inflation-adjusted, or “real,” rate of 1.1 percent in 2008, compared with the projected growth rate of 1.3 percent, to $631.81 billion, for the current year.

The nominal, or unadjusted, sales increases for both years would be much higher because of inflation, which IFMA and Chicago-based Technomic peg as 4 percent for both 2007 and 2008.

If the forecast holds true, 2008 would be the fourth consecutive year of declining real-growth rates for the foodservice industry as a whole. The last year-to-year increase in the real-growth rate was in 2004, when foodservice notched a 2.3-percent annual jump, IFMA/Technomic data show.

Still, optimism for sales growth among operators remains solid. It is growth in profit, however, that operators are not convinced they will see, as higher commodity costs, labor expenses and fuel costs eat away at any minimal sales gains.

“If there is substantial weakness in the underlying economy, the restaurant industry will obviously face challenges,” said Hudson Riehle, senior vice president of research and information services for the National Restaurant Association. “But if you look at the latest recessionary period in 2001, it was the first time in history the restaurant industry did not post an annual negative real-growth rate during a recession, and that highlights how the industry has become much more essential to consumers’ lifestyles.”

Research shows that the industry typically holds up better than other sectors, and even better than the aggregate gross domestic product, during recessionary or near-recessionary times.

A report from investment bank Friedman, Billings, Ramsey & Co. Inc. said annual real sales fell year-over-year by 0.2 percent during the 1980 recession and by 1.1 percent in the 1991 recession. But during the recession of 2001, restaurant sales continued to grow at just under 2 percent, a lesser rate than in the prior year, but stronger than the negative rate for the gross domestic product.

Weak economic indicators have led pundits to say the U.S. economy could be on the brink of recession, as both the percentage of those employed and the rate of consumer spending have been dropping since December. Sales of new and existing homes are weak, and in some areas like California and Florida, are near all-time lows. Credit delinquencies are rising and some predict the fallout of the June sub-prime lending bust is not yet over. Further, in late September, oil futures rose to more than $80 a barrel, a price that could affect everything from gas prices to production costs.

The Federal Reserve cut interest rates by half a percentage point Sept. 18 to help spark both consumer borrowing and spending and to help rescue the financial markets. Still, many economists said there was no guarantee the U.S. economy would recover from its downturn. Pundits predictions for a recession have ranged from a “one in three” chance to “at least 40 percent” and “touch-and-go.”

Meanwhile, operators are taking steps to protect their interests if the economy slows further. At Tampa, Fla.-based Beef ‘O’ Brady’s, task forces have been developed to explore cost savings in purchasing and operations, menu changes to drive traffic, and pricing strategies that would least affect guests’ dining-out habits.

At Good Times Burgers & Frozen Custard, a quick-service chain based in Golden, Colo., menu prices already have been increased by about 8 percent so far this year to cover higher costs, and new value-centric sliders, sold for 75 cents each, were introduced this summer to get wallet-sensitive consumers through the door.

Larger operators like Dallas-based Brinker International Inc., which operates or franchises 1,790 restaurants under four brands including Chili’s, have slowed corporate-unit development and agreed to sell outlets to franchises to cut overhead as sales slide.

Companies as varied as CKE Restaurants Inc., parent of the Carl’s Jr. and Hardee’s brands; P.F. Chang’s China Bistro Inc.; and cafeteria operator Luby’s Inc. each took advantage of previously strong credit markets and refinanced debt facilities or tweaked lending arrangements prior to the credit crunch that could have crippled access to capital.

Hoback said that because quick-service chains typically offer more lower-priced menu items, they are less sensitive to periods of economic weakness, as has been the case with major players like McDonald’s, Jack in the Box and Sonic, all of which have boasted continued strong sales this summer even as economic indicators slipped. Hoback noted the importance of a “two-tier” menu and pricing approach, which allows chains to offer the higher-quality items consumers desire at prices that cover cost of goods, while also offering value or dollar menus so that more sensitive consumers still can choose to eat out.

Good Times’ new Bambino burgers are slider-sized, all-natural beef burgers sold individually for 75 cents, in three-packs for $2.25 and five-packs for $3.75. The product introduction has helped same-store sales in July and August increase by 13.8 percent in those months.

Casual-dining operators are slightly more worried that the slowdown many of their operations have experienced for about two years could only get worse, especially in an environment of higher commodity and labor costs that aren’t supported by higher sales.

“Looking forward, I’m still a bit pessimistic,” said Nick Vojnovic, president of Beef ‘O’ Brady’s Inc. “I don’t see anything in the next two quarters that would lead to this turning around quickly.”