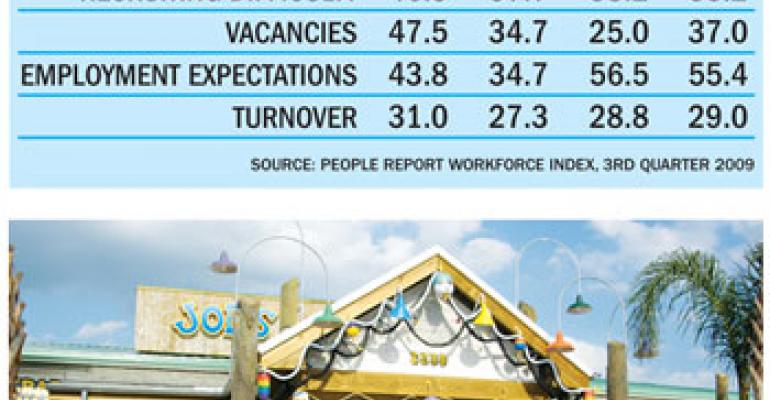 HOUSTON Joe’s Crab Shack plans to open several new stores in the coming months, breaking ranks with many other operators in the beleaguered casual-dining segment.

“We are very optimistic,” said Kevin Cottingim, senior vice president of human resources for the 113-unit, Houston-based chain. “We had a pretty good year compared to the industry.”

With operators such as Joe’s Crab Shack gearing up for more stores and raising their employment expectations, casual dining is beginning to show signs of a turnaround, according to third-quarter data from the People Report Workforce Index.

The Workforce Index measures operators’ personnel expectations in five areas: employment levels, recruiting difficulty, job vacancies, turnover and employment expectations, or expected increase or decrease in head count for hourly and salaried workers. A reading of 50 or more indicates strong growth or pressure to fill vacancies, recruit and increase staff. A reading below 50 means a decrease in growth.

Casual-dining trends were the big news for the quarter, said Michael Harms, a senior analyst at People Report.

“Casual dining was struggling long before anyone else, and maybe they will lead us out [of the recession],” Harms said.

Nineteen percent of casual-dining chains plan to add hourly workers in the third quarter while only 12 percent were planning staff reduction. Also, 24 percent of companies planned to add management hires and just 4 percent were preparing for layoffs.

The current economy is proving to be a good time for expansion with better real estate deals available and a deep labor pool to draw from, he said.

“We’re inundated with applications,” Cottingim said. “There are a lot of candidates out there, both employed and unemployed. Historically you would want someone who already has a job. But with all the closings that are happening, we’re not limiting ourselves to that. We’re looking as carefully at unemployed as well as employed candidates.”