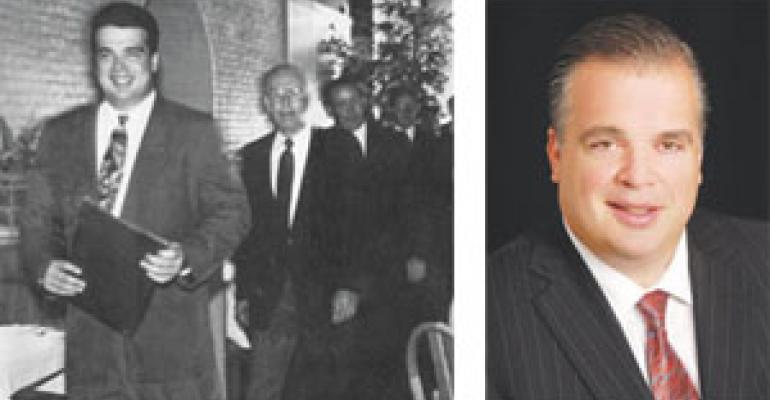 “Activist” is not a word many would use to describe Cameron Mitchell. But that’s the role in which the founder and president of his eponymous Columbus, Ohio-based restaurant group found himself a few years ago when a line cook at one of his restaurants was on the verge of being deported.

The cook “had been in the country for years and was just a good guy, worked hard, and here he was being locked up in front of his children,” says David Miller, executive vice president at Cameron Mitchell Restaurants. “Cameron organized this big protest, and we got him to be able to stay in the States.”

Such inventiveness and dedication helped the Columbus native grow his company from a single-unit operation in 1993 to one with $118 million in sales in 2007 and such concepts as the 19-unit Mitchell’s Fish Market and the three-unit Cameron’s Steakhouse.

Mitchell sold those restaurants to Ruth’s Chris Steak House in 2008 for $92 million, freeing him to concentrate on such fledgling concepts as Ocean Prime, his steakhouse and supper club, and the less formal Cap City Fine Diner and Bar.

“He always does it the right way—he never cuts corners,” says Michael Glimcher, chief executive of Columbus-based Glimcher Realty Trust, who is Mitchell’s landlord at three of his restaurants and a personal friend for the past 15 years. “He does what he says he’s going to do—every time.”

By his own admission, Mitchell’s reputation for thoroughness and resourcefulness is a far cry from his start in the business while a high school student at Columbus’ Upper Arlington High School working at a Max & Erma’s almost 30 years ago.

“I was working for beer money,” he recalls. “I was lazy and unmotivated, and had already been suspended for three days for being late to work.”

Then, says Mitchell, now 46, he had an epiphany of sorts during a shift change.

“I was an a.m. cook and a p.m. host,” he says. “It was pandemonium in the kitchen, and time froze as I looked across the line and realized that I wanted to do this for the rest of my life.”

Mitchell’s newfound dedication took him to The Culinary Institute of America in Hyde Park, N.Y., where he graduated with an associate degree in 1986. After rising to director of operations at 55 Restaurant Group, Mitchell branched out on his own by opening Cameron’s in northwest Columbus in 1993.

“Opening the first restaurant was big,” Mitchell says. “I always knew I just needed a start.”

In growing his company to 33 units before selling most of them to Ruth’s Chris, Mitchell developed what the company calls its “associates first” mentality. Contrary to the industry’s more common “guests first” mantra, Mitchell says he always believed that he needed to take care of his workers first in order to ensure the best guest experience. The organization now employs more than 2,000 people at the 17 company-owned restaurants and the 12 that the company manages.

“Cameron believes in the 99 percent of the good in people, not the 1 percent of the bad,” says Miller, 44, who started with Mitchell in 1996 as general manager of Cap City and estimates he’s built about 50 restaurants with Mitchell. “Numerous times, we’ve given second and third chances to people, and a lot of them end up being associates.

“If you have an important date or a concert you want to go to, we’re going to get you off that shift because at some important time, I’m going to ask that associate for a favor, and ‘yes’ has got to be the answer.”

Such dedication from his staff not only was key to boosting the company’s sales and unit count, but also allowed Mitchell to open a dozen different types of dining concepts. In addition to Ocean Prime and Cap City, which have check averages of about $80 and $20, respectively, Mitchell’s concepts range from Molly Woo’s Asian Bistro to Marcella’s Ristorante to M, one of just two Columbus restaurants to receive AAA’s four-diamond rating. Mitchell’s restaurants also span six states, from Arizona to Florida.

Mitchell notes that his success lies in his insatiable curiosity, inability to accept mediocrity or ‘no’ for an answer, and an aversion to opening cookie-cutter restaurants.

“I’m not sure I’d get excited about running restaurant number 64,” he says.

The deal with Ruth’s Chris allowed Mitchell to shave off about $30 million in debt while freeing him up to pursue new concepts and continue opening restaurants in a challenging economy. The company opened five restaurants in 2008 and will open three more this year. While some operators would call that pace ambitious, Mitchell calls it “cautious.”

“Restaurants go through a lot of a capital,” he says. “I’ve been on my own for 16 years, and I’ve never had enough capital. That’s the biggest challenge.”

Observers who thought the deal with Ruth’s Chris would slow Mitchell down were mistaken, Miller says.

“The perception on the outside was that Cameron was going to relax and step back, but he is more engaged and more passionate now than he has ever been,” he says. “He’s like a duck. He’s cool as a cucumber on top of the water, but underneath that mind is going a mile a minute.”

In addition to expanding his restaurant company, Mitchell is active in the CIA. In 2004, he gave the biggest gift the 63-year-old institution had ever received from a graduate by establishing a $250,000 scholarship fund. Last year, he was named the CIA’s 15th chairman of the board of trustees, becoming the first CIA graduate to hold the title.

“I fell in love with that school three days after I was up there,” Mitchell says. “[The CIA] gave me a good base of knowledge from which I could build my career.”

In addition to his work with the CIA, Mitchell and his wife, Molly, are active in raising money for Columbus’ Nationwide Children’s Hospital and cancer research while raising their three kids, ages 6, 8 and 11. All of that makes Mitchell a very busy man, though not too busy to step up for an associate or colleague.

“The guy probably has less free time than you can imagine, but he always has time for a friend,” says Glimcher, who socializes with Mitchell about once a month. “That’s a pretty good attribute.”