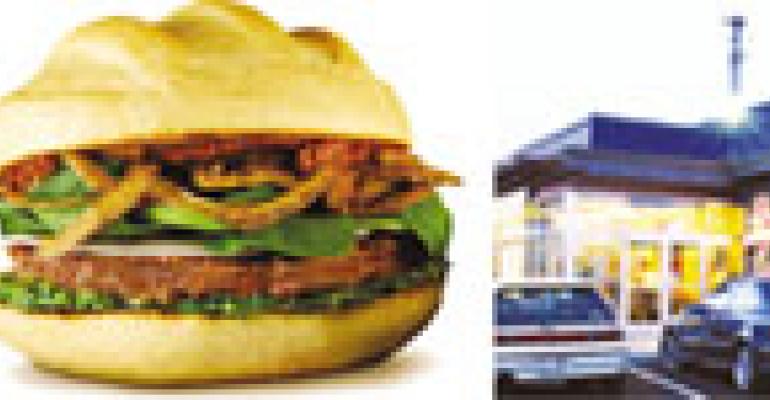 Local, seasonal ingredients are often thought to be the stuff of high-end independent restaurants. But don’t tell that to the executives at Burgerville.

The 40-unit, quick-service burger chain based in Vancouver, Wash., has been using local ingredients since it opened its first restaurant in 1961. Now it features Walla Walla onion rings in the summer, sweet potato fries in the fall and berry shakes starting in the spring.

Those items were introduced starting in the mid-1990s, and in 2009 the chain started offering monthly items featuring local, seasonal fare. The chain also uses 100-percent wind power, recycles its used grease into biodiesel and otherwise takes on a role of environmental stewardship.

But Burgerville isn’t jumping on the bandwagon with these initiatives. In many cases it’s the one doing the driving.

“In 2005 we were approached by Portland General Electric for their newly launched renewable energy program,” recalled Burgerville president Jeff Harvey.

The power company wanted Burgerville to buy a fraction of the electricity it used as wind power and pay a surcharge to account for the added cost of producing electricity from wind.

Instead, Burgerville insisted that not a fraction, but all of its energy come from wind power—something Portland GE was in no position to provide.

“We were basically buying a promise that the power company would install enough or more wind equipment so we could do that,” Harvey said, explaining that he thought new industries were needed in the region, and that clean energy seemed like a viable one to replace logging and other industries that were on the decline.

“Our investment has helped support the development of a new industry,” he said.

Harvey doesn’t claim any altruism on Burgerville’s part. He said all of the company’s moves toward sustainability and support of local producers are done to help make the company profitable.

In the case of converting its grease to biofuel, Burgerville used to have to pay people to haul away its used oil and grease, “to where we’re not sure,” he said. Then officials started talking to biofuel producers, and now they sell them their used grease.

“That has shifted from a cost to a revenue to us,” Harvey said.

Spending extra money on wind power fosters the development of a new industry that helps build prosperity in the communities where Burgerville operates, Harvey said. That means customers can spend more money on pumpkin milkshakes in the fall and tempura battered asparagus fries in the spring.

“I think it’s great that there’s a fast-food restaurant out there that is making an effort to use natural meats and locally grown and seasonal products,” said Lisa Schroeder, chef-owner of Mother’s Bistro & Bar, Mother’s Velvet Lounge & Café and Mama Mia Trattoria, all in Portland, Ore. “It’s certainly a step in the right direction. They’re redefining the fast-food model, and consumers connect with their value system.”

Sourcing locally is part of Burgerville’s DNA. Its parent company, The Holland Inc., started out in Vancouver, Wash., in 1922 as The Holland Creamery, relying on local dairy farmers for its business.

That means it’s not just the obvious seasonal products that are local. The chain’s syrups are from Seattle; the buns are from a baker in Portland, Ore.; the beef is from a cooperative of natural, sustainable producers. Not all of those ranchers are local, though they’re all in the western United States, but Harvey explained that sustainable trumps local at Burgerville.

Similarly, one of the chain’s signature items is fish and chips, made from halibut.

“There haven’t been halibut fisheries in Washington and Oregon for quite some time,” he said, so the fish comes from the waters off British Columbia and Alaska.

“We really like to tell people the story of our sourcing,” Harvey said, because even if not all of their ingredients meet all of their goals, their stories still underscore the company’s commitment to sustainability. For instance, when strawberry shakes are put on the menu in early April each year, the first loads of fruit come from California.

Jack Graves, Burgerville’s “chief cultural officer,” with responsibility for areas ranging from community outreach to customer service to local taxes, said using local produce for which the region is known is not always easy.

“Sometimes it’s a little disruptive,” he said. “But I think that’s what’s needed maybe in this economic environment. When we do asparagus spears in a quick-service environment and people ask how we do that, I say, ‘We do it very well.’”—[email protected]