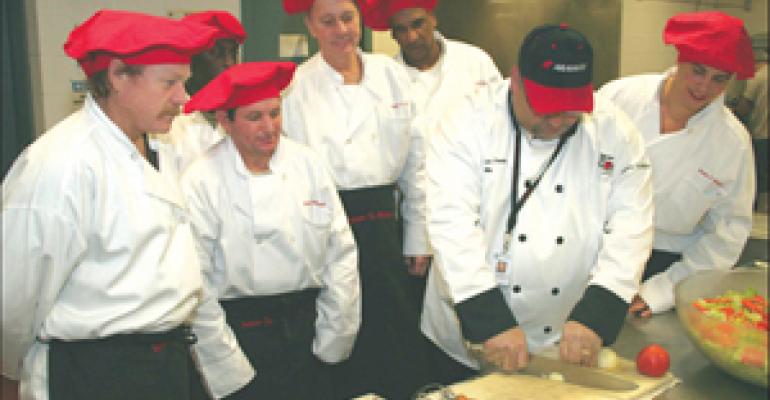 A culinary education program for prison inmates is not only helping Aramark win business at correctional facilities, but also could encourage graduates to pursue foodservice careers upon their release and positively affect recidivism rates, according to law enforcement officers and contract management executives.

The program, called Inmate to Workmate, was the brainchild of chairman and chief executive Joseph A. Neubauer in 1999, according to Tim Campbell, president of Philadelphia-based Aramark’s correctional facilities division. It was recently retooled to better accommodate the time constraints of inmates’ sentences, and an improved version was rolled out about a year ago to prisons in Philadelphia; Brevard County, Fla.; and Indiana. Today, the program is available at 33 correctional facilities.

Aramark offers the program as part of its requests for proposal when bidding on contracts. The majority of prison wardens see it as a value-added component within their facilities, Campbell said.

“Foodservice usually is not top of mind for the decision makers of these facilities,” he said. “We get a better share of their attention when we’re talking about things that are more meaningful to them. The low bid doesn’t necessarily win the day anymore. We’re seeing far more [requests for proposal] about the value a partner can bring to an institution, and while this kind of value can involve additional costs, it also can help grow the business by getting the attention of these clients. We’ve more than quadrupled our business.”

The program consists of a three-month classroom and kitchen curriculum, which includes a six-week focus on basic ServSafe food-safety training that is sanctioned by the . It is taught by Aramark employees working at the correctional facilities and by guest chefs who are employed at other accounts operated by the company. Inmate to Workmate is offered at municipal and maximum-security prisons, and all participants must be non-violent offenders. The classes can accommodate between 70 and 100 inmates. Participants are split up into groups of as many as 14 for manageability. Even though the inmates are taught cutting techniques, there is a high-security quotient applied to the handling of knives and other tools that could be used as weapons.

“We try to keep classes manageable, and there is a small teacher to student ratio,” Campbell said. “Everything is different in this environment. They do use spatulas and knives, but they’re blunt knives and they’re tethered. Also, inmates do not leave the kitchen until all tools are accounted for, and there are pat-downs if anything is missing.”

Upon graduation from the program, inmates receive certification and are eligible to apply for back-of-the-house positions at restaurants when they leave prison. Companies that hire them are eligible to receive a Work Opportunity Tax Credit from the government.

“It depends on the community, but there are a number of them where there are tax credits for hiring formerly incarcerated people,” Campbell said. “It’s something [Aramark] is working on in Washington, D.C., trying to drive some legislation that would make it more widespread.”

Dave Donahue, commissioner of the Indiana Department of Correction, which operates 32 facilities and nine parole offices, said Inmate to Workmate was rolled out to the prison system last July when it began outsourcing its foodservice operations to Aramark. He said recidivism rates in the state range around 40 percent. The goal is to lower that figure through a number of educational programs now being offered to inmates.

“In Indiana’s Department of Correction, four out of 10 inmates will fail within three years of their release,” Donahue said. “Right now we’re averaging between 45 and 50 people being released from our system a day.… This program is a good way to promote the chance of an opportunity to work in the foodservice business and perhaps the potential of becoming an Aramark employee in the future. If they have gainful employment opportunities, maybe there won’t be new victims, new crimes, and these people won’t be returning to the [system].”

Aramark’s Campbell said the company already has hired some of the graduates of the Inmate to Workmate program, but that they are hired only to work at B&I accounts and in the sports and entertainment division, not in schools or healthcare foodservice.

At Brevard County Jail in Florida, Aramark district manager Dave Manganelli said the program, in addition to teaching inmates about food safety and culinary practices, also instructs them on how to run a foodservice operation.

“Not only do they learn about safe food handling, food prep and personal hygiene, they also get an understanding of customer service and how to create repeat business through customer loyalty,” he said. “And in addition to receiving an opportunity to learn about menu planning and putting together recipes, they also get to look at the [process] associated with putting the meal out as well as the presentation.”

In Indiana, Donahue said inmates also help with catering, preparing meals for the local Meals on Wheels program, which feeds the homebound elderly, and for special events organized by area businesses. They receive minimal payment for their work.

“The inmates are available to receive some remuneration, starting at around 12 cents an hour,” he said. “At the end of the day it doesn’t mirror free-world compensation, but it is a token for them to receive something for the work they do.”

Campbell said the catering is done at correctional facilities because “it costs less without impacting quality” and that sometimes the food quality consists of “relatively sophisticated” fare. But ultimately, he noted, there really is no “wink-wink, nudge-nudge secret benefit to Aramark. The faster we can put released inmates to work, the less likely they will be to return to jail. We want to grow our business, but also give back to the community in meaningful ways.”