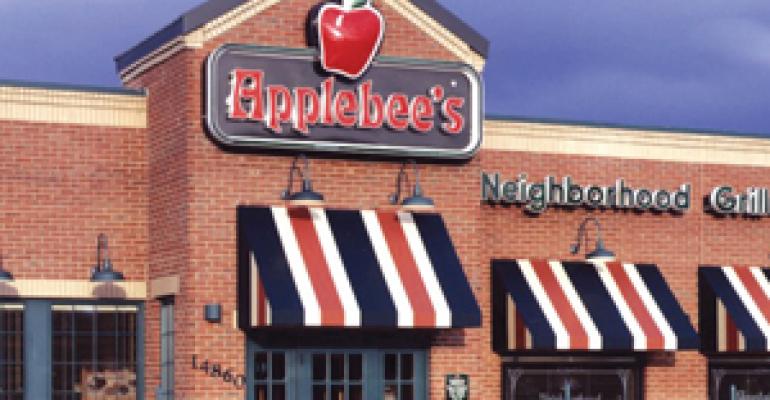 OVERLAND PARK KAN. Applebee’s International Inc. as the casual-dinnerhouse giant, looking to improve its flagging fortunes, this month began studying strategic alternatives that it said could include a sale of the corporation or a large recapitalization. —All eyes are on

While analysts and industry veterans digested the development, which was not entirely unexpected, many discounted the likelihood of an outright sale of the company. Instead, they said Applebee’s could be expected to embark on a financial restructuring like those recently undertaken by several other large restaurant operators, including Brinker International Inc., Rare Hospitality International Inc., Domino’s Pizza Inc., CBRL Group Inc. and McDonald’s Corp. Through large share repurchases and recapitalizations, those companies sought either renewed access to capital through a more leveraged balance sheet or future improved per-share earnings from fewer outstanding shares—two results that typically please investors. —All eyes are on

Applebee’s actions may be no different, some analysts contend, especially as it shoulders pressure from activist investor Breeden Partners LP, a 5-percent stake-holder that has been pushing the company to create more shareholder value since last fall. —All eyes are on

Yet Applebee’s alternatives—which it said in proxy materials include a range of possibilities from “additional leverage to a more aggressive stock buy-back plan, to taking the company private in a leveraged buyout, to the sale of Applebee’s to another company”—may not help its turnaround efforts, some analysts said. —All eyes are on

“We think the scenarios would occur only to satisfy financial engineers or activists,” analyst John Ivankoe at J.P. Morgan Securities Inc. in New York said in a research note. “We don’t think Applebee’s would be a better-run company or brand.” —All eyes are on

An industry analyst at a boutique investment bank who asked not to be identified also said Applebee’s could be worse for wear should it bow to investor pressure and leverage its balance sheet too highly in pursuit of shareholder returns. He warned Applebee’s not to follow the path of family-dining chain Shoney’s, once a 900-plus-unit concept that took on too much debt and made moves that siphoned cash away from menu development, operational upgrades and unit remodeling. Shoney’s, on the brink of bankruptcy in early 2002, eventually was acquired through a private-equity-led, going-private transaction in which shareholders received 36 cents per share. The company’s stock traded in the $26 range during its heyday in the early 1990s. —All eyes are on

The analyst said the possibility of a private-equity deal for Applebee’s should not be overlooked. “I would not underestimate the willingness of private-equity groups to buy this company,” the analyst said in an interview. “It would take a $700 million to $800 million check … but it could be done. The fact is, [Applebee’s] is depressed, and that is the opportunity.” —All eyes are on

Private-equity firms have demonstrated their willingness to pay billion-dollar prices for foodservice players. OSI Restaurant Partners Inc., the operator or franchisor of 1,422 casual-dining restaurants, is expected to go private as early as next month in a management-led and private-equity-sponsored buyout valued at about $3.63 billion. Contractor Aramark Corp. was acquired earlier this year for about $8.3 billion by a management-led group that included five private-equity investors. In 2005, three private-equity groups acquired Dunkin’ Brands for $2.43 billion. —All eyes are on

Though private-equity buyers could emerge, analysts across the board said a buyout by another restaurant company was out of the question mainly due to Applebee’s size, maturity and possible billion-dollar price tag. Most analysts did contend that after its review Applebee’s would undertake some sort of recapitalization. —All eyes are on

“Most likely, the outcome here is a Dutch auction tender, where they take on new debt and buy back a large amount of shares,” securities analyst Ashley Woodruff at Friedman, Billings, Ramsey & Co. Inc. in New York said in an interview. —All eyes are on

Woodruff said a full sale of the company would not make much financial sense to shareholders or to possible buyers, as the company’s stock price has been trading at about 10 times its projected fiscal 2007 earnings before interest, tax, deprecation and amortization, or EBITDA. That’s on the high side of the valuations of recently acquired restaurant companies, which have been between nine and 10 times EBITDA, she noted. —All eyes are on

In a sale, shareholders “won’t get much upside from where the stock is now,” Woodruff said. —All eyes are on

Overland Park, Kan.-based Applebee’s operates or franchises 1,942 namesake units worldwide, making it the industry’s largest casual-dining brand, and posts annual systemwide sales of $4.7 billion. One analyst pegged its enterprise value at $2.28 billion, which includes the value of 200 owned real estate assets and the franchised system’s royalty income. —All eyes are on

After accounting for about $156 million of debt, Applebee’s per-share equity value is $28.68, according to research from analyst Bryan Elliott at Raymond James & Associates in Atlanta. Just before announcing the formation of a committee to explore alternatives, Applebee’s stock closed at $24.23 per share Feb. 12. —All eyes are on

Applebee’s stated in a filing with federal regulators that the company is “committed to a thoughtful and thorough examination of our options to ensure we come to a good decision.” It did not offer a timetable for future announcements related to the company’s review and declined further comment for this article. The company said its exploration of alternatives does not guarantee that a transaction would occur. —All eyes are on

Applebee’s did say, however, that the board’s review does not change the chain’s plans for the current fiscal year. “We are full-steam ahead on our 2007 plans,” Applebee’s said. “It is critical that we stay focused and deliver on our commitments to improve traffic and sales in 2007.” —All eyes are on

Applebee’s has struggled to recover the stride that made it a top performer through much of the 1990s and into this decade. More recently, it has tried unsuccessfully to pull out of a sales slowdown that began three years ago. Systemwide domestic same-store sales declined 0.6 percent for fiscal 2006, and corporate-unit same-store sales have been negative in 10 of the past 13 months. —All eyes are on

The company has tried to gain traction by offering value-oriented, three-item combo deals for $9.99 and enlisting celebrity chef Tyler Florence to develop new entrées and pitch them on TV. Applebee’s also hired a new chief marketing officer, George Williams, who is charged with developing new advertising campaigns and leading menu direction. —All eyes are on

“Whether we are sold or not sold, public or private, recap or no recap, we must stay focused on executing our operational plan and we must deliver results,” Applebee’s stated in its proxy materials. —All eyes are on

The company’s weak performance made it a target of hedge fund Breeden Partners, which disclosed its 5-percent-plus stake in the company last October, and called for Applebee’s to improve shareholder returns through refranchising, cuts in spending and the sale or sale-leaseback of real estate assets. —All eyes are on

After Applebee’s agreed to begin exploring alternatives, Breeden said it was “pleased that the board has recognized the need to do something in the face of a failed strategy and prolonged deterioration in operating fundamentals.” —All eyes are on

The Greenwich, Conn.-based fund, founded by former Securities and Exchange Commission chairman Richard C. Breeden, also said it hoped Applebee’s would not make any decisions until a new board “with real independence and fresh thinking” is in place. —All eyes are on

Breeden is set to nominate four executives to Applebee’s 12-member board at the company’s annual shareholder meeting in May. —All eyes are on

Zane Tankel, a franchisee who operates more than 25 units, said Applebee’s board of directors undertook the review simply as a matter of “prudent business.” —All eyes are on

“It’s business as usual here,” he said. “We have every confidence in the present management team. … They are second to none by miles, and they are prudently doing what needs to be done.” —All eyes are on