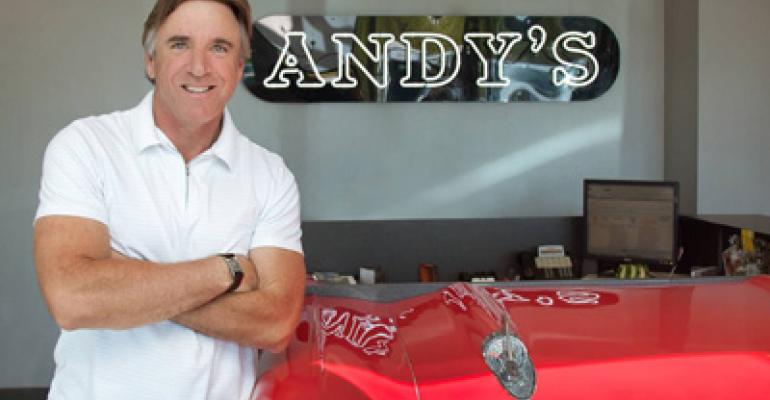 Kenny Moore, founder and president of Andy’s Burgers Shakes & Fries, admitted it was “a little crazy” to rename his 21-year-old brand Highway 55 just as the 100-unit chain embarks on an aggressive growth push calling for the addition of 275 locations over the next decade or so.

But the fast-casual “better burger” chain was forced to rebrand out of necessity, as it faced potential legal battles with other franchise concepts trading under the Andy’s name in markets where it plans to enter over the next decade, including Virginia, Florida and South Carolina. Rather than engage in lawsuits and Andy’s-to-Andy’s combat, Moore changed the brand name to Highway 55 on Feb. 24.

The Mount Olive, N.C.-based company now begins the job of converting its 100 existing units in North Carolina — which entails new signage and packaging — and getting new Highway 55 units open with franchisees simultaneously. Moore said the chain’s operator partners knew for about a year that a rebrand would be necessary and are on board with investing in conversions and new signage.

“About 50 locations are company-owned, and I have to put my money where my mouth is, too, so it makes it a less bitter pill for franchisees to swallow,” Moore said. “But they’re excited about the new name and look at it as a fresh start. I’ve had no negative feedback on the rebranding.”

Moore has yet to see how difficult it might be to grow a restaurant chain with an established menu and service style but a name even its fans don’t recognize yet. But he is not worried about the lack of name recognition, either in its home market of North Carolina or in new territories like South Carolina, Florida and Virginia.

Even the western part of North Carolina was an underpenetrated market where Andy’s did not have a following before franchisees opened two units a couple of years ago. Those locations are now two of the highest-grossing restaurants in the brand’s system, Moore said.

“The name of the brand isn’t irrelevant, but it’s less important to our success than our food, our products and our people,” he said. “What’s important for us to tell potential franchisees is that we’re a 21-year-old concept, we just have a different name. All the operations systems they’re looking at have 21 years of experience behind them. And there’s a strong culture here, and that’s not going to change.”

Highway 55 is not planning any major changes to the legacy menu from Andy’s, and in fact the brand’s signature burger still will be called the Andy’s Burger, he said.

The conversion of locations from Andy’s to Highway 55 will start on April 1, and is projected to finish by year’s end, Moore said. As rebrands finish market by market, the company would increase local-store marketing to inform customers that the newly named chain is still the one they have visited for years, he said.

“We’re not in the position to change all these signs and locations overnight, because I generally use one sign guy here in North Carolina, who’ll be pretty busy over the better part of nine months,” he said. “We’ll go county by county, and as we go we’ll hit the local papers hard to let people know Highway 55 is still your Andy’s.”

Highway 55’s area development deals for 275 total units call for several openings a year for the foreseeable future, Moore said. Two 50-unit developers have seven years to build out their territories, while the 75-unit agreement has a 10-year window and the 100-unit deal has a 12-year timetable.

While Highway 55 has not seen a robust recovery in franchise lending, the chain is confident that its locations will open on time because its new franchisees have the necessary liquidity and the right fit culturally to succeed in the Highway 55 system.

“These individuals have money and are looking for a good return on investment, with the stock market being volatile and banks giving them nothing for CDs,” Moore said. “But there are third-party dollars loosening up and other creative ways to find funding.

“It’s similar to when I started in 1991,” he said. “There are tremendous deals to be had in strip centers and pieces of land that have sat empty for a while, and those landlords are willing to put a few dollars up front to get them rented.”