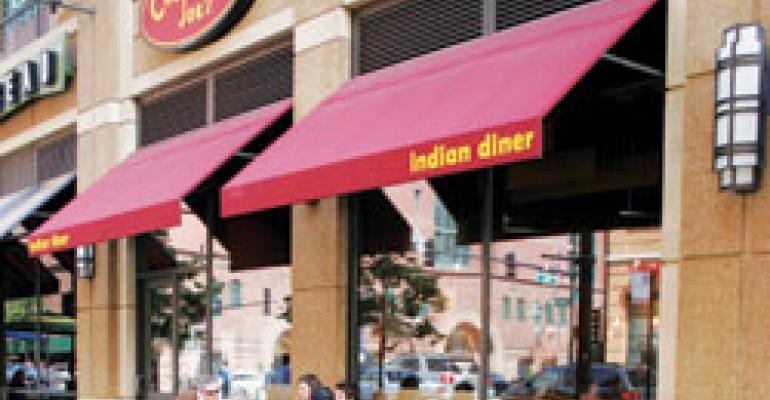 Vijay Puniani invested $500,000 of his own money and several years of sleepless nights developing Chutney Joe’s, his fast-casual Indian restaurant in Chicago’s South Loop. The eight-month-old concept, which has rapidly carved out its own niche, does brisk sales of about $17,000 a week, even with a Panera Bread next door and several chains nearby.

Recognized last month in Business Week’s “America’s Most Promising Startups” feature, Chutney Joe’s has been a labor of love for Puniani, and he enjoys walking around the dining room speaking with customers. But these days he’s also focusing on how he can spend less time in the restaurant and more time fielding franchise inquiries and scouting real estate sites for other corporate locations.

“The need for me to be here at all times was taken care of before we opened our doors,” Puniani says. “We spent considerable time and money developing a well-defined system based on the premise that, when you scale it up, everything is made consistently all the time.”

Standardized systems for operations, purchasing and food preparation long have been a major advantage that chain brands have over their independent competitors.

But many entrepreneurs are finding that operating like the chain gang can be the key to beating it and, more importantly, that just because they’re independently owned doesn’t mean they’re on their own. By networking with other operators and consultants in workshops or cooperatives, restaurateurs are able to learn best practices for prospering in a chain-dominated foodservice industry.

Industry consultant David Scott Peters, who hosts workshops for independent restaurateurs and brings them together in networking groups on his website, www.TheRestaurantExpert.com, says entrepreneurs who start a business without clear plans for operating it just end up “buying themselves a job.” His central reason for implementing systems is that they allow restaurateurs to work on their businesses, not in them.

“When you start off, you’re operating everything yourself,” Peters says. “You’re flipping the burgers, ordering the ingredients, and doing the hiring and firing. The biggest thing you have to do is train people to do it your way.… That’s the power of systems. It’s making sure things get done the way you’d do it, when you’re not there.”

His most important suggestion to independents is that they develop basic budgets and recipe-costing cards, which calculate food cost for each menu item.

“Chains have budgets and know the target costs of goods sold and labor costs,” Peters says. “The power of putting it together like the chains do is to ensure that you plan to be profitable. If you don’t know what your products cost, then you’re throwing profitability to dumb luck. We use the cards to do an item-by-item sales mix report. Based on what guests purchase, we can see where we need to reduce portion sizes or buy different product.”

Restaurateurs might have been able to “wing it” during a good economy, but operating efficiently has become essential as sales dry up in the recession, says Chuck Couture, a client of Peters and owner of Buster’s Rivers Edge in Thompson, Conn.

“Three or four years ago, I had a lot more sales but didn’t have systems in place, and I wasted a lot of money,” Couture says. “Now I’m trying to figure out ways [to compete] with big-box stores and $5 subs and things I can’t do.”

By implementing tips he learned from Peters at a workshop and from fellow operators on a message board, Couture slashed his total food cost from 38 percent to 21 percent. Buster’s, which is located close to Applebee’s and Ninety Nine Restaurant outlets, opened in 2004 and generates between $775,000 and $900,000 in annual sales, Couture says.

“You might not like to fill out your prep sheet every day,” he says, “but if you don’t, you won’t have a good result. That’s how I’ve been fighting this economy. If I don’t have a labor budget in front of me, I freak out now. It’s been a huge turnaround in my numbers. With less sales I’m making more money than last year.”

One of the most essential ways to drive traffic, Peters adds, is through engaged customer service. He cites research that claims the overwhelming majority of people who stop patronizing a restaurant do so because the restaurant staff either gave poor service or showed an attitude of indifference.

Another client of Peters’, Mike Stepto, credits techniques he picked up from seminars and message boards for helping him train employees at his restaurant, Stepto’s Bar-B-Q Shack in Evansville, Ind. By aggressively cross-training—such as training cooks and dishwashers to do both jobs—he has cut down labor costs in his 5-year-old, 100-seat restaurant.

“They seem to be a lot happier, and people understand what their job is,” Stepto says. “We’re taking away the ‘I don’t know’ [excuse], and if you don’t care, then we can replace you.”

Stepto always finds other operators on Peters’ message boards willing to help him solve problems. The group to which he belongs consists of 20 restaurateurs from all over the country.

“We always felt alone before joining the group,” Stepto says. “Now I get 20 answers to every question. Especially in today’s economy, I’m asking how to get more people in my doors when they’re not spending their dollars. You throw out an idea on a posting board, and you get all these ideas.”

Stepto recently has taken his colleagues’ advice and held several fundraisers for the 15 churches and eight schools within a mile of his restaurant. Stepto’s eatery is on pace to do about $950,000 in annual sales.

Other groups pull independent operators together from a much closer proximity. Area cooperatives might include competitors from the same neighborhood, but members often band together to network and thrive against out-of-town chains, says Douglas Katz, president of Cleveland Independents and chef-owner of Fire Food and Drink in Cleveland.

“Cleveland Independents motivates me to make my business better,” Katz says. “It’s a really focused group, and I think the community has stood behind us. I hear daily how people think it’s so important for us to do this.”

Of course, the 80 members of Cleveland Independents also leverage the power of collective purchasing and marketing. Wine purveyors have sold product wholesale to the group at competitive rates, Katz says, and the group has rolled out The Deck, a collection of 52 $10 gift cards redeemable at member restaurants. The popular promotion provides customers a $520 value for $30.

Katz’s 120-seat restaurant averages weekly sales of about $45,000 on an average check of about $50 at dinner, including alcohol and dessert.

“On your own, you’re lackadaisical,” Katz says. “But when you’re communicating with other independents, you can get a great idea from this guy and that guy. With chains, you see all these dollars leave the city, but people see the value of supporting members of the community.”

The best way to earn community support is to support the community, says Jeffrey Sloan, co-owner of Punk’s Backyard Grill in Annapolis, Md. Even before the fast-casual restaurant opened last February, Punk’s management team met with the Annapolis & Anne Arundel County Conference & Visitors Bureau and the local Chamber of Commerce to get involved.

“We serve local food,” Sloan says. “It was clear to us that we needed to be a local restaurant, so it was critical that we be a part of the community and get plugged in right away. Before we opened, we sat with the CVB and said, ‘We want to be responsible, involved members of this community.’”

Since then Punk’s has sponsored the local YWCA, Boys and Girls Club, and private schools. Meeting customers through that involvement has reinforced the owners’ goal of getting to know their guests by name when they’re in the dining room, which connects with customers in a way most chains don’t, Sloan says.

“There are some benefits you get by not being a chain,” he says. “We are very quick to respond here.”

For instance, Punk’s opened with sluggish wine sales. Guests remarked that the Australian Shiraz offered was a little too complicated, so the management team replaced the wine within a week.

“We didn’t have to go to some corporate headquarters and explain it,” Sloan says. “We saw consumer unfamiliarity, and in four days we reformulated the wine program to dramatic improvements. Being that nimble, we can have the flexibility to do things quickly, especially in these times.”

Even though Punk’s competes directly with adjacent units of Noodles and Co., Potbelly, and McCormick & Schmick’s on its side of the Westfield Mall in Annapolis—in addition to the dozens of eateries in the food court—Sloan says Punk’s holds its own. He expects to ring up annual sales of about $1 million on an average check of $12 to $14.

“You’re doing more than selling food,” Sloan says. “You have to understand your community and make sure that you are a part of it. It’s more rewarding for you and your consumers. You’re not selling strange people a strange product.”— [email protected]