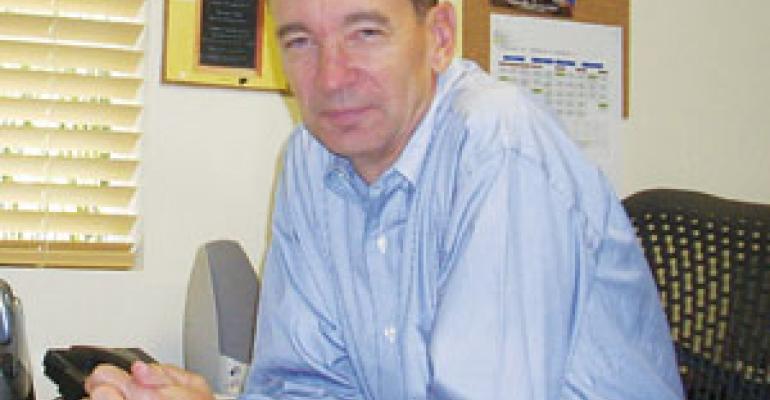 First Watch Restaurants Inc., the 76-unit daytime-cafe chain based in Bradenton on Florida’s west coast, is a reflection of its chief executive and president: understated, but friendly. No gimmicks, but very efficient. No glittery marketing or glib slogans, just pleasant, earth-toned decor and a straight-shooting, predictable product.

“My style is direct, honest and fair,” Pendery says. “What you see is what you get.”

Although Pendery shies from the spotlight, the 55-year-old father of two spent an hour recently chatting about his career as a co-founder of privately owned First Watch, which traces its roots to 1983 in Pacific Grove, Calif. The chain’s 76 stores, located in 11 states, serve up eggs, pancakes, soups, salads, fresh-fruit crêpes, and egg white and vegetable omelets from 7 a.m. to 2:30 p.m.

Ken Cruley, First Watch’s chief financial officer who has worked with Pendery for 13 years, puts it simply: “He’s not flash.”

Pendery is a Cincinnati native who grew up outside that Ohio city in northern Kentucky, where he followed the Cincinnati Reds. The Reds’ spring training camp is in Sarasota, Fla., where Pendery lives, so he still is able to catch his hometown team during preseason baseball.

Pendery attended the University of Indiana for five years, leaving in his senior year in 1976 before graduating. He says he still regrets that decision and not receiving his finance degree.

After his college days Pendery worked as a regional director for Cork ‘N Cleaver, a Southwestern-theme casual-dining chain specializing in steak and seafood. He also worked for Le Peep, a Denver-based chain also specializing in breakfast and lunch, before launching First Watch.

During his stint at Cork ‘N Cleaver, Pendery met his wife of 28 years, Jennifer. They have two children, Trey, who just graduated from Williams College, a liberal-arts college in western Massachusetts; and Libby, a junior at Hamilton College in upstate New York.

Pendery’s low-key, steady manner has helped privately held First Watch grow annual sales to $72 million in 2007. Projected sales for 2008 are $79 million. Pendery notes that the company has achieved 24 consecutive years of same-store sales increases. Of the chain’s 76 stores, 69 are company-owned, three are franchised and four are licensed.

First Watch, which currently has restaurants in 11 states, has ambitious expansion plans to sell franchise deals in 24 additional states.

Pendery may come off as an easy-going egg-flipper who drives a Chevy Tahoe, but Cruley notes that Pendery has a “keen eye for emerging trends.”

For example, Cruley says, the restaurant chain had a no-smoking policy before it was required in many states and had added such healthful items as turkey burgers, fruit parfaits and organic yogurt to menus before they became commonplace.

Pendery is also big on standards, such as First Watch’s Five Steps of Service, and the Ten Commandments, Pendery-style. Those rules are institutionalized in laminated, wallet-sized folding cards that also include the chain’s mission, promise and basics.

Among the Ten Commandments are greeting the customer at the front door within a minute, never running out of any menu item, re-setting tables within four and a half minutes, delivering food within 10 minutes, completing the commandments with a smile and pleasant attitude, and saying goodbye to every customer.

Meanwhile, First Watch’s Five Steps of Service include greeting the table, asking for the order, delivering beverages and food quickly when it’s hot, checking back for complete satisfaction after one or two bites, and dropping the check about halfway through the meal.

Even the operating hours are standardized in every First Watch location.

Troy DeBord, managing director of UBS Financial Services in Cincinnati, has known Pendery since 1980 and marvels at the consistency of First Watch’s food—even over time.

“The change that does occur is minor,” DeBord says. “It’s not wholesale. It’s not trendy. His format has stayed true.”

Although Pendery is First Watch’s top executive, he doesn’t like drawing attention to himself, said Chris Tomasso, the company’s chief marketing officer.

Outside of the office, Pendery is a golfer who also enjoys baseball. Even though he grew up a Reds fan, Pendery also follows the Pittsburgh Pirates, who train in nearby Bradenton.

Over time Pendery has become friends with two former Pirates managers, Gene Lamont and Jim Leyland. He says he especially liked Leyland, who is currently manager of the Detroit Tigers, because he likened Leyland’s management style to his.

“I’ve never seen him lose his cool,” Pendery says. “He gives immediate feedback. That’s what we do here. We don’t talk around each other here.”

Baseball also makes for a generational tie between Pendery and his son, Trey, who played college baseball at Williams. For Father’s Day, Pendery received a purple and yellow Williams College baseball jersey from Trey, who recently graduated.

And in 2004 when Trey graduated from Out-of-Door Academy in Sarasota, Fla., he gave a game baseball from his last high school baseball game to his dad. Pendery has that baseball sitting in his tidy First Watch office.

He served as a trustee of Out-of-Door Academy, an independent K-12 school that was started in 1924, for 13 years. Two of those years he was chairman.

When not in the Sarasota-Bradenton area, Pendery vacations with his family in Michigan’s Upper Peninsula, visits his son and daughter, and skies on slopes out West.

Pendery says that his father is turning 77 and still works as a manufacturing representative in the machine tool business.

That work ethic runs in the family, he says.

“I come from a working family,” Pendery says. “The standard is to keep on working. I’m happy. I’m healthy. I like to work.”