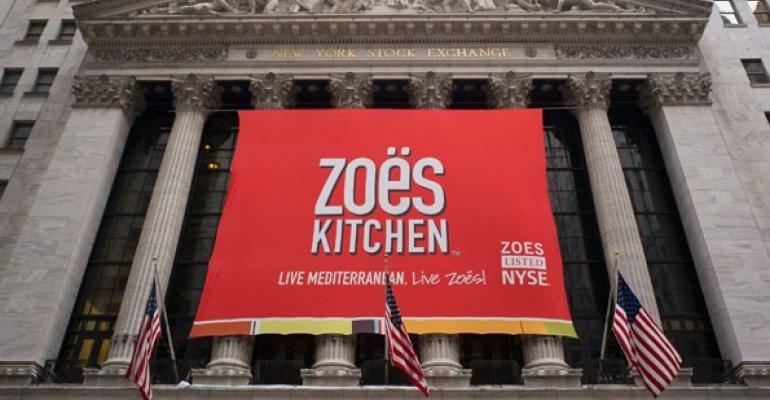 The company&#39;s stock rose 65 percent on opening day and continues to rise.

Zoe’s Kitchen Inc. intends to use proceeds of its successful initial public offering to open 20 to 30 new restaurants this year and fund further expansion, executives said.

The 114-unit Plano, Texas-based operator of the fast-casual Zoës Kitchen chain saw its stock rise about 65 percent during its New York Stock Exchange debut on Friday amid a turbulent week on Wall Street.

The public market was set to have 16 IPOs during the week, but only 10 were completed, Nasdaq reported. Six of those 10 ended the week below their issue price. However, with the first restaurant IPO of 2014, Zoe’s Kitchen’s shares rose 64.8 percent on Friday, to $24.72 from $15, and continued its gains Monday with shares around $26.

Zoe’s chief executive Kevin Miles said in an interview Friday afternoon that while the market was generally uneasy, his executive team “had no angst.” He noted, “This is for long-term growth for us. It’s all about delivering long-term.”

Jason Morgan, Zoe’s chief financial officer, said the $70 million offering with a 15-percent green sheet would allow Zoe’s to use the proceeds to pay off 100 percent of the company’s senior bank debt and leave about $30 million in cash on the balance sheet. “That will fuel our unit growth over the next several years,” Morgan said. “It allows us to essentially be self-funding and not requiring any additional capital.”

Miles said Zoe’s growth this year will allow the company to add restaurants in existing markets. Currently, there are Zoës Kitchen units in 15 states.

The company has real estate for this year in the pipeline and much into 2015, according to Miles. “We’re always looking for the A-plus site in the A-plus trade area,” he said. “You’ll see us do a couple of freestanding [restaurants]. We did a free-stander, a retro-fit of a Carl’s Jr., in Richardson [Texas], and you’ll see us do some of those when we have the opportunity.”

Morgan noted that investors seemed to like the chain’s positioning in the fast-casual segment and with a Mediterranean-inspired menu. “We are such a differentiated product in the terms of the food we are selling and in terms of the brand and the culture of the company that it really resonates with investors and resonates with customers,” Morgan said.

In addition, Miles also pointed to the chain’s health-oriented menu. “The customer is finding Zoe’s because we are that better-for-you option,” he said. “The Mediterranean menu and philosophy of fresh vegetables that we hand-wash and cut in our restaurants every day, to lean proteins and olive oil versus other fats, grilling and baking versus frying and microwave. I think the customer is really looking for that.”

Miles said the company is looking at some menu innovations, most targeted for 2015. Zoës Kitchen added quinoa to the menu in 2013, he added, and “it has moved up in the salad category.”

Chicken kabobs are the restaurant’s No. 1 seller, and steak kabobs are No. 2, he added.

“A lot of the other fast-casual guys are getting into catering or trying to replicate what we are doing,” Morgan added. “What’s interesting about our business is that 17 percent [of our work] is typically done in the morning. Our cooks show up at 7 or 7:30 [a.m.] to prep fresh food for the day, and they are assembling the catering. The catering typically goes out the door by 11:30 each morning, so essentially we have that 17 percent in the restaurant before the first customer shows up. Catering is our breakfast daypart.”

Zoe’s Kitchen was founded in 1995 by Zoë and Marcus Cassimus in Birmingham, Ala., and in 2007, private-equity firm Brentwood Associates took a primary stake in the company.