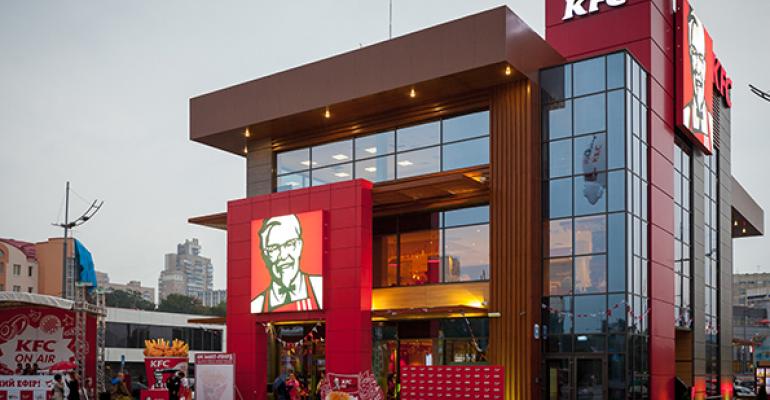 Deal with franchisees will give company control over chain&rsquo;s domestic marketing

Yum! Brands Inc. will invest $185 million in KFC in the U.S. in a deal with franchisees that will give the Louisville, Ky.-based franchisor control over domestic marketing, the company said Wednesday.

The deal comes as KFC in the U.S. continues its comeback from years-long sales weakness. The quick-service chain’s domestic same-store sales rose 7 percent in the first quarter ended March 21.

Yum CEO Greg Creed attributed much of the sales performance to KFC’s $5 Fill-Up Box, which offers a choice of items, plus side dishes and a drink, for $5. The item has given the company an entry-level price point to lure everyday consumers.

“We launched this $5 box and we’ve stayed on this $5 box,” Creed said during the company’s earnings call Wednesday. “Traditionally at KFC, we’d have this sandwich promotion and then go back into buckets. I know many people eat out of a $20 bundle, but it’s still $20 on television.”

KFC has struggled for years amid weak sales and increased competitive pressure from the likes of Chick-fil-A, Popeyes Louisiana Kitchen and others. KFC’s unit count has fallen by about 8.6 percent since 2011, when the company had 4,780 locations. At the end of last year it had 4,370 units. Chick-fil-A has since passed KFC as the country’s largest chicken chain.

Operating issues and conflict with franchisees also plagued the system.

The agreement, however, signals that the brand and its operators are taking a more cooperative approach.

In exchange for control of marketing, KFC has agreed to pump $185 million into the brand over the next couple of years, including $100 million this year, executives said during the call Wednesday. The remaining amount will be invested in 2016 and 2017.

The investments also include $20 million a year in advertising, executives said during the call.

KFC’s U.S. business has generally been overshadowed in recent years by the company’s immense business in China and its rapid growth in numerous international markets — growth that continued unabated in the first quarter. KFC opened 72 units in the first quarter in markets outside of China. In China, Yum opened 171 new locations.

Yet the turnaround of Yum’s biggest brand in its home market would nevertheless be a key victory for the company that has worked hard for years to right KFC’s ship. Executives suggested that the agreement with franchisees would be an important component in maintaining its turnaround.

“We’re confident it will unlock significant value in the years to come,” CFO Pat Grismer said during the call.

“We’ve had good, consistent growth across all dayparts,” Creed said. “We’ve done that with innovation, with very disruptive advertising, improved customer service and a great value. That’s why we’re delivering such consistent performance.”

Creed said Taco Bell’s profit growth has come because the chain has been strategic about raising prices, which has helped it avoid losing its value message while also improving margins.

Creed noted that the company raised prices when it introduced new products or when it offered a new value message.

“We feel very good about where margins are at with Taco Bell,” he said.

Turning the China business around

Yum officials also expressed continued confidence that its struggling China business would improve. Same-store sales fell 12 percent in China during the quarter, undone by a food safety scare last year. But executives predicted sales would pick up in the second half of the year as it distanced itself from the incident.

Executives anticipated unit volumes to eventually return to 2012 levels. That was before the first of two health scares hurt the company’s brands there, especially KFC.

“There’s no doubt in our mind that unit volumes will return to where they were in 2012,” Grismer said. “It’s not a question of if, but rather when. But it’s not going to happen in 2015. But we remain confident in our ability to grow sales layers and with that will come improvement in margins.”

Turning around the China business, he noted, would unlock $600 million in operating profit.

Yum’s Pizza Hut division, especially in the U.S., has struggled. The chain’s same-store sales fell 1 percent during the quarter, and it is being outperformed by rivals Papa John’s and Domino’s Pizza.

Creed suggested that the company’s marketing surrounding its new “Flavors of Now” pizza platform introduced last year did not work. “We haven’t been as effective as we want with marketing,” he said.

Pizza Hut is working to gain customer insights, and is also working with franchisees to bring more competitive value, he added.