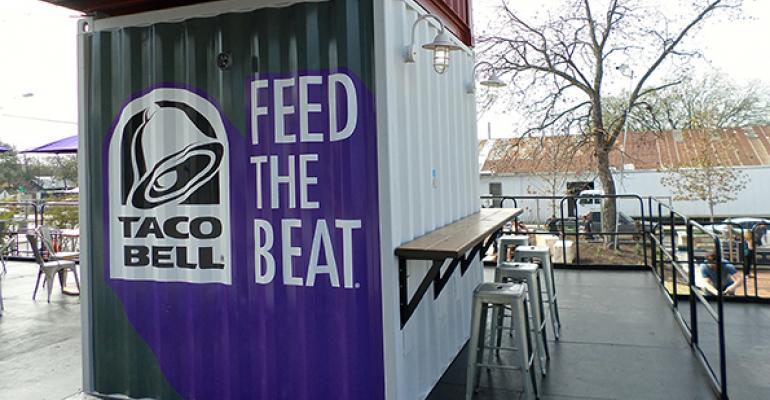 CEO Brian Niccol reveals what&rsquo;s next for the brand

As Taco Bell Corp. strives to “break out of the sea of sameness” at breakfast, CEO Brian Niccol has a broader plan to set the brand apart this year — including testing delivery and expanding its catering test.

Niccol, who stepped into the CEO role at Taco Bell in January after his predecessor Greg Creed became CEO of parent Yum Brands Inc., outlined ambitious plans for the coming year in an interview with Nation’s Restaurant News.

The initiatives are all part of an ongoing plan to position Taco Bell as a forward-thinking brand for Millennials and future generations in the rapidly changing quick-service landscape, according to Niccol. “I know a lot of people are talking about creating modern fast-food brands, and a lot are trying. But we’re already on our way,” he said. “We’re continuing to move Taco Bell into its own category.”

Beyond its plans for delivery and catering expansion, he says, the Irvine, Calif.-based chain will roll out a new loyalty program that will be designed for deeper digital engagement with the brand’s passionate fans.

Taco Bell will also open new units in shipping containers, restaurants with open kitchens, and units with a smaller footprint designed for urban locations. The new restaurants and packaging will be more environmentally friendly, and the chain is also looking at ways to become more transparent about food, including a possible switch to meat raised without antibiotics or hormones.

In addition, Taco Bell plans to continue its drive to up the ante at breakfast, with menu innovations like the biscuit taco, which launches nationally on Tuesday. Later this year the chain will roll out Cap’n Crunch Delights, which are currently in test.

Taco Bell is riding on about three years of success following a turnaround in 2012 that began with the launch of Doritos Locos Tacos, which at the time was the 50-year-old chain’s most successful product launch in history. Same-store sales shifted from a decline of 2 percent in 2011 to an 8-percent increase in fiscal 2012, and they have continued to climb since as the brand evolved.

Perhaps most importantly over the past three years, Taco Bell has found a sweet spot with Millennials, leveraging its Live Más marketing efforts both through social media and on television in ways that create buzz, like this week’s breakfast push that allows guests to take part in a rebellion against the sameness of other fast-food players — including McDonald’s.

Niccol, who was Taco Bell’s chief marketing officer during the turnaround and then president before stepping into the CEO seat, said the brand’s challenge is continuing to “ignite the unexpected.”

The offer of delivery, however, is likely to be a game changer.

Burger King offers delivery in some markets, and Starbucks is adding it later this year, but delivery is rare in the quick-service segment, where check averages are low and delivery fees could be seen as prohibitive.

Niccol said the goal is to position Taco Bell as an “on-demand brand.”

Details on how delivery might work are not yet available, but Niccol said some form of delivery will be in test by late this year.

“Even though it’s the No. 1 request from consumers, we have to make sure we can give them an experience that’s consistent with Taco Bell, and that’s what we’re working through,” he said. “We have to figure it out, and I can tell you right now we don’t have it figured out.”

Catering, however, is in test currently in the Houston market, he said. The test will be expanded to two or three more markets later this year, in time for football season, he said. “It probably won’t be everywhere this year, but, as we get near the back end, I wouldn’t be surprised that this will go well beyond the handful of test markets.”

This year the chain will also roll out online ordering from desktop devices, which will further support the expansion of catering.

Niccol said the natural next step of a loyalty program — which is also rare in the quick-service segment — will include a gaming component that promises to appeal to Millennials and next generations, though he declined to offer specifics.

“The people who download our app are our biggest fans, so we want to do a little more than what’s traditional,” he said.

Breaking from tradition is also behind the chain’s plan to offer new formats of restaurants to franchisees.

“We think we could do 100 to 200 of these container stores,” said Niccol, noting that the first one will open later this year. “But it has to be in the right climate and the right location for it to make sense.”

Long known as a drive-thru-focused brand, Taco Bell is also stepping away from the norm with its new urban units, which are roughly half the footprint of a traditional 3,000-square-foot restaurant.

The first of the in-line urban units under the new design are scheduled to be opened by a franchise operator in Chicago in May, he said. “It’ll be everything you love about Taco Bell but customized for the urban community.”

Niccol said future traditional restaurants will also be certified by the Leadership in Energy and Environmental Design, or LEED, which means they’re designed use less energy and water than conventional buildings and reduce waste and carbon dioxide emissions.

Along with the focus on the future, Taco Bell remains committed to “protecting the fundamentals,” Niccol said, including menu innovation, speed, service and value.

The brand, however, is also looking to stay in sync with emerging “foodie trends,” he said. The chain recently launched a new Sriracha Quesarito, for example, featuring the flavor of a hot sauce that Millennials love.

“Three years ago, that wouldn’t have been an idea that had traction because of the bigness of our brand,” said Niccol. “Now we have foodies in fast food who are looking for a food experience at a price they can afford.”

The chain is also working to get rid of the use of preservatives and artificial ingredients where it makes sense. “The trend is that people want less of that,” he said. “Where we can, and where there’s no trade off in craveability or food safety, let’s do it.”

Taco Bell is also working with suppliers on the possibility of using meat raised without antibiotics or hormones, Niccol said — a move McDonald’s announced earlier this year.

“We’re looking into it,” he said. “We have to stay in sync with emerging foodie trends, but also in sync with the quality and transparency that people are looking for in food.”

As Taco Bell strives toward its goal of reaching $14 billion in sales by 2022 and adding 2,000 restaurants in the U.S., Niccol said the chain has the distinct advantage of brand confidence.

“We know who we are. We’re proud of who we are,” he said. “We make craveable food really fast, and we are the value leader.”