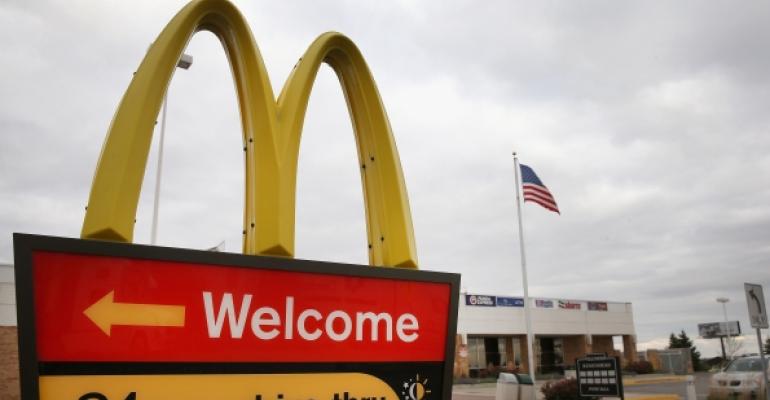 NRN editor and restaurant finance expert Jonathan Maze breaks down what you should be watching in the industry this week. Connect with him on the latest finance trends and news at&nbsp;@jonathanmaze and [email protected] RELATED: &bull; McDonald&#39;s and the problem with same-store sales &bull; Why McDonald&rsquo;s hired Robert Gibbs &bull;&nbsp;More restaurant finance news

The Golden Arches is getting smaller, at least in its home country.

According to an analysis Thursday by the Associated Press, McDonald’s unit count is expected to decline this year, too. The company is shuttering 700 locations and has halted growth while it looks to lift sales out of a two-year slump.

But McDonald’s is unusual. The chain’s annual growth is something observers have been able to count on since Ray Kroc first walked into a San Bernardino, Calif., restaurant in 1954.

McDonald’s has never recorded a decline in domestic unit count since 1970, the first year for which regulatory filings are available, according to AP. And until last year, its systemwide same-store sales had grown annually, too, in every year that records are available.

McDonald’s has almost 16 percent of the share of the largest 100 restaurants in the country, according to GE Capital. With $2.5 million in unit volumes and more than 14,000 locations, it has nearly three times the systemwide sales of Subway, the second largest chain in the U.S.

That kind of share is almost unheard of. The restaurant industry is highly fragmented, even though chains have taken up a greater share of it in recent years. Consumers are too fickle and too diverse, and their tastes change too often. That makes McDonald’s historic run all the more extraordinary.

But McDonald’s size might be working against it. Some say consumers are deliberately shying away from giant chains, especially as the economy improves and they get choosier with their restaurant decisions.

McDonald’s is a generalist during a time of specialization. Over the years, consumers have shifted spending toward concepts with narrow menus, giving quality credence to concepts with a specific niche. Burger consumption increasingly takes place at Shake Shack and Five Guys Burgers and Fries. If consumers want chicken, they go to Chick-fil-A for a sandwich or Popeyes Louisiana Kitchen for a spicier bone-in item. If they want Mexican, they go to Chipotle Mexican Grill. For soups and salads, Panera Bread.

Because of its sheer size, McDonald’s has to offer a broad menu. So it serves Snack Wraps and multiple types of sandwiches and a broad beverage selection and several desserts, not to mention breakfast. Even as it works to cut menu items, it also discusses methods for expansion and innovation to bring customers in the door. It’s a delicate balance.

Its menu size, according to many analysts, franchisees and the company itself, can further hurt matters by slowing service, a key element at a chain based on convenience. That further drives customers to other concepts, and even convenience stores.

So McDonald’s diminishing size is likely a necessity. It must close underperforming units and spread sales over fewer locations. It also needs to eliminate the distractions of opening new units while it finds ways to get back into customers’ good graces. And given that few expect the company’s sales to turn around quickly, this may not be the last year it shrinks.

Correction: June 19, 2015  Due to an editing error, an earlier version of this story misstated McDonald’s sales decrease in 2014.