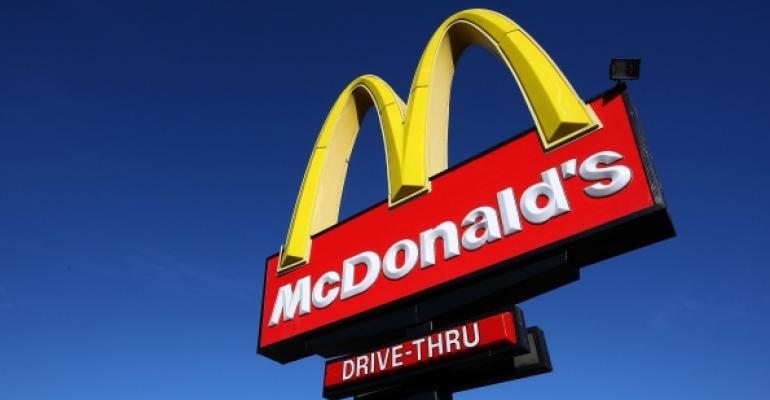 Company to return more cash to shareholders, nixes a REIT

McDonald’s Corp. plans to increase planned general and administrative cost cuts to $500 million, take on more debt and return more cash to shareholders as the latest part of its turnaround plan, the company said Tuesday.

The Oak Brook, Ill.-based quick-service operator plans to refranchise a total of 4,000 restaurants by 2018, and is planning for a long-term goal to be 95-percent franchised, the company said.

But McDonald’s nixed the idea of a real estate spinoff, a comment sure to disappoint some investors who viewed such a move as a key strategy for increasing shareholder value.

McDonald’s decided that a real estate spinoff would be too risky to the company’s relationship with its franchisees and its current turnaround. Executives also suggested that recent IRS comments that it is “concerned” that corporations were using spinoffs to avoid paying taxes played a role in the decision to not do a REIT.

“We do not view a real estate transaction as significantly compelling to move the brand forward,” Bensen said at the company’s investor day presentation Tuesday.

But executives suggested that they would pay closer attention to the value of the properties and land the company owns, and would consider opportunities to sell sites in which a McDonald’s is not the most valuable use. Bensen said the company has sold two sites for nearly $30 million, and expects to sell two more sites in the fourth quarter.

While McDonald’s avoided a REIT, at least for now, it opted to cut another $200 million from G&A spending, in addition to previously announced cuts of $300 million. McDonald’s said the cuts would come through its refranchising efforts, corporate streamlining and efficiencies in the company’s Global Business Services platform. The streamlining would be in “non-customer facing functions.”

McDonald’s also opted to sell more units to franchisees. The company initially planned to refranchise 3,500 locations to operators in a bid to get its franchise ownership percentage to 90 percent of units, from 81 percent now. It now wants to sell a total of 4,000 locations by 2018, which would bring that figure to 93 percent. Over the long term, McDonald’s wants to reach 95 percent ownership.

Additionally, executives said they plan to increase the amount of cash the company returns to shareholders. That includes a 5-percent increase in the quarterly dividend this quarter to 89 cents per share, or $3.56 per share per year.

But the company also plans to add a “meaningful amount of debt” to take advantage of current, low interest rates and return $30 billion in cash to shareholders for the three-year period ending in 2016, a $10 billion increase over the company’s previous target.

“The new leadership team is acting aggressively and with fresh perspective to improve all aspects of the business,” Bensen said. “We’re committed to raising the bar on all aspects of our financial performance.”

The moves come as McDonald’s demonstrates some early signs of a turnaround following three years of weakness that led to major management changes this spring, including the promotion of Steve Easterbrook to CEO.

Same-store sales at all of its major markets increased in the third quarter, including a 0.9-percent increase in its key U.S. market — its first increase in two years. McDonald’s USA president Mike Andres said during the presentation that the company outperformed quick-service burger restaurants during a week in September for the first time in 71 weeks.

Executives said on the call that they expect that sales growth to continue in the current quarter, and they praised the chain’s move to all-day breakfast in October.

“We have felt confident that we are getting traction in the business,” Easterbrook said. He added that all-day breakfast has thus far performed “a little above” where the company expected, though he noted that, “It will settle down at a certain rate.”

“We’re feeling good about a solid quarter,” he said.