McDonald’s 2014 performance may be worst in decades

McDonald’s Corp. will likely report its first decline in domestic systemwide sales in at least 30 years, following a year of historically poor performance.

According to a Nation’s Restaurant News analysis, the quick-service operator will report a 2014 decline in U.S. systemwide sales between 1.5 percent and 1.9 percent if it maintains the pace it set through November. The company will publish its annual report later this month.

That decline would end the longest run of U.S. restaurant sales growth for a single chain in history, growth that turned McDonald’s into the biggest, most recognizable restaurant brand in the world. Nation’s Restaurant News could not find a record that McDonald’s has ever reported a decline in domestic systemwide sales. 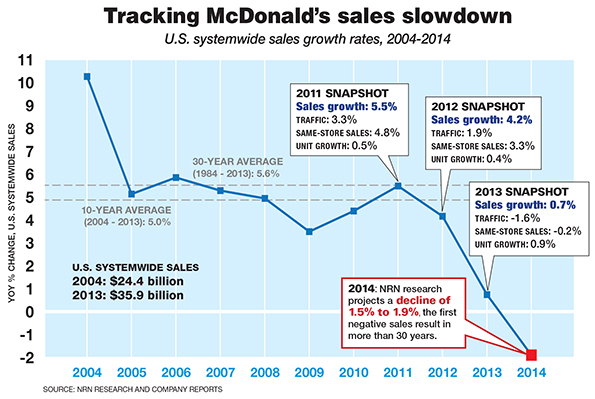 Even after what has become known as a “lost year,” McDonald’s still has higher unit volumes than its major competitors, and by far more units. But the sales numbers illustrate historic challenges the company is trying to reverse.

Efforts include a laundry list of strategies to improve service, marketing and give customers more customized menu options. McDonald’s has a seven-step “turnaround agenda” to fix its business this year. The agenda was sent to operators this month, and a copy was obtained by Nation’s Restaurant News.

The steps include improvements in training, food, speed of service, use of technology, more local marketing, different media strategies and a more aggressive response to negative attention McDonald’s receives.

McDonald’s executives have already announced and discussed many items in the agenda, such as its customizable “Create Your Taste” menu, more local control over menu decisions and an effort to regain its leadership as a family destination.

But it also highlights how the chain wants to “counter attack brand disparagers with continuous positive news on food quality and employment images.” McDonald’s has already begun to do so with new, positive ads.

McDonald’s 2014 sales problems were unique for the brand. Over the past 30 years, through 2013, McDonald’s U.S. systemwide sales growth has averaged 5.6 percent a year, according to NRN analysis.

Even in 2002 — a year in which McDonald’s posted its first quarterly loss ever — the chain still managed systemwide sales growth of 1.3 percent.

In 2003, McDonald’s started a decade-long run in which it used new products and dayparts to dramatically increase business at its domestic restaurants, despite adding relatively few units. Between 2004 and 2013, the chain’s systemwide sales grew annually by an average 5.0 percent.

But domestic sales and traffic have been trending downward in recent years. In 2010, guest counts rose 5.3 percent and same-store sales rose 3.8 percent. Guest count growth has slowed each year since, finally declining in 2013.

Same-store sales have been slowing, too. In 2013, same-store sales fell 0.2 percent for the year, the first time in a decade that its sales fell. That year, McDonald’s systemwide sales grew only 0.7 percent.

Observers have speculated that McDonald’s is losing business to fast-casual competitors. Chains like Chipotle Mexican Grill and Five Guys Burgers and Fries may have taken some of McDonald’s business.

But analysts suggest that the biggest beneficiaries of McDonald’s weakness have been its direct competitors — other quick-service burger chains, which have similar price points, speed of service and drive-thrus.

Steve Crichlow, a consultant who works with franchisees from various brands, suggested that McDonald’s is “not in touch with their core customer.” In the past two years, it has focused on promotional items, not its core burgers, he said.

A Big Mac promotion that began in December, Crichlow said, and was supported with ads the last week of the year and into January, seemed to be lifting sales recently.

“If management doesn’t monkey with it, this promo could be the turnaround catalyst they need,” he said.

McDonald’s struggles may also signal saturation in the U.S. restaurant business. Consumers have many more choices for dining out than they did in 2002, when McDonald’s previously struggled.

“If you compare it to a decade ago, when Wendy’s and Burger King were on the ropes and under new management and struggling to find direction, we didn’t have the competitive scene we have today,” said Richard Adams, a former McDonald’s franchisee turned consultant who works with many McDonald’s operators.  “And there are fast-casual opportunities out there, convenience stores, grocery stores. That hardly existed 10 years ago.”

The effect of McDonald’s 2014 sales decline on the restaurant industry is difficult to overstate.

McDonald’s unit volumes are among the highest in the limited-service segment, and its unit count is second only to Subway. As a result, its domestic systemwide sales are nearly three times larger than the next largest U.S. chain, Subway, and more than four times larger than the country’s next biggest quick-service burger chain, Burger King.

McDonald’s sales represent 14.6 percent of the total sales of the 200 largest restaurant chains in the U.S., according to the NRN Top 200 census. It accounts for nearly 50 percent of the Top 200 limited-service burger market.

Even after the decline in 2014, McDonald’s remains a massive juggernaut, with more customers than any other restaurant brand.

“I don’t think things are as bad as some people are reporting,” Adams said. “It’s not the end of the world.”

But to put McDonald’s $681 million sales loss into context, the amount represents more than the systemwide sales of such chains as Long John Silvers, California Pizza Kitchen, Krispy Kreme Doughnuts and Del Taco. Put another way, if all those McDonald’s customers went to Burger King, that chain’s same-store sales would grow 8 percent.